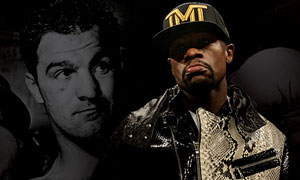 'Everyone was trying to make a fast buck and to hell with the sport’s history.' Rocky Marciano's brother says he rejected a ringside seat for Floyd Mayweather vs Conor McGregor, reveals Matt Christie

Peter Marciano says he turned down a ringside seat at the T-Mobile Arena for what he described as “a circus”.

Mayweather’s 10th round stoppage means he retires with a perfect 50-0 record, edging Rocky out of the record books.

Marciano retired in 1956 after 49 straight wins and according to his younger brother, that should also be Mayweather’s record.

“The Mayweather-McGregor fight should have been an exhibition,” said Peter, now 76 and still living in Brockton, Massachusetts where his brother was based.

“But it just seemed like everyone was trying to make a fast buck and to hell with the sport’s history.

“I’m surprised boxing historians weren’t up in arms saying: ‘Is this a circus ? What the hell is going on ?’

“I’m sure in his mind, Mayweather thinks he has broken my brother’s record by beating McGregor, but in my heart and mind, his record is still be intact.

“You can’t take anything away from Mayweather.

“He’s a great defensive fighter, but every time Rocky got in the ring, people got their money’s worth and can you really say that about Mayweather ?

“If Rocky was alive he probably would have been friends with Mayweather and taught him how to be a champion instead of saying the wrong thing and throwing money around.

“Mayweather would have benefited from knowing my brother.

“He knew how fighters should act so people respect them and their sport.”

Marciano’s last fight was a nine-round knock-out of Archie Moore in September, 1955 – his 43rd inside-the-distance win – and was killed in a plane crash 14 years later, aged 45.

“There have been a few stories about why Rocky retired when he did,” said Peter, “but the truth is, it got to the point where he couldn’t get motivated to train like he used to train.

“Nobody used to train like my brother. He used to work, work, work and because there was nobody out there to motivate him to go to the gym, he said: ‘I’m packing it in.’

“Floyd Patterson was coming through at the time, but he wouldn’t have lasted 30 seconds with Rocky.”

Watch what Floyd Mayweather has to say below: