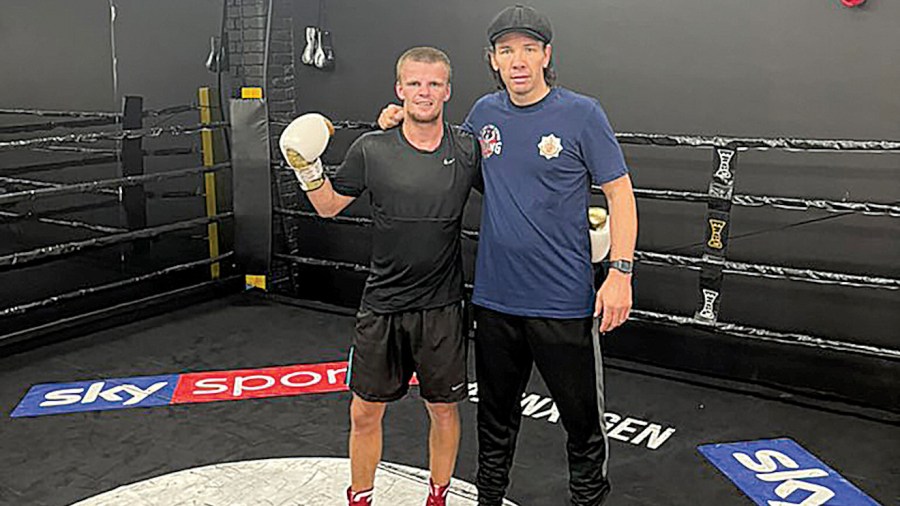 For Salford's Marc Leach, the art of juggling a boxing career with full-time work and full-time parenting is one he has had to learn to master, writes Elliot Worsell

FOR some boxers there is more at stake when fighting than there is for others. While the danger remains the same for all, some boxers, given everything they have sacrificed and all that is on the line, know they are just one defeat away from the end of a farfetched dream.

In the case of Salford’s Marc Leach, 18-1-1 (4), this is a thought he has had to entertain for much of his eight-year professional career. As a super-bantamweight, the 28-year-old finds himself plying his trade in a somewhat unglamorous division and has for many years had to juggle his boxing career with both full-time work and full-time parenting. His boxing life, therefore, is somewhat different than others. His need for victory is as great as it can possibly be.

“I used to be a warehouse worker in Argos, doing the night shifts,” he told Boxing News. “It was the only job that would fit around boxing and school runs. My boys both play football now as well, so I’m also a football manager. It’s always busy, busy, busy.

“At Argos, I was working either 6pm to 2am or 10pm to 6am. I’d then take the kids to school at 8am, pick them up at 3pm, and in between find time to train. I’d be getting two hours of sleep a day, which was a nightmare. I’d be training with migraines all the time and always feeling sluggish. But the last fight was the first time I had a proper camp and I enjoyed it. I hope there will be many more like that in the future.”

Last time out, in March, Leach’s future was at stake in a British title fight against Chris Bourke, a Londoner unbeaten in 10 fights. It was a fight Leach had to win, especially if his aim was to pursue boxing full-time and make a proper career of it, and it was also a fight he did win, comfortably beating Bourke on the scorecards after 12 rounds.

“I saw that as basically my first pro fight,” Leach recalled. “It was the first time I’d had a full camp and not had to work. I enjoyed the fight.

“In the past I’ve been fighting journeymen and they just come to survive. It’s been a bit boring and a bit disheartening. But when a boxer comes to fight and win, it brings out the best in me. When a journeyman just covers up and doesn’t try anything, it’s hard to stop them or get anything going. They just try to survive and it ends up being a bit of a nightmare.

“Over the years I’d not been getting the fights I wanted because I’m not this massive ticket-seller and I don’t have a big promoter behind me. I’ve not had any gifts given to me. I’ve had to do it all the hard way. I’ve grafted and fought for free and sometimes even been out of pocket myself because of this sport. I’m not in it for the money.

“But this is the stage now where money starts to come into it and I can look after my family properly. I can start rewarding them for suffering just as much as I do.”

The Bourke win, though a vital one, wasn’t without its issues, as the new champion explained: “Between rounds five and seven I hurt my hand – it turns out I split a tendon in my finger – but obviously the adrenaline got me through the fight and it didn’t change anything.

“My hand’s fine now. I was going to a hand specialist two or three times a week straight after the fight and it’s had more than enough time to heal. I’ve been sparring plenty and punching the bag and it’s ready to go. Now I’m ready for the next one and there will be no excuses come fight night.”

Next for Leach is a British title defence, his first, against the unbeaten Liam Davies, 11-0, on June 11 in Telford. It is of course another must-win fight and one that will move Leach a step closer to fulfilling his dream of winning the Lonsdale belt outright.

“Fingers crossed, if all goes to plan, I can win it outright by the end of this year,” he said. “We’ll see what happens next but I’d love to win that belt outright.

“Saying that, I’ve got to take whatever opportunities come my way. I’ve got two kids and money isn’t the best at the minute. The more you win, the bigger belts you get, and the bigger the money becomes. I’ve just got to keep winning and take opportunities when they come.”

As for Davies, his next opponent, Leach admits he knows very little about him, yet believes he has seen enough to be confident the British super-bantamweight title will remain in Salford.

“I’ve only seen one fight of his and that was years ago,” he said. “It was back when I boxed on Sky Sports and I remember I got a phone call saying if I gave up my English (title) I could fight for the British. I got s**t on with that, but I gave it up and he fought for it. He fought one of my old sparring partners, Sean Cairns, and that’s the only fight of his I’ve seen. That was obviously a few years ago now and he’s improved. He’s tall for the weight, he’ll come to put the pressure on, but it will be another masterclass from me, I reckon.”