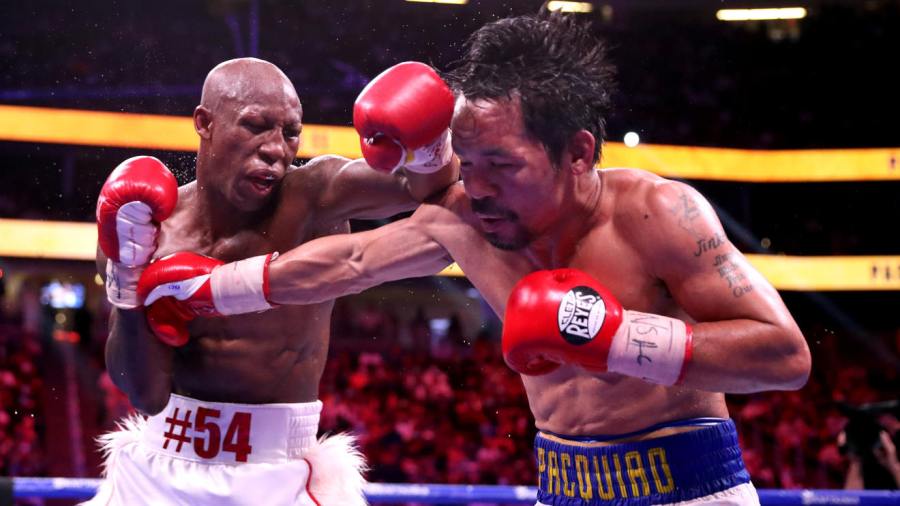 After one of the greatest of all boxing careers, the only thing left for Manny Pacquiao was retirement following his loss in August to Yordenis Ugas, wrote Matt Christie

THE eighth loss of his career did not feel like the other seven. Manny Pacquaio could justify, explain and then wipe those defeats from his mind. Aberrations, each of them. Injury. Poor preparation. Carelessness. Bad judging. The next time he stepped into the ring, he knew he could put it right. But the reverse he suffered at the hands of Yordenis Ugas over 12 rounds will be significantly harder for the old master to ignore. It wasn’t the most devastating or the most punishing, nor was it the widest deficit he’s suffered on the scorecards. Yet this one came with something that even Pacquiao will struggle to brush off: A full stop.

At 42 years old and after a decade of ups, downs, upsets and triumphs, the descent of Pacquiao, first hinted at when he toiled with Shane Mosley inside the MGM Grand in 2011, surely reached its end a few-hundred metres away at the T-Mobile Arena. “In the future, you may not see Manny Pacquiao fight in the ring,” he said after two scores of 116-112 and one of 115-113 (Boxing News scored it 117-111) were announced in the impressive Cuban’s favour in Las Vegas. “That’s boxing. I had a hard time in the ring making adjustments. My legs were tight but I did my best.”

That realisation that he did his best, that he trained diligently and was as fit as he possibly could be, will tell the warhorse all he needs to know about the clock that ticks inside all of us. It will only move quicker from this point forth.

Ugas’ win will be labelled an upset but he was a live ‘dog. Promoted from the undercard when Errol Spence Jnr pulled out with an eye injury 10 days beforehand, the 35-year-old was perhaps the most high-risk, low-reward late substitute since Vitali Klitschko almost shocked world heavyweight champion Lennox Lewis in 2003. Even in victory, Lewis recognised that same full stop that Pacquiao now faces. And fans of “Pac-Man” – as well as the sport – should perhaps be grateful it was Ugas, the No.4 welterweight, and not Spence, the No.1, providing it.

After all, boxing history is littered with too many muggings of the aged: Muhammad Ali beaten up by both Larry Holmes and Trevor Berbick; William Joppy thrashing Roberto Duran; Jack Johnson toying with James J. Jeffries; Mike Tyson’s depressing collapse against Kevin McBride; Joe Smith Jnr retiring Bernard Hopkins and, 14 years ago, Pacquiao himself feasting on the remains of Oscar De La Hoya. This was not as harrowing a bludgeoning but it can be argued it was just as revealing.

Though more lines are now etched into his face and his skin hangs slightly looser, Pacquiao looked just like Pacquiao at first glance. Smiling his irresistible smile and showing off a physique that looked typically fit for battle, he bounced to the ring on his famous sock-busting calves. But midway through the opening round those old legs were making errors, highlighting that something was amiss. Forced to overreach as a consequence of his misplaced feet, the square-on Pacquiao was clumped with a right hand counter as Ugas smartly held his position in centre ring. The underdog towered over his opponent. That is of course nothing new for Manny but it was apparent he couldn’t get inside like he used to. The Cuban’s jab was firing, his defence was tight. After four rounds, in which a case for Pacquiao winning could only be made in one of them, his most ardent fans among the 17,000 in attendance ignored the warning signs.

His coach, Freddie Roach, did his best to act upon them, however. Urged to throw more combinations before the fifth, Pacquaio dutifully attempted to follow instructions. Four punches were blocked by Ugas and he flung one of his own. The right hook – just as effective as his straight right – clumped Manny and rocked him backwards. Ugas stayed composed, his lead hand was busy and almost always bound for the target. Pacquiao jogged backwards, briefly brushed his right glove over the swelling that was growing around the same eye, and went at it again.

Pacquiao may have edged certain rounds on activity alone but he was out of ideas. He kept doing what he’s always done – motoring forward, throwing punches – but nothing was working quite like it used to. He had never looked so poor in a high-profile bout.

Ugas, meanwhile, was content to stay in the pocket, employing clever footwork and rarely allowing his defence to drop. The opportunities to take advantage of his ragged foe kept coming. Even in the ninth, when Pacquiao threatened to get on top, Ugas swatted his esteemed rival with two right hands to close the session.

Pacquiao needed to win the last three sessions to stand any chance at all. But buoyed by both the effectiveness of trainer Ismael Salas’ gameplan and the ineffectiveness of his opponent, Ugas arguably took all of them. At the end, there was a cut below Pacquiao’s right eye, another above his left. Yet he never stopped trying to find the elusive opening and gave his all until the final bell. Ugas’ features were swollen too – as much from his own fists that were locked to his temple as they blocked Pacquiao’s blows as the punches that actually got through.

“I apologise,” Pacquiao said, “I lost the fight.”

No apology is required from the greatest fighter of his era. He gave this contest and his entire career everything he possibly could. It was inevitable that the day would come when he had so little left.

The WBA welterweight belt was retained by Ugas and the referee was Russell Mora.

UNDERCARD
In an exciting bout, and in a nod to the future, young Filipino Mark Magsayo – who long idolised Pacquiao before becoming his stablemate – got up off the floor in round five to knock out Julio Ceja in the 10th. The featherweight contest had started quickly when Magsayo, also trained by Roach, scored a knockdown in the opening three minutes. But his lack of experience cost him as he was hauled into a gruelling fight. Dropped in the fifth from a savage blow to the body, Magsayo did remarkably well to recover before landing a huge right hand in the 10th that essentially ended matters. A follow up right sent Ceja – leading 86-83 (twice) and 87-82 – down for referee Kenny Bayless’ full count.

Elsewhere, both Robert Guerrero and Victor Ortiz gave their all but neither impressed in their exciting 10-rounder. The former, at 38, proved he had a bit more left when he won a close but unanimous 10-round decision. The scores were 96-94 (three times).