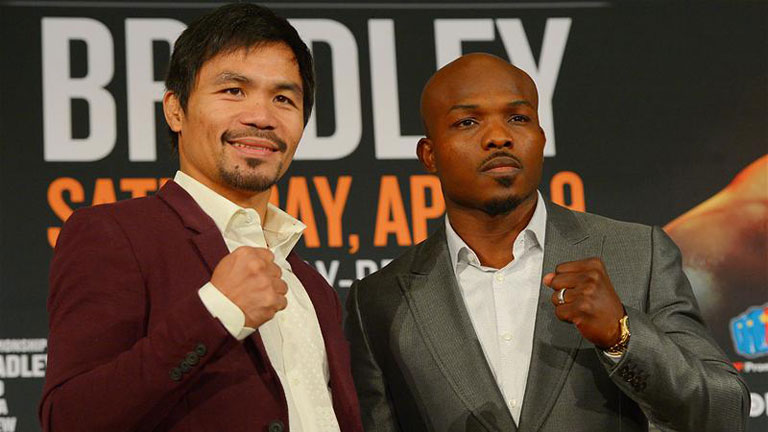 After one last fight, Manny Pacquiao will call time on his career, writes John Dennen

APRIL 9 could be the last time Manny Pacquiao enters a boxing ring. He will fight Tim Bradley at the MGM Grand but has already started saying his goodbyes.

“I’m so thankful for this great opportunity,” he said. “I’m going to retire, you’re giving me another chance in boxing to prove that I can still fight until the end.”

Even though he has fought Tim Bradley twice before, he explained why it was the fight he wanted. “This is a great opportunity and privilege to fight Bradley again,” he said. “I chose Bradley because I believe Bradley is different from before, when we had our last fight. He improved a lot, we saw that in his last fight against [Brandon Rios.”

Primarily he was grateful for his fans. “Maybe this is our last time to see each other. I give thanks for all your support. Without you … we’re not here,” he said.

Pacquiao also revealed why has decided to quit. “I’m happy to hang my gloves up after this fight because of what I have done. I’m sure I will feel sad, but that’s life. Not all the time you can keep fighting, not all the time you’re in the ring. But it’s time,” he said.

He will pursue his political career and run for the Senate in the Philippines. But he will remain as ambitious as ever. “I never thought that I could be a boxer. I never thought I could accomplish all this,” he reflected.

His promoter, Bob Arum, hasn’t come to terms with the thought of Pacquiao calling it a day. “I can’t believe it,” Bob said. “If this is truly the last time, Manny, it’s been a great ride and I want to thank you for everything.”