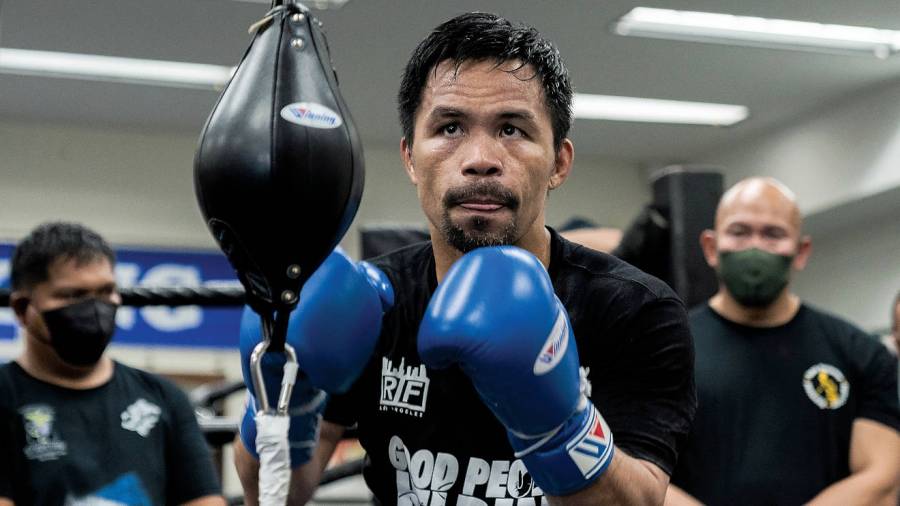 In the case of Mayweather, who today participates solely in exhibitions, there is perhaps no better measuring stick for Pacquiao’s greatness. For if we thought their 2015 superfight would be the defining moment for the both of them, we were wrong. So wrong. Six years on from that fight, what has become clear is that the result that night tells only one side of a story. The other side of the story is still being written and has been rewritten more than once throughout the six years that have passed since that ultimately anticlimactic night in Las Vegas. It is a story enhanced by Pacquiao’s wins over Timothy Bradley, Jessie Vargas, Lucas Matthysse, Adrien Broner and Keith Thurman and is a story currently being tweaked in 2021, a year in which Pacquiao agreed to fight Errol Spence, arguably the best welterweight in the world, and Mayweather fought Logan Paul, arguably the most powerful boxing influencer on YouTube.

Not done yet, Pacquiao’s decision to fight Spence, a man 11 years his junior, on August 21 in Las Vegas should not have come as a surprise to anyone. Ignore the fact it has been two years since he last boxed and what becomes clear, in the cold light of day, is that the decision to fight Spence was merely a continuation of a pattern Pacquiao has been following for a number of years.

Ever since losing to Jeff Horn in 2017, in fact, Pacquiao has made it his mission to show that age is just a number and that the current crop of welterweights are not a patch on their predecessors. He has stopped Lucas Matthysse in seven rounds, he has humbled Adrien Broner, and last time out, in July 2019, he dropped and dominated Keith Thurman. Only Pacquiao’s greatness made him the favourite in those fights and only his greatness then allowed him to win them.

Without this greatness, Pacquiao, 62-7-2 (39), would be just another fortysomething former champion, still chasing a dream that has long since become a nightmare. His punch resistance would by now have been reduced to breadcrumbs, his hands and feet would operate at a fraction of the speed of old, and his form line would consist of a series of defeats against men not fit to have been sparring partners during his prime.

That this hasn’t happened, and that Pacquaio continues to defy naysayers and logic, is a testament not only to the Filipino’s greatness but also new-age training methods and the diminishing standards of one of boxing’s old marquee divisions. The likes of Thurman, Broner and Matthysse are nowhere near being the best opponents Pacquiao has faced in his 71-fight career, nor are those three likely to have been anywhere near world titles back when there were fewer titles available and the world’s welterweights were the biggest names in the sport.

In Errol Spence, though, this theory was set to be challenged. In Errol Spence, Pacquiao was set to meet a fellow A-lister who perhaps would have been competitive in those times and, moreover, someone who, given his natural size and all-round ability, does perhaps rank alongside or at least compete in the same ballpark as Pacquiao’s best ever opponents. It’s what made the fight between them so fascinating, even at this advanced stage in Pacquiao’s career. It’s what also made it so potentially dangerous and what made its eventual cancellation (due to Spence suffering a retina tear) last week all the more frustrating.

“I am a politician and used to dealing with changing stances,” said Pacquiao. “For the first 30 seconds things looked a little odd in sparring, but I adjusted [from orthodox sparring to southpaw sparring] quickly, and it was business as usual.

“Naturally, I am disappointed but thank God the tear in Errol’s retina was discovered before it could be damaged further. I join his family, friends, and fans and pray that he has a full and complete recovery.

“As for Ugas, I am happy that he stepped up to replace Errol Spence. Ugas is a champion with a strong Cuban boxing background. This is a big fight, and we will give the fans an exciting show. He was given my [WBA] belt earlier in the year but now we get to fight for it inside the ring. That is the proper way to become a champion.”

Making hay from another man’s misery, Ugas now finds himself in the kind of high-profile fight he has for so long been chasing to no avail. At 35, he too is nearing the end of an accomplished career, both as a pro and decorated amateur (Olympic bronze in 2008 and World Championship gold in 2005), and this life-changing shot against Pacquiao could be considered just reward for his patience and perseverance.

In a pro career spanning 30 fights, Ugas, 26-4 (12), has fought the likes of Shawn Porter (a fight he was unlucky to lose) and Omar Figueroa Jnr (a fight he won) but has never been able to flee the mini league housing boxers of the high-risk, low-reward variety. Clever and durable, he is yet to be stopped as a pro, though has tended to rely on the judges’ scorecards to deliver victories of his own, thus giving him the reputation of someone not all too interested in drama and entertainment.

Nevertheless, Ugas has, since losing against Shawn Porter, strung together three straight wins and worked his way into position to fight Pacquiao on Saturday, albeit at short notice. It is the sort of opportunity a fighter like Ugas must grab with both hands and doubtless, given the road he has travelled to get here, this will be the plan.

It is also the sort of fight most fighters not named Manny Pacquiao would think twice about accepting, especially in light of the speed with which it was presented to him as Plan B. It is, unlike the Spence fight, a fight he will be expected to win and therefore a fight for which credit, in winning, will be in short supply.

Essentially, if the Spence fight was considered legacy-defining for Pacquiao, his key to an even larger degree of greatness, a hastily-arranged date with Ugas takes on more of the form of a banana skin. “Training camp injuries are part of the territory in boxing, though you hate to see a severe injury like the one Errol suffered,” said Pacquiao’s coach, Freddie Roach, who, upon learning of the opponent switch, employed three southpaw sparring partners to aid his man’s preparation. “In the 20 years Manny and I have worked together, he has never had an injury that postponed or cancelled a fight. That is amazing and a testament to Manny’s skills and conditioning. I have had to deal with opponent changes before but never this close to a fight. I’m not too concerned. Manny adjusts to any situation.”

Roach is seemingly determined to cast Ugas as a dangerman rather than a downgrade. It is a necessary stance, not only for the benefit of the promotion but to ensure he gets the best possible version of Pacquiao on fight night. “I had Ugas winning his fight with Shawn Porter,” said Roach. “Ugas goes for the kill right away. He likes to go for the home run when he throws his punches. He would rather win a fight by knockout than on points. There will be a lot of fireworks in this one. It’s a fight, that’s for sure, and the fact that Manny had the title he earned by beating Keith Thurman given to Ugas without any warning or due process has given Manny a big incentive to really perform on August 21. I think he’s really p**sed at this guy.”

Admittedly, it’s not easy to imagine Manny Pacquiao resentful of any man, much less a fellow fighter with whom he had no connection until about a week ago. However, if the level of danger this weekend depends entirely on Pacquiao’s ability to concentrate and not become complacent, it makes sense to manipulate narratives and invent incentives in order to guarantee Pacquiao doesn’t take his eye off the ball. The danger previously was Errol Spence Jnr; his ability, his size, and his youth. The danger to Pacquiao now, though, is as much Pacquiao himself as his replacement opponent.

For we must remember Manny Pacquiao is a big-time fighter, someone who excels on the grandest stage and when the stakes are higher than normal. He has, in such moments, managed to create a legacy by shocking critics and beating men he was not expected to beat and is today trying to dominate an era – the next generation – he has no right to be a part of, let alone dominate. It is the risk factor, and the brightness of the spotlight above his head, that ensures he is at his best every time he is asked to walk to the ring on fight night.

Take this away, dim the light, or put him in a fight he is meant to easily win, and sometimes – just sometimes – the Manny Pacquiao who turns up on fight night differs ever so slightly from the Manny Pacquiao expected to turn up. This, of course, was no better exemplified than in July 2017, when Pacquiao suffered his last defeat against Jeff Horn in Australia. That was another fight he was expected to win handily, despite the fact it was held in Horn’s home country, and yet Pacquiao struggled reaching the levels of old and found himself outhustled down the stretch before losing a controversial decision. The beginning of the end, some believed, only Pacquiao, as usual, had other ideas.

Since then, Pacquiao has won three fights on the bounce, beating men considerably younger and fresher than him. He has stuck around and backed himself and now he lurks among the latest class of welterweights like a mature student reluctant to turn his back on university life. Still on campus, still having fun with students half his age, he does a fine impression of someone he used to be but knows, as we all know, he is only ever one bad night or one bad style matchup from being reminded of his age and mileage in the most unforgiving way possible.

That moment is unlikely to come against Ugas, an opponent begging to be outworked by Pacquiao over 12 rounds, but it would be naïve to assume Pacquiao’s greatness – no match or substitute for youth – is enough to prevent it from happening again.

The Verdict Pacquiao should win on points but he’s at an age where a bad night could come at any time.