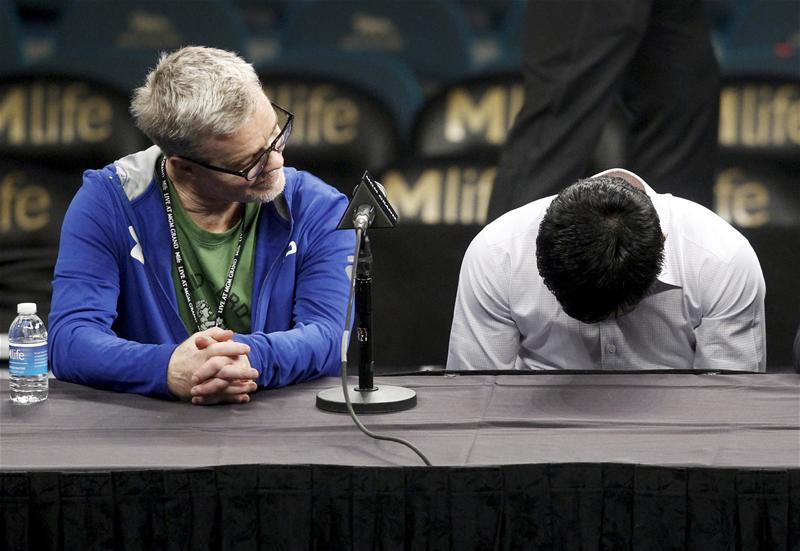 Injured Pacquiao believes he did enough to beat Mayweather

MANNY PACQUIAO admitted a shoulder injury hampered his performance but still believes he did enough to beat Floyd Mayweather in their 12-rounder at the MGM Grand in Las Vegas. The Filipino was adjudged a unanimous decision loser – much to the annoyance of the crowd – by scores of 116-112 (twice) and 118-110. Although the 36-year-old’s fans expressed their displeasure, the vast majority of the media felt the scores were fair.

“It was a good fight,” said a visibly sombre Pacquiao. “I thought I won the fight. He didn’t do anything.”

Manny promised to review the fight on “DVD” but seemed genuine in his belief that he should have won. Without question, he made things interesting during the first half of the contest and on Boxing News’ unofficial online scorecard he was all square after six. His energy and slashing combinations wobbled Mayweather in the fourth, and the American was uncomfortable in the sixth.

At the press conference after the fight, co-promoter Bob Arum revealed that Pacquiao had suffered a shoulder injury in the build-up. Pacquiao’s trainer, Freddie Roach, admitted they had considered pulling out of the fight only for the condition to improve. A Nevada commissioner was on hand to confirm that, while the initial injury was genuine, five days before the showdown Pacquiao’s shoulder was in good condition.

Manny revealed he felt pain in his shoulder in third. However, it should be noted that he had his best round of the fight in the fourth.

Pacquiao – who won the heart of Las Vegas with his infectious happiness in the build-up – added that he thought he was ahead on the cards and did not feel the need to get reckless at the end and chase the knockout.

“I thought I was up in the fight, so that’s why I didn’t attack harder in the 11th and 12th rounds.”

Mayweather vs Pacquiao – ROUND BY ROUND