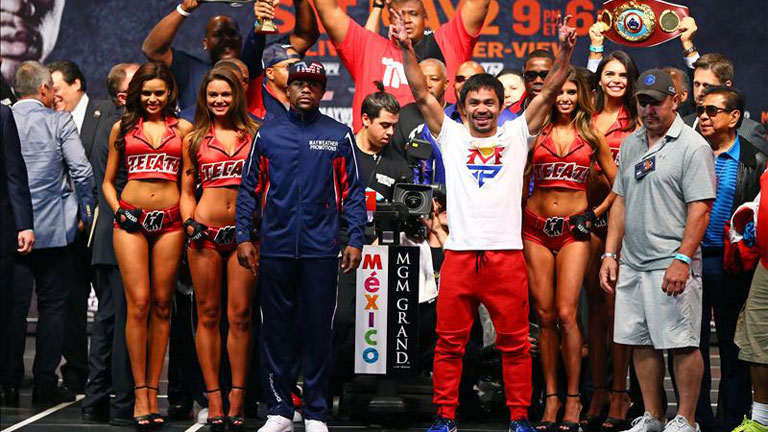 MANNY PACQUIAO may have lost to Floyd Mayweather last year, but the experience has not left him with any great fondness or respect for the best fighter of their era.

Pacquiao condemned Mayweather, insisting that fighters have an obligation to entertain in a contest. “He doesn’t have concern for the fans. His concern is only for money. My concern is not only for money, making money from the fans or the people, but is how I entertain the people, how I entertain the fans. Of course paying your money for the fight, that’s good, but we have to remember as a fighter your concern, your responsibility to make the people happy, to make the fans happy,” Pacquiao said.

Whether Conor McGregor is the Floyd Mayweather of UFC or not, Pacquiao can’t see elite boxers like himself or Mayweather taking on McGregor in an MMA event. “How can you fight a shark in the ocean? But if you fight the shark on dry land,” he laughed.

Manny’s immediate concern is his November 5 bout with WBO welterweight champion Jessie Vargas. That fight will not be screened on HBO but instead Top Rank will distribute it themselves. “HBO has been helping me many years ago. It helped me a lot. It just happened that when HBO gave us a time and date for the fight, I’m not available for that. It conflicted with my job in the Senate. I picked this date and they’re not available. There’s no problem,” Pacquiao said.

He duties as a senator however mean he will only be able to return to LA two weeks before the fight in Las Vegas. “I have to wait for the recess in the session,” he said.

Whether he can successfully combine being a prizefighter and a senator we will have to wait and see.