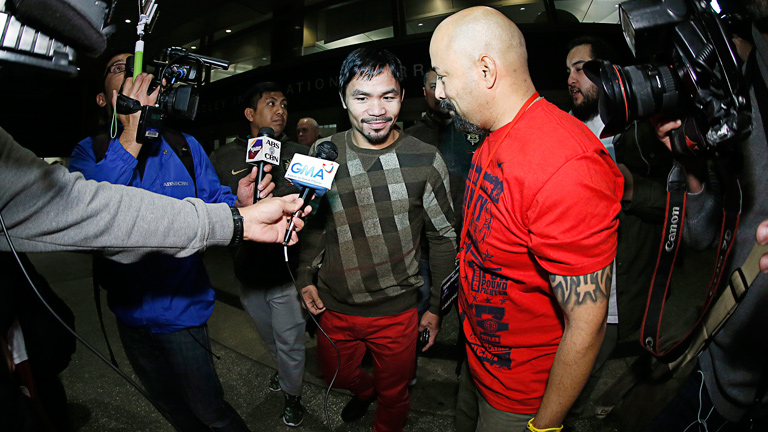 MANNY PACQUIAO touched down in Los Angeles on Monday to begin a press tour ahead of his third fight with Tim Bradley, the Filipino’s first since his wide points loss to Floyd Mayweather last year.

“I’m excited to get to this training camp because I’ve been resting almost one year, eight months,” he told Top Rank TV.

Immediately after his defeat to Mayweather, he complained of a shoulder injury but insists that it is now fully recovered. “The shoulder is good. Feeling 100% better,” Manny said.

Apart from Tim Bradley, Pacquiao did have other options, like Amir Khan or Terence Crawford, for what could be his last fight. Many thought Bradley fortunate to get a decision over Pacquiao in their first meeting and Manny decisively settled the score in a rematch with a clear points win. But Pacquiao maintained he needed to be careful in their third encounter on April 9 in Las Vegas. “I’m looking forward for more action,” the Filipino said. “We know Bradley, he’s improved a lot since our last fight. He’s improved a lot for this time.”

He outlined the plans for his preparation, saying, “We’re going to start my training in the Philippines and after one month we’re coming to LA to finish the training for the fight.”