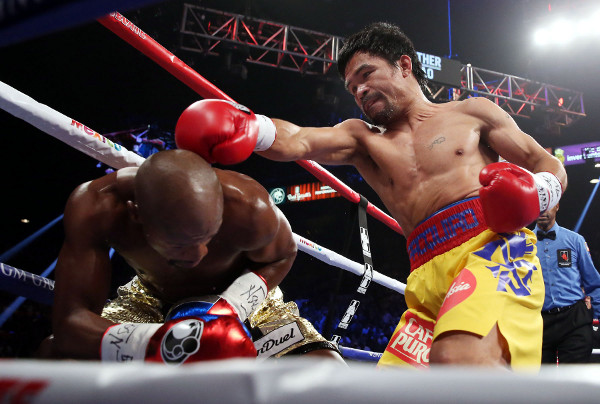 But could ‘shoulder-gate’ justify a Mayweather-Pacquiao rematch, wonders John Dennen

THE decision was not controversial. Even though Dave Moretti’s 118-110 seemed a touch wide, the 116-112 scores from Glen Feldman and Burt Clements were fair and Floyd Mayweather a clear unanimous winner over Manny Pacquiao on Saturday (May 2) at the MGM Grand.

But it emerged that, according to the Nevada Athletic Commission, mere hours before he was due to fight Floyd Mayweather, Manny Pacquiao was denied an injection to treat his injured right shoulder. “To understand the situation and ask all the questions we needed to ask and have consultations with the commission doctor and once that decision needed to be made, it was too close to the fight,” the commission’s Francisco Aguilar said. “On fight night at that time prior to a fight, the commission doesn’t even like to use Advil or any anti-inflammatory because it thins the blood and it potentially puts the fighter at harm. You want the fighter to be in a natural state so they understand how their body is reacting to the actual fight.

“If they can’t feel pain, that’s a problem.”

It frustrated Pacquiao’s promotional team but Aguilar insisted that the injury should have been revealed at the weigh-in the day before the fight, when they fill out a medical questionnaire. “On that medical questionnaire there are several questions. One of the questions includes ‘do you have an injury on your shoulder?’ and he checked no. Had he checked yes our doctors could have followed up with some additional questions to say where is the injury, what is the injury, do you have proof of the injury? He could have shared the MRI with those doctors and we could have figured out an opportunity for him to have the medication he claimed he needed.”

The injury was sustained in the weeks prior to the fight. Pacquiao’s trainer Freddie Roach said, “It was getting better every day. We thought one time about postponing the fight, as the weeks went it was getting better, getting stronger, he looking really good in the gym. I was happy with his performance, he was doing a lot better in lot sparring… I thought the progress was good enough.”

His promoter Arum added, “We felt that the work that was done on the shoulder during training would give him the opportunity to use the right. We were disappointed in the third round when the injury picked up again. It’s always the case with sports. A guy is injured in training, he then deals with the injury and thinks he’s conquered it and then he gets re-injured in the game.”

Pacquiao himself said the injury hampered his training and his performance in the bout. “We applied to the commission for the shot for numbing my shoulder but I respect the decision of the commission didn’t allow it. So we didn’t get a shot. Two weeks before the fight, one week before the fight my shoulder was getting better, it wasn’t totally recovered. At least I could use it but something [was] wrong,” he said. “The third round I felt the pain in my shoulder. That’s why when I threw punch combinations I backed off because it hurt. So that’s it.

“It doesn’t bother me because I put on a good fight, I did my best. I think the people will be very happy because even though I hurt my shoulder I didn’t complain in the ring. It’s part of the game.”

Pacquiao still thought he had done enough to win and his trainer Freddie Roach argued for a rematch, saying, “It was a very close fight. We’d love to do it again.

“I’m very proud of Manny, I thought he pulled it off.”

Whether ‘shoulder-gate’ is enough to justify a rematch, however, is another matter. Boxing fans tend to be skeptical of injuries revealed in the immediate aftermath of a bout, viewing them as excuses rather than explanations. It’s true that Pacquiao threw far fewer jabs than Mayweather, 193 to Floyd’s 267 according to Compubox. But then again, outjabbing Floyd Mayweather would be exacting task at the best of times. The demand to see Mayweather-Pacquiao was remarkable, the fight itself had to be delayed slightly while pay-per-view purchases flooded in. However this encounter was a notoriously difficult deal to put in place and a rematch would be all the harder to make, especially as enthusiasm to buy it would not reach such feverish levels. Nevertheless, despite defeat, Manny Pacquiao remains the most high profile boxer in the sport after Floyd Mayweather. That name might yet haunt the now undisputed pound-for-pound king.