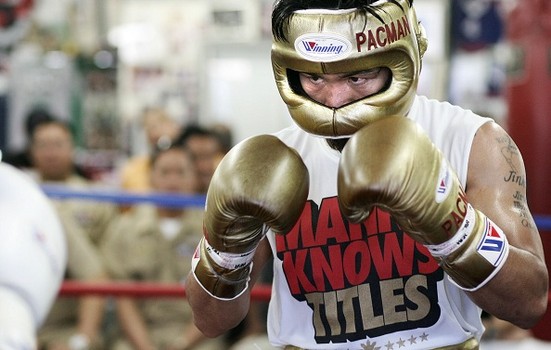 Manny Pacquiao is busting up his sparring partners as he prepares for Chris Algieri in their November 22 WBO welterweight showdown. Both Viktor Postol, the unbeaten Ukrainian light-welterweight, and Mike Jones have felt the force of ‘Pac Man’, who has not scored a stoppage victory since 2009.

Roach commented earlier this week that Manny Pacquiao is training “better than ever” ahead of the Macao outing and has now revealed to the South China Morning Post the extent of that form.

“Manny broke Postol’s nose three days ago,” Roach said. “But Postol’s okay. I train him. He’s a fighter, he’s a tough kid and he’s not going home,” Roach told the paper. “We still have three hard weeks of work in front of us. With three good sparring partners, it’s working out well. I have one more sparring partner coming over as a reserve, but I will use him as well..”

The revelations come days after Roach reported that Jones – a hard hitting welterweight contender – had been “hurt” by Pacquiao.

“We brought in some big sparring partners – Mike Jones is a really big puncher and so forth and Manny is doing really well with him and he’s hurt him a couple times in camp and he’s shown good power so far and he has shown the intensity that I want. When he hurts somebody he opens up on them and finished him. I told him if we hurt a sparring partner we just get another one. Training camp has been going really well and we have great sparring partners for this fight.

“I would love to see a knockout,” Roach continued. “I think at 147lbs he is a little smaller than most of the 147-pounders out there. We have to feed him five times a day for him to make that weight. This fight is at 144 and I think his power will come back. I see a knockout coming for sure.

But Manny Pacquiao, now 35, warned he will not go looking for a knockout against Algieri.

“We cannot go into the fight thinking about the knockout. A knockout will not change the result of the fight as long as we get the win. What we are trying to do right now is to get the focus in training and for the fight that people want to see. Chris Algieri is a very dangerous fighter and we are taking nothing for granted in this training camp.”