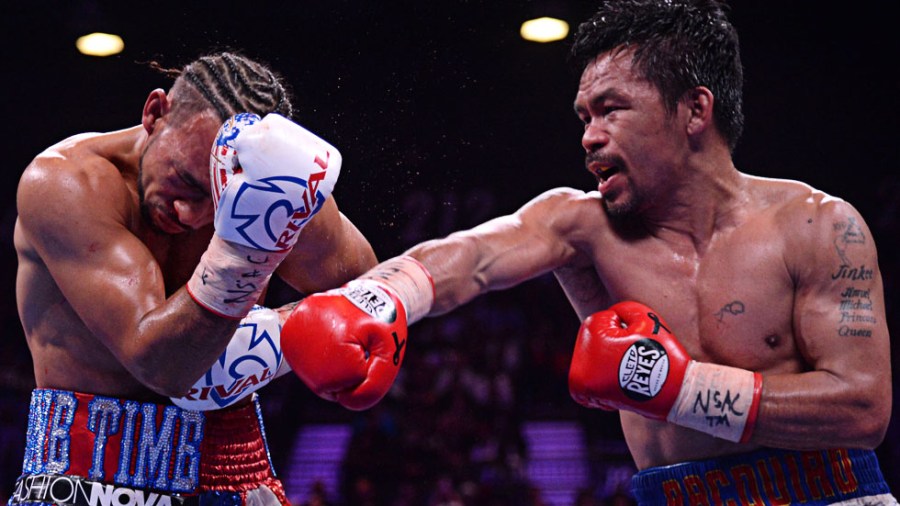 After beating Keith Thurman last weekend, Manny Pacquiao’s legend gathers pace but so do the accusations being aimed at him, writes Matt Christie

For some, though, it’s all a little too astonishing. The more the Filipino defies logic, the older he gets while beating fighters like Keith Thurman, then the harder it becomes for the cynics to accept that “Pac Man”, who started his professional boxing career 24 years ago as a malnourished light-flyweight, is a simply a force of nature. He’s collected world titles all the way up to super-welterweight while gathering speed and increasing his muscle mass and power. Therefore, say those cynics, he must have had help in the form of performance enhancing drugs.

The suspicions surrounding Pacquiao have been common since his peak, when he soared to welterweight and savaged the likes of Oscar De La Hoya, Ricky Hatton and Miguel Cotto. His form was awe-inspiring and his victories utterly devastating. A payment of $114,000 was made to Pacquiao in 2012 after he filed a lawsuit against Floyd Mayweather when the American accused the Filipino of cheating.

Still the accusations came as Pacquiao, approaching his mid-30s, stopped knocking people out, he lost to Juan Manuel Marquez and his form slipped from its highest heights. His critics suggested that Manny, afraid of getting caught, had stopped taking drugs and was no longer the force of before. Not exactly watertight stuff.

We can point to the testing procedures and pick huge holes in the process. We must continue to demand that the authorities unite to introduce the kind of year-round random testing capable of ending this kind of conjecture. Particularly in a sporting world where drug-use is rife and the cheaters go to great lengths to avoid being caught. But while doing all that we must also remember that Pacquiao has never been caught despite taking countless tests. Isn’t it something of a shame that our sport can’t unite to toast a living, breathing, fighting legend in a similar way that the tennis world all hailed Roger Federer’s recent exploits at Wimbledon?

In truth, the suspicion aimed at Manny is an admission that boxing, with its myriad governors and loopholes and lawlessness, is broken. Therefore, catching and punishing someone of Pacquiao’s standing for cheating would prove that those in power are least willing to try and fix it.

Again, it’s all a little unfair on Pacquiao. Let’s not make him the scapegoat for a widespread problem when there’s no evidence to suggest he’s involved. He’s never had to blame contaminated meat or been caught with an intravenous drip in his arm shortly after a weigh-in. He’s never wished an opponent dead or damaged the sport’s reputation in any way. For now – in the aftermath of another stunning victory – let’s do the right thing by Pacquiao and give him his dues.

Because if we examine only the facts at hand, if we look at his supreme accomplishments and the fighters he has beaten, if we recognise the fearlessness he’s exhibited when testing himself against bigger and younger adversaries, then the only conclusion to draw is that Manny Pacquiao is one of the greatest of them all.