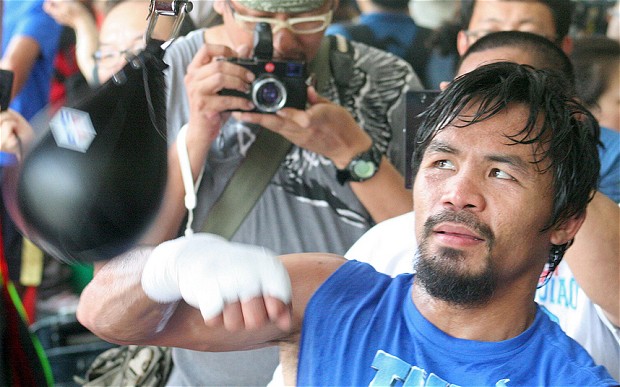 MANNY PACQUIAO will defend his WBO welterweight title against Chris Algieri on November 22 at the Cotai Arena within the Venetian Macao, in Macau, China. The bout will be screened in the USA by HBO PPV.

According to ESPN, the two parties came to an agreement on Tuesday night (July 15) and the contracts are expected to be signed today. After initial talks went well, Algieri’s co-promoters
Joe DeGuardia of Star Boxing and Banner Promotions’ Artie Pelullo sorted outthe final issues to their satisfaction.

Pacquiao’s promoter, Top Rank head Bob Arum, told ESPN: “I have to talk to my lawyer, Dan Pancheri, who will spit out the contracts first thing (Wednesday) morning so they can have a copy of it in the afternoon. We have a deal. On my end, it wasn’t a hard deal at all. I came up pretty much with what they were looking for and then Joe and Artie had to sit down with Algieri and cut it up fairly amongst themselves.”

Algieri looks set to earn over $1million for the showdown, which is 10 times more than he picked up for beating Ruslan Provodnikov, but is some way below what he initially asked for. That upset victory, which earned him the WBO light-welterweight belt, set up this chance.

The slippery and elusive, but largely unknown, American is a curious choice for Pacquiao when you consider the disappointing PPV figures that were posted for the Filipino’s April Las Vegas rematch with Timothy Bradley.