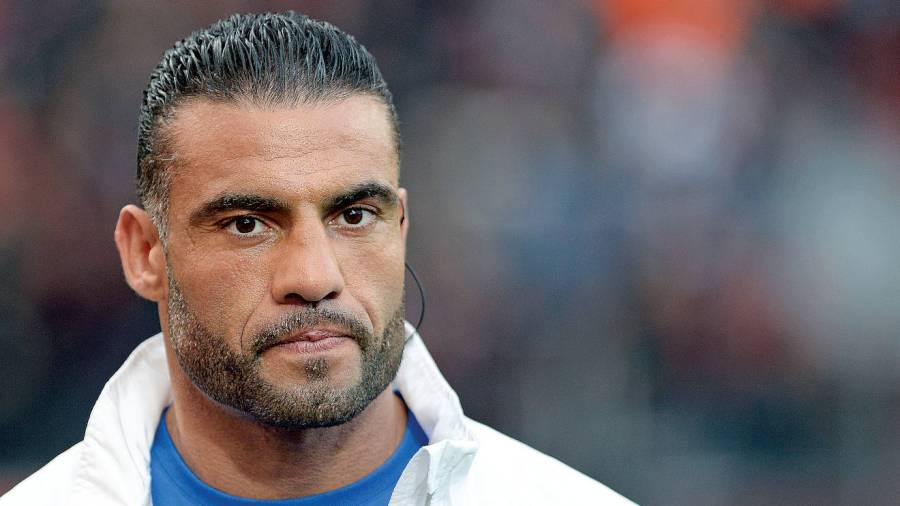 Should Tyson Fury and Anthony Joshua fail to finalise their fight this week, German-based Syrian Mahmoud Charr is ready to save the day, writes Elliot Worsell

AS heavyweights Tyson Fury and Anthony Joshua spend the early part of this week either discussing or denying the possibility of fighting in December, one man as interested in developments as anyone is German-based Syrian Mahmoud Charr.

An unlikely third wheel in this charade, Charr has emerged as a potential opponent for Fury should the Joshua fight fall apart and claims that, in the event of disappointment, he is more than ready to step in.

“I hope so,” he told Boxing News today (September 26). “I am waiting to see if Anthony Joshua responds and signs for that fight. I think if he doesn’t Tyson Fury has to fight me. I am ready.

“I have a signed agreement to fight the three (heavyweight) fighters of Frank Warren. I have the option to fight these three fighters: Tyson Fury, Daniel Dubois and Joe Joyce. I am ready to fight any of them but Tyson Fury is the first one I would pick. I want Tyson Fury.”

Known as “Diamond Boy”, Charr is now 37 years of age and boasts a professional record of 33-4 (19). He is not, despite his claims and a run of five straight wins, the opponent with whom the world would like to see Tyson Fury next share a ring, but that, he says, is beside the point. All that matters, as far as Charr is concerned, is that he gets the opportunity he has been looking for ever since agreeing to fight another big-name British heavyweight, David Haye, all the way back in 2013.

“My story in England is so long,” Charr explained. “I have tried to fight so many times in England. The first time was against David Haye, but two times David Haye cancelled the fight. I was there two times for press conferences.

“I was so happy to fight in the UK because I know the UK will love me. The UK want real fighters and I am a real fighter. When I was going to fight David Haye, I was thinking I would be the next ‘Prince’ Naseem (Hamed) there. I would be the first Arabic heavyweight champion of the world and I would try to make the same impact as Prince Naseem. But whatever. Now the time is coming with Tyson Fury and I hope the fight will be in Manchester or Cardiff.”

Though Charr makes it sound like a collision course, or somehow destiny, one assumes Fury will have options other than Mahmoud Charr should the Joshua fight, as expected, collapse under the weight of the myriad egos involved. Then again, given the fact he knows more about the situation than we do, perhaps it is Charr who is right and the rest of us who are wrong.

“He cannot look for another opponent,” Charr said, certain of it. “I am the only opponent he can fight. He has beaten Dillian Whyte in the last one. Who else is there to fight? I was the WBA (regular) champion from 2017 to 2021 (albeit a belt he never defended). I won my last five fights. I think I’m the number one contender for him. I fought (Vitali) Klitschko for the WBC title and Povetkin for the WBC contender (spot). I have fought many people. He has to fight me. I don’t think he can fight anyone else.

As for Joshua, seemingly the only man preventing Charr from securing his target, Charr said this: “Joshua cannot fight him. Joshua is mentally broken. He is coming off two losses. If Eddie Hearn (Joshua’s promoter) accepts this fight, he has to look for another job. He must change his business from boxing promoter.

“I would not allow Joshua to fight Fury because he’s mentally broken. In this fight Tyson Fury would hurt him very, very bad. Joshua needs two or three fights to get back.

“Joshua lost to a cruiserweight (Oleksandr Usyk) two times, not a heavyweight, remember. We cannot forget that. He lost two times to the best fighter at cruiserweight. Fury is a big super-heavyweight. He has no chance against him. AJ needs now to recover, win two or three fights, and then he can fight Fury at the end of next year.”

Charr, meanwhile, finds himself currently playing the waiting game. He is already in training for a Fury fight, which he hopes will happen on December 3, and he is, he says, more than ready to sign whatever contract gets sent his way in the coming days or weeks, even stating he would take the fight for “free” if that were to guarantee it gets made.

A testament to his confidence, both in terms of getting the Fury fight and then eventually beating him, Charr has already started to plot something of a UK residency next year. In addition to this, he has come up with a nickname he would like to adopt while basing himself on English soil.