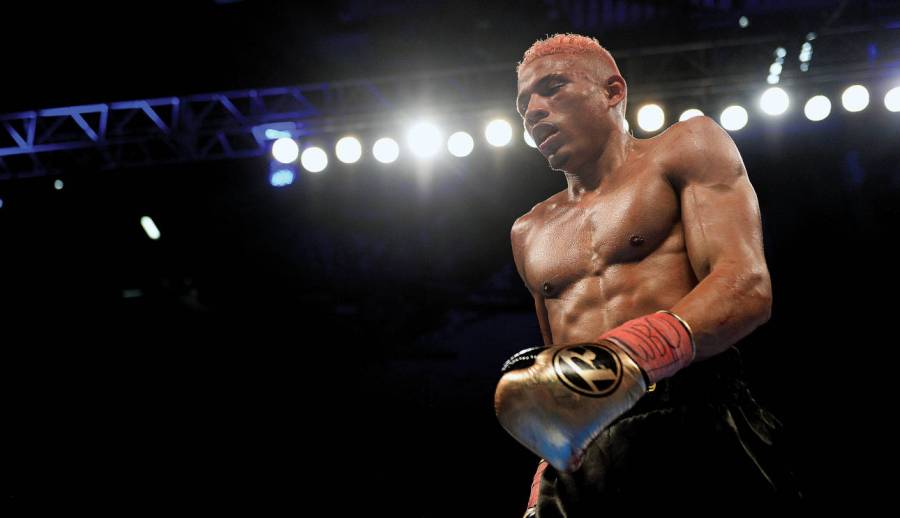 Lyon Woodstock’s patience has been tested like never before, as he explains to Elliot Worsell

ALTHOUGH Hackney super-featherweight Lyon Woodstock has always known the importance of patience, never has his been tested as much as it has in the past two years. Aside from the general chaos caused by a global pandemic, Woodstock has had his own uniquely personal stumbling block to overcome, in the form of a frequently postponed British super-featherweight title shot against Northern Ireland’s Anthony Cacace. That fight, postponed three times so far, has been Woodstock’s own kind of virus for almost two years, but has now, much to his relief, been rearranged for the fourth and latest time on August 28 in Birmingham.

The pair’s first proposed date – July 10, 2020 – fell by the wayside when Cacace, 18-1 (7), withdrew after suffering an infection following some dental work. There were then further complications which caused a second date – October 10, 2020 – to be pushed back as well. More recently, a date of February 27, 2021, as chief support to Carl Frampton vs. Jamel Herring, was scrapped when Woodstock contracted COVID-19 during fight week and had to isolate as a result.

“I’ve been working on a lot of stuff and I feel like I’ve grown up a lot during the two years I’ve had out of the ring. I’ve had time to reflect, time to grow, and time to look back on decisions I’ve made and the way I’ve carried myself, not just in boxing but in life in general: as a man, as a father. It has given me time to reevaluate things. I’m now looking forward to getting back in the ring and doing what I was designed and created to do.”

If good things come to those who wait, Woodstock will be forgiven for approaching his title shot later this month with high expectations and perhaps even a sense of entitlement. He will approach it, too, believing it is a fight Cacace, the champion, could do without. “I ain’t left. I’m still here. I haven’t gone away,” Woodstock said. “I don’t know if he [Cacace] still thought I would be here but I am. We’re going to fight and I’m ready. I just hope he is.

“There was nothing between us to start with but the way he has carried himself hasn’t been good. You can’t address me the way he has, and you can’t act the way he acts, when a lot of the reason why we haven’t fought is because of him. But that’s just the way it is. I’m not bothered. Our time will come. Just know that when I get in the ring, it’s showtime.”

In his most recent outing, back in June 2019, Woodstock came up short when trying to win the vacant Commonwealth super-featherweight title against Zelfa Barrett. A disappointment at the time, Woodstock has since managed to reframe the loss, his second as a pro, as both a learning experience and the lesson he needed to be taught.

“They were the defining moments for Lyon Woodstock,” he said. “Without them, the man I am today would not exist. I’m very grateful for that experience. I wouldn’t change a thing. It allowed me to look at myself and hold that mirror up and be 100 per cent honest with myself. We only see as far as our noses and a lot of the time we feel sorry for ourselves, but there is a polarity with positives and negatives. You’ll take from both whatever it is you need.”

Whereas most defeats tend to set a fighter back, stalling their momentum for a while, Woodstock’s loss to Barrett has done nothing of the sort. One could even argue a British title shot in his very next fight represents an upgrade. “That’s always something I’ve wanted to attain, even before I was a professional,” he said of the coveted Lonsdale Belt. “It’s a big belt and I have the utmost respect for it. Once I get in there, I’m taking it.”

Certainly, there’s no question Woodstock sounds ready for it. Having waited long enough, he has had ample time to think it over and has, better yet, used his time away from boxing wisely, working on himself, training his mind as well as his body. “I’ve never been afraid to hold that metaphorical mirror up and address myself,” Woodstock, 27, said. “I think a lot of people try to avoid that because when they do that they then have to hold themselves accountable for everything: the positive and the negative. A lot of people are not ready to do that, evidently. If you look at the world today it’s full of fabricated bulls**t. We’re surrounded by distractions. Years ago, there were more iconic and great people. Times were harder back then but because there were not as many distractions, in terms of technology, there was a greater emphasis on people and communication and thinking. People would sit still and think. People would focus. That’s what we’re lacking today: focus. We’re distracted by everything and we want to be distracted because it stops us having to think.

“All we have today are one-hit wonders and people looking for their five minutes of fame. It’s so easy to be in the public eye nowadays. Anyone can go viral. People wake up every day and go on social media to get their five minutes of fame. It’s not until you sit down and think about it that you realise how crazy the world is today. I’m looked at as the crazy one but I just think I’m normal, sitting in a world surrounded by madness.”

Lyon Woodstock, the thinking man’s fighter, has clearly done plenty of thinking during his two-year hiatus from the ring. But, on August 28, he knows that it’s time for action – at last.