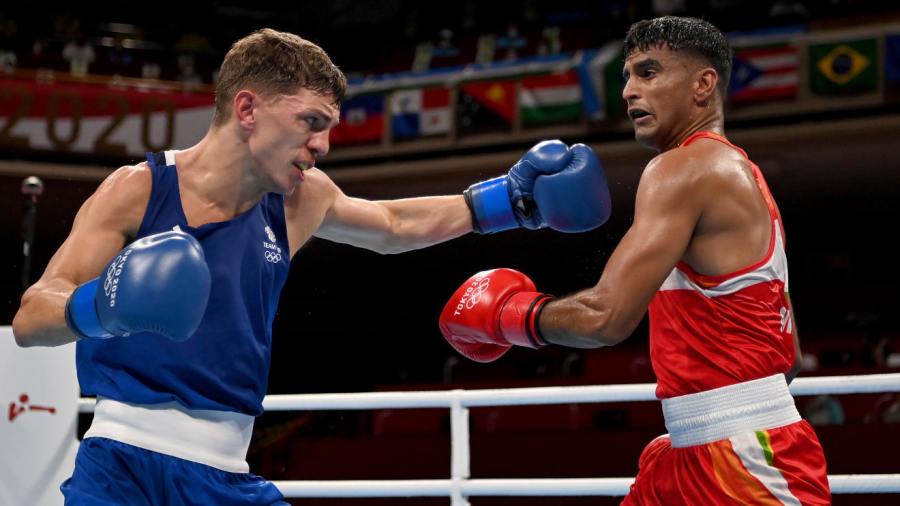 THREE GB boxers progressed on the second day of the Olympic Games at the Kokugikan Arena on Sunday (July 25). Luke McCormack at 63kgs was their most impressive victor, overcoming Indian southpaw Manish Kaushik on a split decision in a close, tightly contested bout. The first round was crucial. McCormack held the centre of the ring and slammed firm body shots into Kaushik’s stomach. The Indian came back, working in and out and landing flying left hooks. McCormack picked up his output just enough in the last round to take the win.

“He was a tricky opponent, a tough one to start off with. He’s a former World championship bronze medallist and he’s a good fighter, so I’m glad to have gotten the better of him,” McCormack said. “He was stepping off of me a few times for five seconds or so, and it felt like a lifetime, so I just had to keep getting onto him.

“It’s my Olympic debut so I’m glad to get the win.”

Morocco’s Rabab Cheddar came out quickly against Charley Davison, but the Lowestoft flyweight soon took the measure of her. The British southpaw soundly outboxed her opponent, drilling straight shots into Cheddar’s headguard and winning a unanimous points verdict. “I’d say I was about a seven out of ten, it wasn’t my best performance or at 100%,” she said. “I had a bit of ring rust and nerves even though I didn’t show it. With the first performance there’s always that wait and the anticipation.”

Ben Whittaker was the first Briton to box after Peter McGrail’s defeat the previous day. He faced Colombia’s Jorge Vivas Palacios, built like a bulldozer who marched forward blasting out heavy punches. But Whittaker’s movement was key. He rolled out from straight shots and pivoted away from attacks. Sliding through his own jabs, he intercepted the Colombian with quicker right hands as well. Palacios clipped him only occasionally as Whittaker worked through the bout. One of the five judges gave the Colombian the first two rounds, splitting the decision, but Whittaker was a fully deserved points victor.

“We had one of those days as a squad yesterday where we won one and lost one so it was a bit upsetting, but you have to just push on,” Whittaker said. “It’s a single-minded sport even though we’re teammates, so I had to just get on with it.”

Uzbek light-heavy Dilshod Ruzmetov frustrated Ireland’s Emmett Brennan. The latter tried to bore inside and unleash his heavy hooks. But Ruzmetov pocketed quick one-twos and wrapped him in clinches, dictating the contest to win a unanimous decision.

Indian legend Mary Kom is not ready to call time on her glittering career just yet. The 38-year-old battled through three rounds with Dominican Republic’s Miguelina Hernandez Garcia, 15 years her junior, to win a split decision and her first contest at these Olympics.