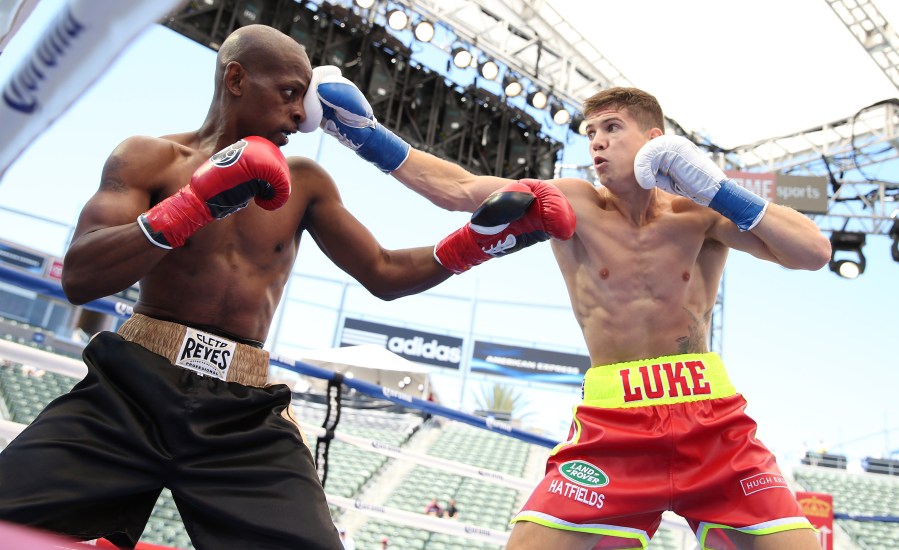 THE big story of the weekend was Kell Brook’s superb win over Shawn Porter to become IBF welterweight champion, but the undercard of that Carson, California show also saw British prospects Callum Smith and Luke Campbell extend their 100 per cent records.
Brook is promoted by Eddie Hearn, who got Smith and Campbell the opportunity to increase their professional experience by finding them slots on this card staged by Golden Boy. They were never going to be matched tough, because the object of the exercise was to give them a feel of boxing on a big US show.
Still, it was a bit surprising to see Campbell, the 2012 Olympic champion at 56 kgs, fight Steve Trumble, owner of a 13-30 (8) record that included 19 defeats inside the distance. Lightweight Campbell, now 7-0 (5), duly floored Trumble twice for a second-round knockout victory.
Trumble, a 38-year-old from Baton Rouge in Louisiana, had lost his previous four fights, two via first-round KO. He has now lost 11 of his last 12, 19 of his last 22. Yet if you go back further into his record, he wasn’t a bad fighter at one time. In May 2001 he survived two second-round knockdowns to stop Raymundo Beltran in the fourth. Yes, that’s the same Raymundo Beltran who last year received only a draw after appearing to beat Ricky Burns for the WBO lightweight belt and who in November challenges hotshot Terence Crawford in another bid for that title.
Within 12 months following the Beltran win, Trumble went in with Jose Miguel Cotto, who would go on to wobble Saul “Canelo” Alvarez in a 2010 light-middle bout; two-weight world champion Nate Campbell; Tanzanian Rogers Mtagwa, who would give Juan Manuel Lopez a hard distance fight at Madison Square Garden in 2009; future Erik Morales conqueror Zaheer Rahim; and former Olympic gold medallist Istvan Kovacs, a future WBO featherweight king in the pros.
All would beat Trumble before the final bell, as would Mikey Garcia – future two-weight world champion – in a 2007 bout. Presumably Steve settled into the role of ‘opponent’, parlaying his early wins into a decent pay cheque against boxers being groomed for big things. But he was a long way past his best when served up to Campbell and it’s unlikely the British Boxing Board of Control would have approved such a match in the UK.
As an Olympic champion (among many other amateur accomplishments), the Hull talent hardly needs protecting to such an extent. One hopes that, with this US sojourn out of the way, Campbell will be tested by better competition when the British season starts next month. Too many soft matches hinder, not help, a rising boxer.