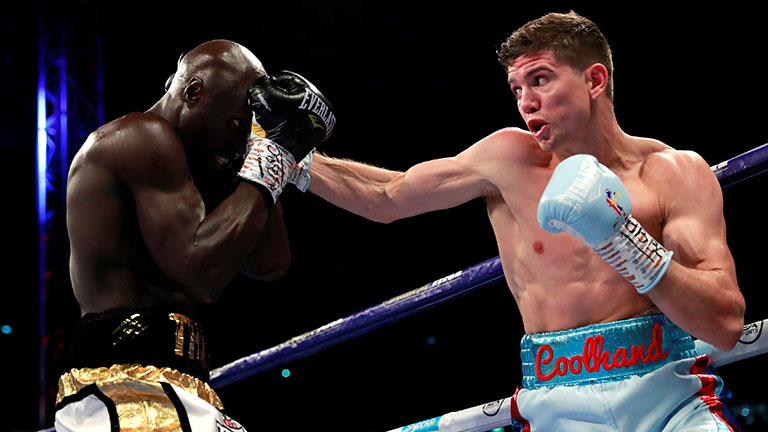 Luke Campbell will fight Vasyl Lomachenko for the WBO, WBA and (vacant) WBC lightweight world titles. He speaks to John Dennen about defeating the brilliant Ukrainian

FIFTEEN years ago Luke Campbell was in Saratov. Just a teenager, he was in the Russian city to compete in the European Cadet championships. It was the first time he met Vasyl Lomachenko.

Luke was only 50 kilos and, after first outpointing the Ukrainian in his division, ultimately took a bronze medal. Lomachenko was competing down at 46kgs. He won naturally of course. “All the way back then, he was a different weight from me back then, but very cool, very skilful, always has been,” Campbell remembered.

The Hull southpaw would go on to become one of Britain’s most successful amateur boxers. But throughout that time Lomachenko was widely regarded as the best boxer, at any weight, in the Olympic sport. Campbell won gold at the senior European championships in 2008, as did Lomachenko in the same tournament. Both boxed in the 2011 World championships. Campbell was held to a silver medal, Lomachenko won gold. Both triumphed at the London Olympic Games in 2012, by then Lomachenko was in the weight division above winning his gold at 60kgs, Campbell took the gold medal at 56kgs.

Now, 15 years down the line from their first encounter, they will fight. It comes at the highest level. Lomachenko is regarded as the best professional boxer in the world today, at any weight, and has already unified the WBA and WBO lightweight titles. The WBC have now ordered Lomachenko vs Campbell for their 135lbs crown. It will take place this year, possibly in August and potentially even in the UK.

It is something of a surprise. Campbell, like most observers, thought he’d box someone like Devin Haney for the vacant belt. The WBC though broke the expected precedent to order a unification for all three belts. “I think everybody was [surprised] really. Because he [Haney] is the next man in line to fight for the title. It was a shock because we were expecting to fight him. That would have been a great fight. I think I would have whooped Devin Haney anyhow but that would have been a fantastic fight on paper,” Campbell told Boxing News. “It is what it is. I’m not complaining. Everything’s about timing.

“I was going to fight him down the line anyhow. They’ve brought it forward. That’s fine by me.”

Wherever it takes place Lomachenko-Campbell will be a big fight. “I’ve never wanted to fight for an opponent and no one knows who the opponent is,” Luke said. “How many champions are there out there that nobody knows their name? I don’t want to be one of them. I want to be a world champion and everybody knows who I am.”

It is though as tough a fight as he could have. “Everybody’s going to be an underdog against Lomachenko. He’s ranked pound for pound number one. Everybody’s going to be an underdog against him,” Campbell said. “But I’ve always been underestimated, the whole of my career, from the day I started boxing. It doesn’t bother me that. I’m just excited now to go out there and show everybody what I’m capable of doing and how good I am. I’m fighting the best and I believe I’m one of the best, if not the best.”

The Englishman is as ready as he’ll ever be. “I’m the best I’ve ever been right now. I feel like I’m getting better and better. I’m the strongest I’ve ever been, I’m punching as hard as I’ve ever punched. I’m physically and mentally in a fantastic place,” Campbell said. “The last performance was probably the best to date really. I fought a very good kid, dangerous guy and made easy work of him [Adrian Yung]. First person to ever put him down, first person to stop him. It was only [last year] when he should have beat one of Top Rank’s best prospects [Erick De Leon]. So I’m in a great place.”

As far as he is concerned, now is the time for him take on the very best. Lomachenko is just that. “There is no blueprint out there for him. I’m going to beat him by being me. He’s fighting me,” Luke said. “Just like any other fight. He’s pound for pound number one, but it’s a fight at the end of the day. Anything can happen.”