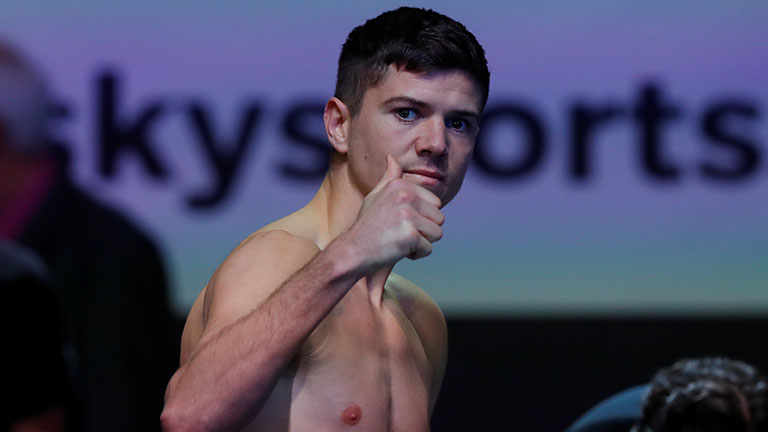 Luke Campbell joins new trainer Shane McGuigan and plans to take on the best in the sport, including Vasyl Lomachenko, writes John Dennen

LUKE CAMPBELL is back. Back in England and determined to work his way back to another world title shot.

The lightweight had been training in Miami with Cuban coach Jorge Rubio, but will now base his training at Shane McGuigan’s star-studded gym in London, alongside former team-mates and elite pros George Groves and Josh Taylor.

A step removed from the British boxing scene, Campbell, a former London 2012 Olympic gold medallist, had felt forgotten. “100 per cent. I’d been there [in Miami] two-and-a-half-years, away from everybody, Not only my family, but the media, from everything. I was away from it all. I had my head down, I worked hard, I built myself back up. Now, joining forces with Shane, I feel great. I don’t feel like I’ve scratched the surface of what I’m capable of doing, and I want to win world titles. I live for boxing day in, day out, and I’ll do whatever it takes to be the best,” Luke said.

Away from the limelight, Campbell had been suffering for his art. “I felt at the time I just needed to go away, be quiet, and just work. I needed time to learn, and to work hard,” he said. “But it toughened me up mentally – I was going to different gyms, different environments, sparring people and having to earn some respect. I’d be sparring Cuban amateur world champions, and unbeaten professionals from all over – South America, [North] America. I had to go and earn respect and it’s hard doing that on your own.”

He’s confident that new trainer Shane McGuigan will provide him with a crucial edge. “I wasn’t necessarily looking for a new coach, but I made a connection with Shane. I had a session with him, and from that one session I had I thought, ‘I’ve needed this; I want this.’ And a couple more sessions I thought, ‘This is definitely what I need’. Shane’s making additions to my style, adding to my attributes and this was what I needed. Every single box is ticked, and I finally feel only now that I’ve got some team around me, and I’m loving what I do, and we’re working hard,” Luke said. “I’m young and fresh with a big ball of fire burning in my stomach to achieve my goals.”

McGuigan intends to help the lightweight bulk up a fraction, so he’s bigger and more powerful at the weight. Campbell explained, “It’s only in my last two fights, this is how crazy [it is] I’ve never really had a team around me, telling me how to do things, telling me the changes, I used to make weight like an amateur from only two fights ago. I used to walk round 3lbs over my weight. Get in the ring at 138lbs and I’m fighting guys at 145+. No one ever told me any of that, I never had no guidance around me, developing me to be a pro. And it’s only in my last two fights. The Linares fight camp was the first time when I did the nutrition and weight properly, first time. It’s crazy. I don’t even feel like I’m scratching at the top yet from where I can go and where I want to be. I feel like you’re going to see a lot more of me and a lot more of what I can do and I’m excited by that.”

He hopes those improved performances will carry him back to world title fight, perhaps before the year is out. “I’m hoping to. I don’t know if it’s going to happen. But I’d love to be. I’d love to be fighting for a world title. We’ll just have to see how it plays out,” he said.

“They shouldn’t be kept locked away for six months, they should be available for new people coming up.”

His ambitions extend both to winning a world title and taking on the best in the sport in the biggest fights. The major name at lightweight is Vasyl Lomachenko, who most recently defeated Campbell’s conqueror Jorge Linares. “I’d love that. I’d love to fight [Lomachenko] in the UK if it came around. For me that would be an awesome fight. An Olympic champion [too]. I thought Linares was weight drained. Linares didn’t move his feet for three rounds. He just stood there. I looked from a picture of him weighing in against me to a picture of him weighing in against Lomachenko, it looks completely different, like the lights are on but no one’s in. He didn’t have the same trainer [for that fight]. He just looked he was just dead at the weight. Whereas the picture of him weighing in against me, he’s filled, he’s smiling, he looks completely different. After three rounds he started holding his feet and he still put Lomachenko down. In the scorecards there was nothing in it. He got hit with a body shot in the end but when someone’s weight drained – you go downstairs on them and they’re done,” Luke said.

“I see weaknesses in Lomachenko but I haven’t watched all the fight and studied it like that. So at the end of the day there’s weaknesses in anybody. The shot that Linares put Lomachenko down with, it wasn’t a massive shot. They all can hit, they all can get hurt. He’s a superb fighter. He’s class but I wouldn’t be phased in that fight one bit. If I win a world title and defend it against Lomachenko, it’s massive. These are the fights I want.”