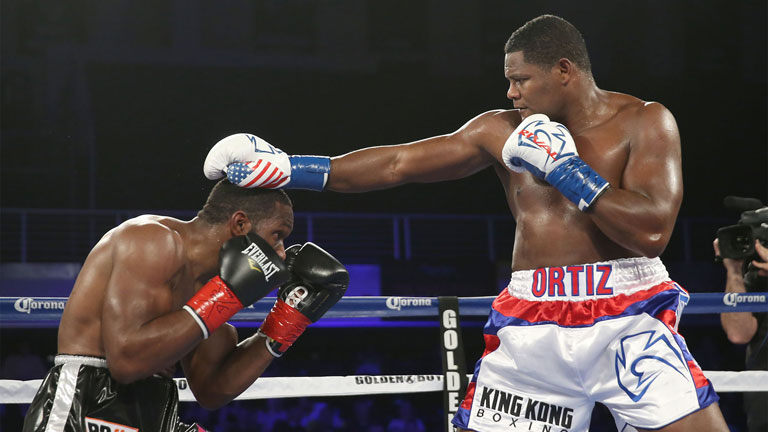 LUIS ORTIZ will box veteran heavyweight Tony Thompson over 12 rounds on March 5 at the DC Armory in Washington. On the same bill, televised on HBO’s Boxing After Dark, Sadam Ali will fight Jessie Vargas in a 12 round feature.

Cuba’s Ortiz is defending his WBA Interim title against Thompson so this fight has some significance, despite the American committing a doping violation, which emerged after Thompson’s victory over David Price, as well as Ortiz testing positive for Nandrolone after boxing Lateef Kayode in September 2014, a result which was therefore changed to a no contest.

Sadam Ali’s bout with Jessie Vargas is advertised as being for a vacant WBO welterweight world title. You might have thought that was a title Tim Bradley was defending against Manny Pacquaio. But, according to the WBO’s website, since January Bradley has ascended to the status of ‘Super’ champion, presumably creating room for a regular title.

“This fight is just another stepping stone on my path to becoming the unified heavyweight world champion,” stated Luis Ortiz. “I came to the United States to chase my American Dream and fighting at the nation’s capital is a dream come true. My life is coming full circle, and I know that this fight will put me a step closer to achieving everything I have worked so hard for in my career.”

“I’m happy to be back on HBO fighting for another world title,” said Tony Thompson. “If you look at my competition and his [Ortiz], it’s not even close. This isn’t the amateurs. I’m going to use my experience as a professional to take him places he’s never been. Odlanier Solis was a great Cuban amateur but he was also an Olympic gold medalist, and I beat him twice. Ortiz thinks he has it tough. I’ve been avoided for my entire career. Just about all my fights have been on short notice and in foreign countries. If I fought the guys Ortiz fought, I’d be undefeated too. If Ortiz is King Kong, I’m Godzilla; Godzilla coming to whoop some ass.”