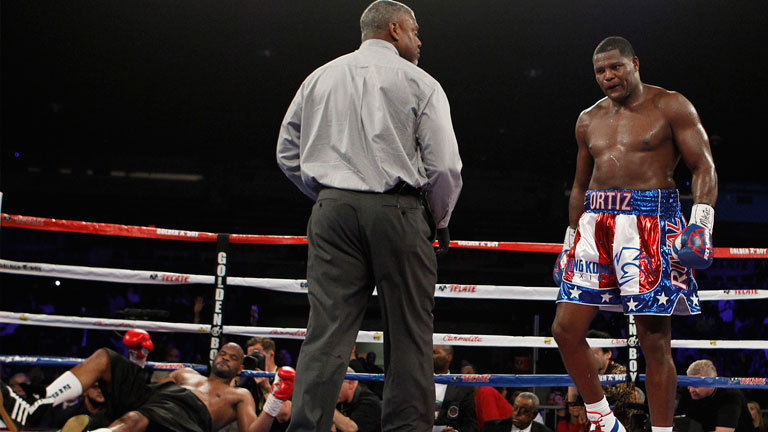 LUIS ORTIZ will be in a position to box for world heavyweight titles next year, and a fight with IBF champion Anthony Joshua would be ‘no problem’ to make, according to promoter Eddie Hearn.

The heavy-hitting Cuban was recently added to Hearn’s Matchroom stable and will top a stacked card in Monte Carlo on November 12 against Malik Scott.

Though the talented southpaw is well respected among the sport’s hardcore fans, Hearn intends to expose Ortiz to a wider audience in order to set up blockbuster fights with the division’s big guns.

“The Luis Ortiz news has certainly shook up the scene and he’ll fight anyone,” Hearn told Boxing News.

“The guys dealing with him are very smart, they appreciate and realise that people will only fight Luis Ortiz if there’s big money to fight Luis Ortiz, so we need to do a lot of work on his profile to make sure that when someone’s going to fight him, they’ll get paid well.

“We can do that and I want to get him out as frequently as possible, three times in the next three or four months, build his profile and then in 2017 he’ll be ready to fight ‘AJ’ [Joshua], [Wladimir] Klitschko, [Tyson] Fury, [David] Haye, [Joseph] Parker, he’ll be in those kind of fights because he’ll have the value by then. We know he can fight, he’s a fantastic fighter, so it’s just a case of making people aware of who he is and making sure the wider audience want to see Luis Ortiz in those big fights.”

When Ortiz – arguably the most feared heavyweight around at the moment – joined Matchroom, speculation began over whether he would be matched with cash cow Joshua.

Some skeptics felt the unbeaten Cuban would be kept well away from the IBF champion, but Hearn is more than willing to pit the two against each other, provided he can build Ortiz’ profile to a suitable level.

Hearn is still attempting to match Joshua with former division kingpin Klitschko next, and negotiations were likely to have been expedited by Fury vacating his WBA and WBO world titles.

Ortiz previously held the spurious WBA ‘interim’ world title though is still ranked highly by the organisation. Provided he keeps winning, Ortiz is expected to land a long-awaited legitimate title shot in 2017.

Hearn said: “He can fight with any governing body but obviously he’s been [ranked] with the WBA for a long time and 100 per cent the plan is to fight for a world title in 2017 but when a guy like ‘AJ’ or Haye or the other champions fight him, there needs to be value in it and it’s a big fight, a network fight in America etc. I think we can do that because he’s got the quality and he’s exciting to watch so once we spread the gospel I think it’s going to catch fire quite quickly.”