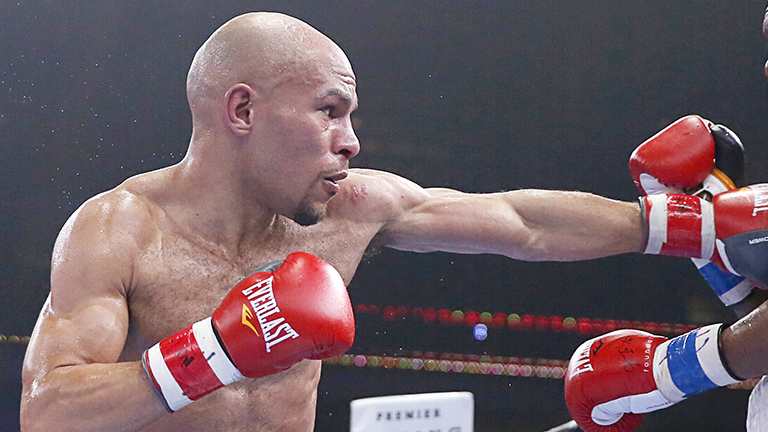 Undefeated middleweight prospect Luis ‘Cuba’ Arias (16-0) dazzled his hometown crowd in Milwaukee on Saturday night, knocking out the overmatched Darryl Cunningham (33-9, 13 KOs) in the fourth round.

“I knew from the jump I was in tip-top shape,” said Arias to the Milwaukee Journal Sentinel. “From the first round I could tell he was just trying to survive.”

Part-way through the fourth round, Arias battered Cunningham against the ropes with thudding body shots, causing his writhing opponent to retreat into a neutral corner.

An endless barrage of punches from all angles led to the referee saving the defenseless and distressed Cunningham from additional punishment.

With the official 4th round TKO result, Arias earns the vacant USBA middleweight title and is hopeful that his win brings him one step closer to a world title shot, despite suffering promotional setbacks while under Mayweather Promotions earlier in his career.

“It means the world to me,” continued Arias. “As a kid all I wanted was to be a world champion. … I’m going in the right direction toward it.”

In the co-feature, Minnesota’s Caleb Truax (27-3-2, 17 KOs) finished off Zachariah Kelly in the 2nd round with a crushing left hook to the body. The former title challenger returns to the comeback trail after his devastating knockout loss opposite Anthony Dirrell in April of this year.

“It felt great to get back on the right track with a KO win,” said Truax to Boxing News. “I hope to stay busy and fight again in October and eventually get back in big PBC televised fight in early 2017.”

Undefeated prospects David Benavidez, Malcolm McCallister, and Caleb “Sweet Hands” Plant may also be thrown around as possible future opponents for Truax, assuming he follows up Saturday’s victory with another this fall.

In the meantime, let us note that while all boxers dream of fighting in the biggest fights possible, a Caleb vs. Caleb matchup may be too tempting for the PBC matchmakers to pass up.