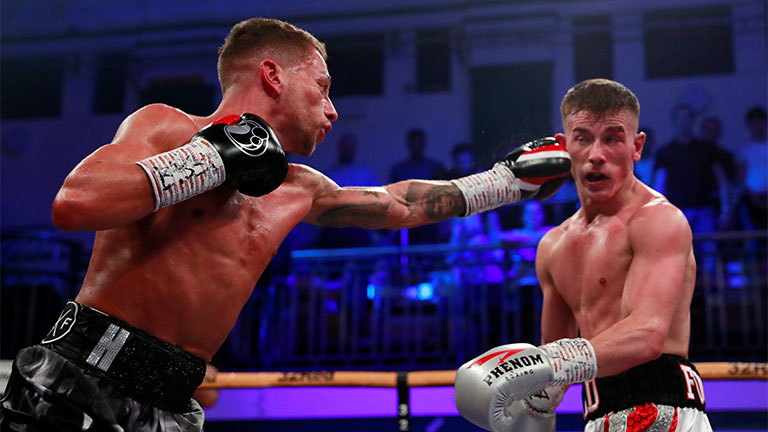 LUCIEN REID was unfortunate to come away from York Hall with neither the British nor the Commonwealth super-bantamweight titles. A majority draw saw Lichfield’s Brad Foster retain his championships.

But he had found it hard to get to grips with the elusive challenger from West Ham. Foster looked for Reid with hard punching combinations. Reid though was quicker on his feet, his movement throwing off the Lichfield man. Lucien stepped into clinches, with referee Phil Edwards having to separate them throughout the contest. But as he manoeuvred his way round Foster, Reid whipped in quick crosses, his sudden shots catching the champion off guard. Foster was dangerous with his own left hook, barrelling into Reid when he could set himself.

Reid seemed to have racked up the rounds but the judges had them tied with a majority draw. Ian John Lewis scored 116-112 for the challenger, rightly in my view, but Bob Williams and Terry O’Connor had it 114-114.

Coming to London on Mexican Independence weekend, swathed in his country’s flag as he walked into the ring, Hugo Rosendo Guarneros wanted to display his Mexican style of fighting. But Sunny Edwards had other ideas. The Croydon boxer dictated how the bout would be fought. Guarneros advanced on him to try to sling hooks through, but Edwards darted clear. Judging the distance expertly, moving his head and upper body to dodge punches, Sunny intercepted the Mexican with jabs and well timed hooks of his own, bringing Guarneros’ advances up short.

Edwards might look like he ought to be fragile but the visitor could not rattle him. The Croydon man understood just how to control their contest. Accurate hits brought up a welt beneath the Mexican’s left eye and Sunny never granted Guarneros the chance to pin him down. He won a dominant points decision over 10 rounds, shutting out Guarneros 100-90 for judge Pawel Kardyni and winning 99-91 on the cards of Terry O’Connor and Manuel Palomo. Bob Williams refereed.

Edwards added the IBF International and WBO Inter-Continental flyweight straps to his collection as he looks to enhance his rankings with those bodies and join older brother Charlie at world level.

Kody Davies overcame Zak Chelli in a fascinating British light-heavyweight title eliminator. Fulham’s Chelli started well, waiting and then flinging himself forward. His wild, overarm punches were heavy. Dangerous when he rushed in, he knocked Davies down in the second round. Kody however rose unhurt. Despite Chelli’s good start to the fight, as Davies adapted to him, the energy began to drain out of his work. The Welshman stood off with his hands low, but he picked his moments to close in and sink southpaw lefts to the body. Davies put his jab to work and drove Chelli into the corners of the ring, punishing him there.

Shakan Pitters dethroned Dec Spelman in a thrilling 10 round encounter to seize the English-light-heavyweight title. At six foot six Pitters towered over the Scunthorpe man. But in the opening rounds Spelman slipped his jabs and slammed in hooks up close. The heavy shots were hurtful. But gradually Birmingham’s Pitters began to hold him off, lashing in long shots. Pitters kept mobile, finding the mark with his jab. Both fought with furious intensity but the grinding impact of Pitters’ work drew blood from Spelman’s nose and nearly closed his left eye with a swelling. A tremendous battle concluded with Pitters taking a unanimous decision, Phil Edwards, Ian John Lewis and Terry O’Connor all agreeing on 97-93 in his favour. Bob Williams refereed.

Harvey Horn indulged himself for a moment showboating like a matador. He was afterall controlling his eight rounds with Elvis Guillen, countering the Nicaraguan and drilling accurate combinations into his chin and body. The Londoner took a clear 80-72 decision for referee Bob Williams.

Light-heavyweight Umar Sadiq overwhelmed Kearon Thomas, standing upright but catching him with back hand lefts. In the second round wide hooks heaved in to shake up Thomas, referee Bob Williams ending it at 1-42.

Belfast’s Caoimhin Agyarko put weight into vicious hooks to drive Nelson Altamirano on to the backfoot. His ferocious attacks had the Nicaraguan wilting beneath the pressure. In the third round Agyarko unleashed a storm of punches, stopping Atamirano at 2-53. Mark Bates refereed.

Portsmouth lightweight Mark Chamberlain was too sharp and dangerous. He overwhelmed Killamarsh’s Lee Connelly in just one minute and 38 seconds, trapping him on the ropes to pound his southpaw left and hefty right hook through his defences, prompting referee Bob Williams to wave it off.

Nicaragua’s Jose Hernandez kept Streaham’s Chris Bourke busy over the course of six rounds. He came forward with the occasional burst of aggression but Bourke lashed combinations into him and won 60-54 for referee Mark Bates.

Micky Burke tagged Petar Aleksandrov with crisp combinations, prompting the game Bulgarian to swing back freely. Burke, with a good variety, picked out cracking shots to make sure of a 40-36 points victory for referee Mark Bates.

The Verdict Sunny Edwards displayed his skills, with furious intensity on show in the other bouts.