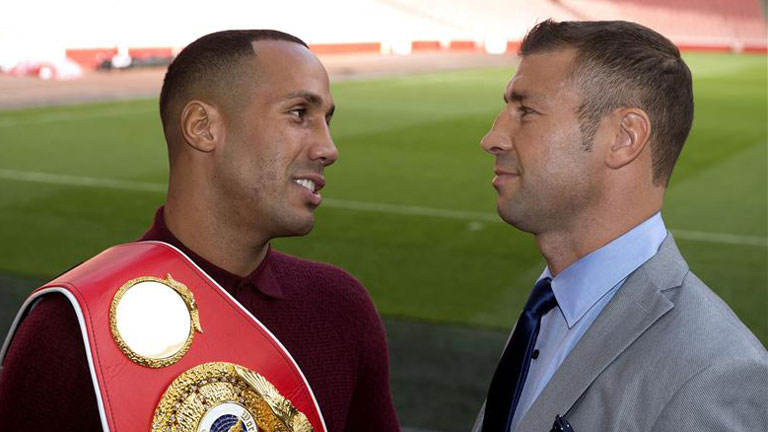 THE last time Lucian Bute was in Britain he took a savage hiding at the hands of hometown hero Carl Froch in Nottingham. Even considering the combatants’ reputations, the brutality of that May 2012 night was unexpected. Froch was thought to be past his best after being comprehensively decisioned by Andre Ward in his previous contest while the unbeaten Bute was considered one of boxing’s most dangerous men. Five shockingly one-sided rounds later, the roles had been reversed. Belatedly rescued by the referee after being volleyed into oblivion, Bute slumped against the ropes, his IBF super-middleweight title gone, and attempted to gather his senses. It would take the best part of three years.

“It took a long time to get over that,” Bute admits today. “It was difficult. It was my first loss, and I lost my belt and I’ve had doubts and injuries over the last three years. Before my last fight I took a break of 18 months. I was thinking a lot during that time. Now I feel good, I feel healthy. I have a new team and a new trainer. It will be okay, and I’m okay.”

He certainly looks okay. Dressed immaculately in a light blue suit that compliments his sunny complexion, and velvet loafers that positively ooze money, the Canadian is immediately charming and occasionally apologetic about his broken English. He is in London, at Arsenal’s Emirates Stadium, to announce a November 28 shot at new IBF 168lb king, James DeGale. The contest will take place in Quebec. It is the young champion’s first defence since defeating Andre Dirrell in Boston five months ago, and he heads to his opponent’s backyard – much like Bute himself three years ago – offering redemption to an ageing veteran. Bute is both grateful, and expectant.

“I’ve seen lots of his fights,” Bute says about his latest British rival. “I saw his last fight with Andre Dirrell in America. He’s a great fighter and he’s developed a lot. He’s confident now, and he’s a world champion now. I respect his decision to come to Canada and defend his world title against me. It’s his first defence, he didn’t have to take me on, and I have respect for him for doing that. It shows that he is a great champion. But I will get my belt back.”

Even though Bute will enjoy home advantage, it’s likely he will be a longer underdog than Froch was back in 2012. The reasons for this are obvious if you’ve followed Bute’s career since that disaster. He has fought just three times. Unsure of the right path he wandered into the light-heavyweight division and looked gun shy while being handily outpointed by countryman Jean Pascal early last year.

“My weight is 168lbs,” Bute declares. “It always has been. I’m a super-middleweight, like always. I should have stayed here. Going to light-heavyweight was too much for me.”

That contest against Pascal was a huge event at the Bell Center in Montreal, where the support was split between the countrymen. Against DeGale – at the brand new Centre Videotron in Quebec City – Bute will be, at the opening bell at least, the crowd’s undisputed hero.

“It excites me,” Bute says about the contest’s location. He’s smiling now, and no longer straining to break the language barrier. “When this fight was announced I saw the arena for the first time and it’s a great arena. It’s new, and it’s a nice place. On November 28, to fight in front of maybe 15,000 people, it will not be easy for James. The fans will support me. They will encourage me. They will push me. They will be there for me, not James. It will be an explosive night.”

So what’s changed? Why should we believe that Bute – now 35 and at an age where improvement is almost impossible – can return to the form that saw him enter Nottingham on the back of a 30-0 record, five years as IBF king, and nine successful defences? Bute understands why British fans may question him. But after the loss to Pascal, the Romania-born southpaw took stock, and changed his team. In came Howard Grant, a 1988 Olympian who never quite fulfilled his potential as a professional – he lost to Billy Schwer in Stevenage in 1994 – but is now blossoming as a trainer.

“I’ve been with Howard for six months and he’s helped a lot,” Bute reports. Certainly in his most recent outing – a four-round hammering of Andrea Di Luisa in August – some of Bute’s old spark had returned. “Howard has pushed me to be more aggressive, and to move my head, and to push my hands together. I will be prepared for the fight [against DeGale].”

Ghosts of the past will always haunt Bute, but by coming back to Britain, he’s faced his demons head on.

“I don’t want to make excuses about that Froch fight,” he says defiantly. “I lost. He was the better fighter on the night but things are different now. I’m refreshed, what’s done is done, I look ahead now. I am very confident that once again I will become world champion.”