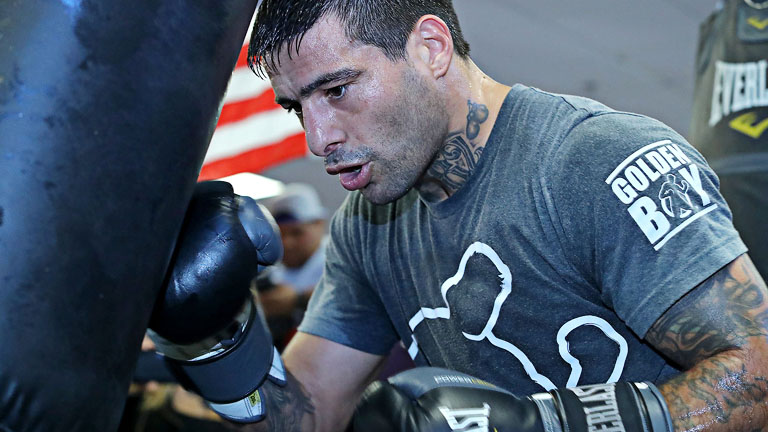 ARGENTINA’S Lucas Matthysse (38-4, 35 KOs) hosted a media workout in Indio, California ahead of his 12-round fight against Tewa Kiram (38-0. 28 KOs) for the vacant WBA welterweight crown on January 27, 2018 in a special double main event at the Forum Inglewood, California. In the second part of the double main event, Jorge Linares (43-3, 27 KOs) will defend his WBA, WBC Diamond and Ring Magazine lightweight titles against Mercito Gesta (31-1-2, 17 KOs) in a 12-round battle.

On the non-televised portion of the card, Marcelino Lopez (33-2, 18 KOs), who will return in 10-round super lightweight fight against a soon-to-be announced opponent, and Vergil Ortiz Jr (8-0, 8 KOs), who is preparing for his 2018 comeback on a soon-to-be announced card, also participated in the workout. Featherweight prospect and training partner of the fighters, Javier Martinez (4-0, 3 KOs), also was in attendance as he prepares to open the night of action in a six-round bout.

“Training camp has been excellent. I did a little bit of training in Argentina before coming here. to Indio. Training with Joel Diaz and the entire team has been great. I know that Tewa Kiram is a hard puncher and can fight on the outside, but on Jan. 27 I’ll become world champion. I’ve beaten the best at 140 pounds, and now I’ll beat the best at 147 pounds. A win against Kiram will put me at the top of the division.”

“Whether I not I know who my opponent is does not make a difference. I will still train hard. When I knocked out Pablo Cesar Cano, it was a great victory for me because he’s a tough former world champion. He’s fought the best and has fought to decisions with them as well. I finished the fight in two rounds, and I know I’ll be having bigger and better fights in the future because of that.”

“Lucas Matthysse is a great person and a funny guy. Sparring with him was great. You have to watch out because he hits hard and has a lot of tricks. I feel like I’ll do my best under the Joel Diaz training camp. I feel like I won’t slack off with him and do my best. Maybe in 2018 my knockout streak will end as I fight tougher and tougher opponents.”

“Whatever they put in my way in this new year, I’ll do. I’d like to fight more rounds and fight better opponents. I want to move up the rankings this year and be in very tough fights.”

“This fight with Lucas Matthysse was mandated by the WBA. This is a dangerous fight. He’s an undefeated puncher with a great style, and they’re both big punchers. I know it’s going to be a great fight, and I’m really looking forward to it.”