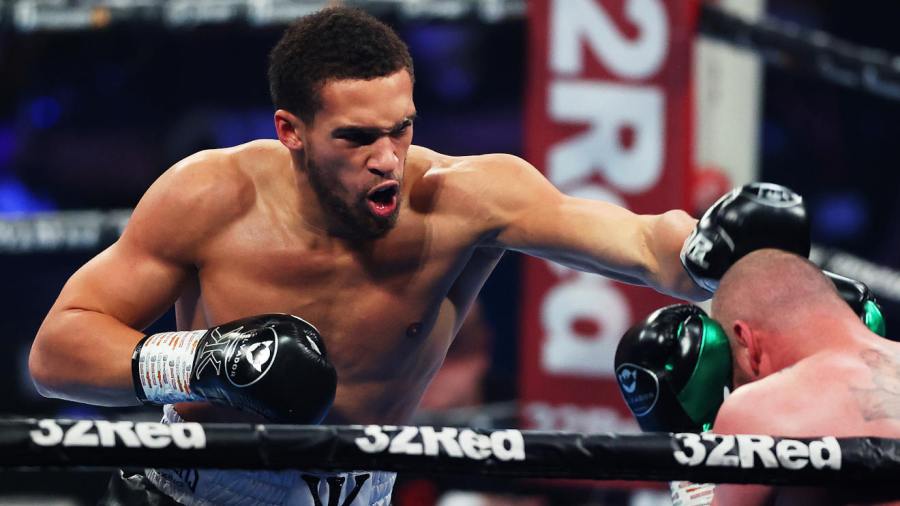 SEVENTEEN-year-old amateur super-heavyweight Enriko Itauma is certainly one to watch. It’s hard for the precocious talent to get bouts in the UK so he’s had to wait for the Youth European championships, in Sofia, Bulgaria from April 10-22, to finally get the chance to box again.

“I entered the nationals [this year] but everyone pulled out when I entered. I won the Europeans twice already,” he tells Boxing News. “Although I haven’t had many fights I got to share the ring with Joe Joyce, Lawrence Okolie, AJ [Anthony Joshua, in sparring]. It’s been kind of a blessing in disguise. I haven’t had a lot of fights but I’ve learned a lot from sparring. I was 16 at the time as well.

“Not a lot of people in the heavyweight and cruiserweight division move like how I move,” he continued. “I learned so much from Okolie, he was my first big step up in sparring.”

Limited opportunities to box have been a frustration. He’s achieved a lot, even if he reckons he’s only had about 15 bouts in the past eight years.

“I’m raring to go. I just want to get in the ring as soon as possible,” he said. “I haven’t boxed for just under two and a half years. I’d like to get the ring rust off me.”

After the Europeans he’ll be looking at the World Youth championships in November. “That would be the best thing I would win in the amateurs,” he added. “That’s my aim, winning World gold.”

Enriko’s older brother Karol Itauma was an Olympic Youth gold medallist in 2018. He’s now a professional boxer, who is still only 21 and will be out next on Frank Warren’s March 11 bill at York Hall.

“People always talk to me about the Youth Olympics, to me that’s all done, that was in the past. I live every day as something new, a new start and that’s my way of keeping me grounded and keeping me always hungry,” Karol said. “I’ve had five fights but to me, I’m back to square one every time.

“I’m grateful for the opportunities that I’ve been given but the thing that’s in front of me is more important.”

He last boxed on the undercard of Anthony Yarde vs Lyndon Arthur, a rapid, efficient first round knockout. “The atmosphere was crazy, a big card. The Copperbox arena is a beautiful arena and to have that many spectators there as well was beautiful. The fight didn’t last long. But that’s what it’s all about. It’s all about getting that experience and learning as each fight goes on,” he said. “There are going to be times when I’m going to have to show a different side of me. But that’s what it’s all about. Just taking them things as they come.”

The two brothers have trained together for years. “[Karol] started [boxing] at 14, I started at nine. He started a year before I did. When he won his first national title, I thought I could do this as well. Then two years later I won a national title,” Enriko said. “I still remember when I was nine years old, I was going running and I would cry. I wanted to stop. He was like, ‘No, you never stop, keep going.’ That’s what I learned – always be relentless. Never stop.