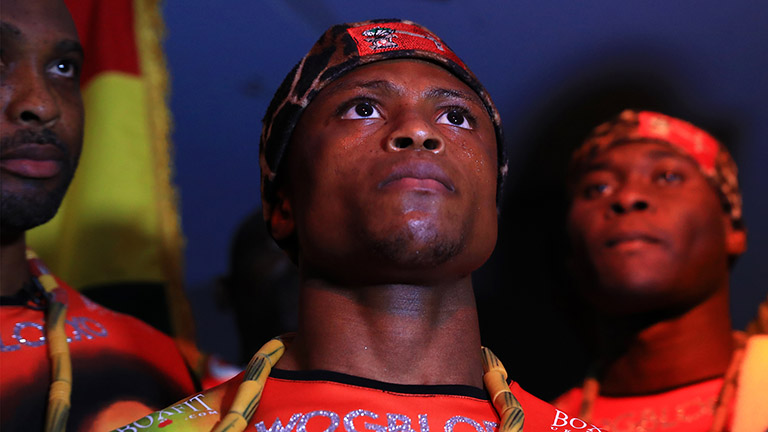 He fulfilled a prophecy and a promise to a king. The unique story of Isaac Dogboe. He defends his title on August 25 in Phoenix, Arizona and here speaks exclusively to John Dennen

ISAAC DOGBOE had faith. In his first world title challenge, in the first round he found himself on the deck with WBO super-bantamweight champion Jessie Magdaleno standing over him. It was the worst possible start.

But Dogboe had a serenity about him. He rose and started over. In the build up to his world title fight, he had been quietly confident and, even now, he was not shaken. “Once all the training is done, a week or two weeks to go, there’s nothing more you can do. All you have to is just go on your knees and pray. That’s played a huge part in my life. In the end it’s God that gives victory. That’s what I believe. I believe it’s God that comes to fight for me. So going into the ring, I had no doubts whatsoever,” he said softly.

On the canvas, enduring a count from the referee, it would have been easy to panic. But Dogboe believed. It had been predicted. In fact, victory had been predicted by his uncle. Three weeks out from the fight, before he went on to Philadelphia for the fight, he had travelled to Ghana, to his family’s hometown. Here he would fast and he would pray. But the intense training as far as he was concerned was effectively finished. This was for his mind. And even his dreams seemed to foretell victory. “We knew we were going to knock him out,” Isaac told Boxing News. “The fight was predicted. You go to sleep, people are having dreams that [say], ‘Look, Isaac has knocked this person out.’ You pray, these sort of things. You see certain signs.

“Those times you are resting, sometimes you fast and pray. You’re just there, really healing, getting closer to God, to the God you worship, your Creator. I believe that, it works for me. Other fighters they have their own things that they do. Those times are the times when you are in your own zone.”

“I have an uncle who’s a prophet,” he continued. “His name is Prophet Wogbloeho. [When] we finished up all the hard training I went to my home town just to do prayers. My uncle said to me, ‘Look it’s going to be a knockout victory.’ You just have to keep on praying.

So he got up, and fought on.

“The first round, I wasn’t expecting it in a way and I wasn’t hurt. What happened was, he threw a punch and then my leg came inside of his leg. So when I was trying to regain my balance, I lost it. I went down although the punch still connected. I got back up straightaway and I was fine. So at that time I thought to myself, damn, it’s going to be a 10-8 round. So I wanted to engage straightaway,” he recalled.

His father Paul, who has been his trainer from the start of his amateur career, issued instructions from the corner. “He [his father] is self-taught. When he was young he was around the famous place in Ghana, Bukom. That’s how he picked up the art of boxing. He developed his own boxing style,” Isaac said.

They do have their own way of doing things. Isaac moved with his father to London when he was just eight years old. Paul began to train him out in the open in Kennington Park in south London. “That’s where I used to train and a lot of people would stop and watch us training. That’s where I started boxing. That’s where he was teaching me before he took me to join a club,” he said.

“Before I enter the ring my father just says Isaac just go and have fun. It’s always great.”

Climbing off the canvas in round one of the world title fight however was not the ideal start. But Isaac noted, “Above all my father was able to calm me down, give me specific instructions. [He said,] relax, calm down, move to the side, keep moving to the side and then the next round you restart fresh. So from the next round it was more like a systematic attack, just keep on putting on the pressure. We just kept on hammering, going to the body and everything.”

Isaac’s methods are unique. On this occasion he had not warmed up intensively, not enough to actually break sweat beforehand. He’d intended to use the first round for that. “We didn’t really warm up. We knew this fight could go all the rounds,” he shrugged. “Go in there and warm up in the ring.”

Dogboe’s accuracy and timing, not to mention, power were impressive, even though their training camp too had been unusual. As a prospect Isaac had sparred everyone from Carl Frampton, Leo Santa Cruz, Oscar Escandon to even Jessie Magdaleno. When preparing for their world title fight and the biggest fight of his life, Isaac barely even sparred and didn’t even draft in sparring partners. “I don’t do much [sparring]. It’s [with] my coaches, my father, my uncle, my cousin,” Isaac revealed. “I’m not allowed to hit them hard, so they don’t get hurt. It’s me blocking and defending and learning stuff. Because they are not boxers, they are coaches. They put body armour on them so that when I hit them to the body they don’t feel it too much.”

In the fight with Magdaleno, any adjusting was done quickly, although Isaac cautioned, “I made a few mistakes during the fight where I was just too eager at times and I saw myself missing so wild. These are things I work on day in, day out.”

But his ferocity, the way he imposed his power and will on Magdaleno was essential. Dogbie said, “The fifth round came and I put him down. When I put him down I didn’t think that he was going to get back up. And he got back up and I was like, ‘Wow, this guy. Okay.’ Since then we knew it was a matter of time.” Isaac’s serenity remained intact. “I wasn’t worried,” he continued. “We knew we were going to stop him. It was just a matter of when.”

In marauding form, Isaac continued to storm after Magdaleno, now his prey. “I thought he was even going to give up. Seventh round he was really gone. For some reason he was able to survive. At the time, as the rounds were going on, I kept on feeling stronger, I kept on going. The 11th round I caught him, he went down and again my father was telling me from the corner I shouldn’t tense up too much because sometimes I find myself loading, I just want to hit him hard. Because I see that the guy wants to go,” Dogboe said. “[My father] is telling me calm down, one-twos, one-twos.

“After the first knockdown in the 11th, the second knockdown for some reason my dad was telling me the same thing and as soon as he said one-two, I just went boom-boom and that’s it. It’s over. It was great.”

It was a devastating finish. The result could not be questioned. Dogboe beat Jessie Magdaleno inside the distance, won the WBO world title and could rightly count himself to be the number one super-bantamweight  in the world.

“I just went on my knees to say Lord, thank you,” Isaac recalled. “It felt like a fulfilling moment. I’ve worked so hard over the years and finally you’ve accomplished a goal. So it felt amazing. It was an amazing feeling. Everyone was just over the moon. I don’t know how to describe it. It felt great.”

He was feted in homeland, where he had boxed in front of wild crowds before. On the night, as he celebrated his victory, he received a call from Ghana to be told gleefully, “Isaac, Ghana’s on fire!”

“Nothing worth having comes easy, that’s what I’ve learned over the years. You still have to sacrifice.”

He is a member of a royal family in Ghana and is now well supported in the country as a new, young world champion. But he has deep roots in Britain too. He grew up in the UK, went to school in London and learned to box here. He won the English amateur championships before turning professional and now, as a reigning world champion, will go to university in the UK, after his August 25 title defence against Japan’s Hidenori Otake, a former Scott Quigg opponent, in Phoenix, Arizona. He is keeping his word to his grandfather, a former king. His grandfather was shocked when Isaac went into boxing, emphasising the importance of education. That’s something Dogboe has never forgotten.

“It’s a shame he’s not around to see our accomplishment. That’s a promise we had to fulfil,” he said.

Alongside training for and competing in world title fights, he will study sociology. In the long run he plans to do something in social development. “God willing, one day. My father always said to me that boxing is in your life but using boxing as a platform to achieve something greater,” he said. “As for the education I’ve got, I believe that boxing was setting me up for one day, when I’m ready to face the next challenge, I’ll be ready to face the world.”