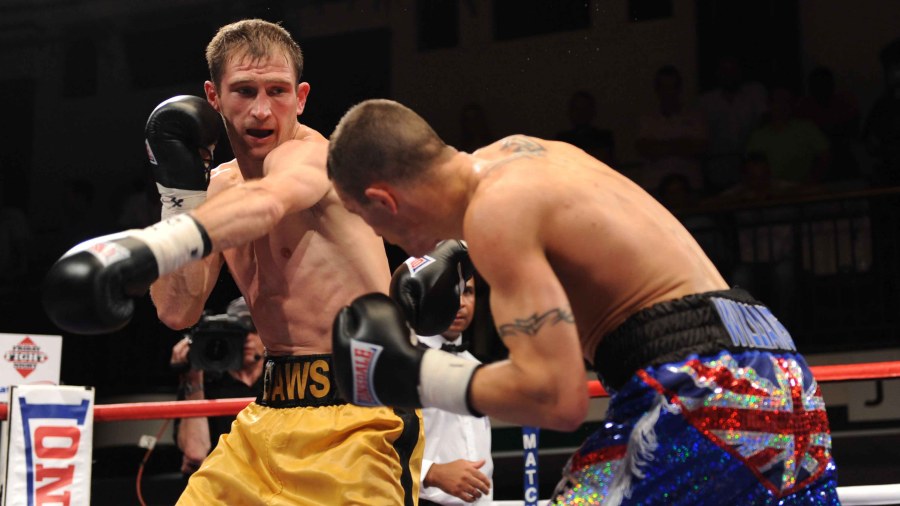 THE shots you don’t see coming are the ones that hurt that most – it’s a phrase of advice that’s as fitting inside a boxing ring as it is outside one. Just ask Lenny Daws. The 37-year-old from Morden in south west London did not fight in 2016, although he was set to make his third attempt at the European super-lightweight title against unbeaten Anthony Yigit last month.

His first two stabs at the belt ended in defeat, though to most Daws was not at fault in either instance. In 2013 Lenny and his team, spearheaded by trainer Ian Burbedge, travelled to Italy to face hometown favourite Michele Di Rocco for the vacant title. After 12 competitive rounds, Daws had been busier and landed the cleaner punches. He lost unanimously on the cards.

“We pushed him [Di Rocco] out there, it went his way,” he tells Boxing News at his old amateur club, Rosehill ABC, where he still trains. “I put him over in the last round, they ruled it as a slip but with the knockdown it would have been a draw. We pushed for the rematch, they said that they beat me easy and they let the title go.

“You look at my record, I don’t tend to get back in with people I’ve had hard fights with, they tend to stay away, they don’t want it again. You want to set the record straight. Three years ago I should’ve been European champion.”

Daws and Burbedge had been warned about how they would be treated in Italy, but neither was expecting what happened. When they arrived, they weren’t taken to the hotel they were apparently booked into but rather a block of serviced apartments with no windows. Ian stayed in that room and told Lenny to book himself into the original hotel, lying to his hosts whenever they demanded to see Lenny as proof he was staying in the dingy apartment. They claim they were only allowed to eat in one restaurant, which had loaded its food full of salt in a bid to make Daws drink more and thus struggle at the weight.

On fight night, not only were the scores dubious, but Di Rocco’s corner treated the cut he suffered in the second round with a suspicious orange substance. The EBU rules state only Vaseline and adrenaline can be used in the corner – neither of which are orange – and there is video evidence of the unidentified substance being applied to the cut. All complaints made by Daws and Burbedge were shrugged off.

For the former two-time British champion it was a bitter pill to swallow. Little did he know that he would have to get used to the taste. Last year he landed another shot at the European title, this time against Spanish warrior Ruben Nieto. With home advantage and the benefit of experience, Daws felt like this was his chance. Again, he controlled the action and was ahead on the cards after nine rounds – only for referee Freddy Rafn to disqualify him in the 10th for what he deemed an intentional head butt.

“I’m still just gutted with the way it went,” Daws says. “In theory it should have been a no-contest, I don’t know. I was ahead on all the scorecards, which is frustrating, and for the ref to stop it like that, I think he panicked a bit. It was very, very frustrating but I’ve learned from it, I’ve just got to push on now, I can’t keep thinking about it. It’s an experience I don’t want to go through again but it’s another notch on my record to say ‘I’ve been through that’.”

In his two biggest opportunities, Daws had twice been denied by officials. Forces largely out of his control had prevented him from taking his career to the next level.

“It just feels like I’m not meant to win this belt, it’s a bit of a jinx,” he muses.

“But it’s the title that makes things happen so you’ve just got to keep pushing on and get the job done. Hopefully then I can push on to big things. To win this it would be a dream come true.”

Daws’ promoter, Mick Hennessy, immediately pushed for a rematch with Nieto and terms were eventually agreed. Then, Nieto vacated the European title in pursuit of a world ranking. After a bad loss to one of his compatriots he retired from the sport altogether. Daws hasn’t fought since facing Nieto a year ago.

“I haven’t been out so it’s been hard to stay motivated,” Daws says. “Once we heard the Nieto fight was happening it lifted me again, I was training hard. Then obviously I dropped again because he gave the title up. I’m looking forward to the challenge, just need to stay switched on.”

Despite maintaining his focus, Daws now has to deal with another bump in the road. With the wind back in his sails he felt in the shape of his life; “This is the first time I feel 100 per cent.” Fate had other plans. A recent back injury to Daws forced the fight to be pushed back to February.

As Daws discusses the numerous setbacks he’s faced during his career, it’s hard to ignore the sign on the wall just behind him which reads; ‘Determination and persistence overcomes all.’ He is, despite everything thrown at him, still fiercely determined to become European champion and for all the hurdles that have been in his way through boxing, none were harder to clear than the one he faced in 2011.

Shortly before his loss to Ashley Theophane, Daws lost his nan who was very dear to him. Three weeks after the fight his pregnant wife Debbie was rushed to hospital and went into labour. She was in hospital for nine days but their daughter, Ruby, died of an infection during labour. The doctors had no warning and no explanation for what happened. Once again Lenny had to deal with a blow he never saw coming. He took six months out from boxing and returned to the ring in a bid to move on, but it was too soon. He found himself breaking down in tears halfway through a run and couldn’t focus his mind.

“That was a hard part of my life, losing my daughter. I’d lost my nan, my title and my daughter. It felt like my world was ending” he says. “I just had to step away from boxing and just forgot about it. I spent time with my family, I tried to get back into training possibly a bit too early. You’re on your own all the time in boxing, there’s a lot going on in your brain, you’re thinking all the time and there were times when I thought ‘I’m not ready yet.’

“But I knew I couldn’t pack up, I needed to push on, so I was training but I still wasn’t quite right. We got some fights and even they were a blur. It wasn’t me in there, I was just on autopilot. I wasn’t really doing what I should be doing, even trying to remember those fights it’s a blur because I was somewhere else. It has taken a lot of time to get through it. We’re back and stronger now and I use it as a driver to push me on, it’s a good thing.”

Where boxing failed to ease the pain, Daws’ family were crucial. They rallied round the fighter and helped him, his wife and his children through the most difficult time of their lives.

“It was hard for the kids, not coming home with a brother or sister, they were expecting someone to come home and trying to explain to them, they needed counselling, it was very hard. My wife, I couldn’t get anything out of her for weeks and weeks after. I’ve got such a big family, everyone was around me and if I didn’t have such a close family it would have been much harder. I’ve got to win this title for her now.”

It says a lot about Lenny – and his family – that he is able to talk so openly about the darkest chapter of his life and that he is still, at 37, unwavering in his approach to boxing. It is also remarkable how uncommonly kind and likeable he is. Life, and boxing, have not been particularly kind to Daws yet he does not feel down his luck nor does he dwell on the difficult hands he is constantly dealt. Instead, he and Ian concentrate on the task at hand. In that sense, they’re a perfect match; both down to Earth, honest, hard-working men with a real devotion to their craft. Just a few days after Dereck Chisora hurled a table at Dillian Whyte, neither man can get their head around it.

“Every fighter’s different aren’t they? I’m not like that,” Daws insists. “People say ‘you’re too quiet.’ That’s just me, I’d rather just get it done in the ring. All that shouting, I’d rather just walk away. I can’t stand all that.”

“We come in, we do what we do, and we go home. We don’t shout about it, we just crack on,” Burbedge adds.

Even with the pressures of training they are both hugely generous with their time, recounting tales from their time together long after the interview is over. Ian also openly admits that he’d have no qualms if one of his boxers wanted to avoid a certain fight – in fact they encountered such a scenario with Daws. Years ago he was offered a chance at the vacant Commonwealth title but they had to fight one of three options; two of which were Ben Tackie and Arturo Gatti. “Thanks, but no thanks,” Burbedge chuckles.

Daws acknowledges that his career could be in a different place if he made more noise, called people out and tried to generate some buzz. Indeed, sponsors have only started to come on board over the past couple of years. Plenty of people, including Hennessy, have tried to encourage Daws to tap into the pantomime side of the sport and push his name out there. But he is also aware that to act that way would be just that; an act. He wouldn’t be being himself, and that’s not a price he is ever willing to pay.