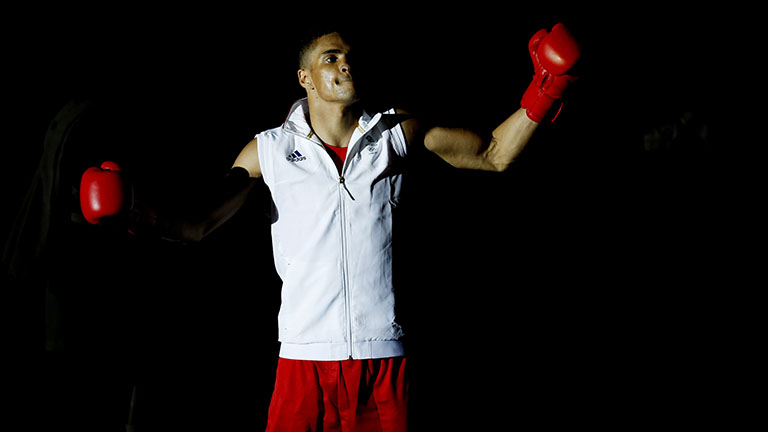 Ringside throughout the London 2012 boxing tournament, here's John Dennen's complete account of the Olympic Games that made stars of Nicola Adams, Luke Campbell and Anthony Joshua

THE obstacles that have blocked the progress of Anthony Ogogo have been many and varied. In the past the Triple A boxer has engineered crazy wins under unique circumstances, from beating Indian star Vijender Singh in Delhi without landing a scoring blow (two public warnings went in Ogogo’s favour) to Anthony’s miraculous Olympic qualification comeback. Yet he will have to face his most daunting boxing challenge in Ievgen Khytrov.

The Ukrainian middleweight is the World champion, top Olympic seed and favoured to triumph at London 2012.

“I feel like I can beat anybody. It’s going to take a momentous effort. I feel I’ve got it,” said Anthony.

Khytrov enjoyed a bye at the preliminary stage of the tournament at the ExCel while Ogogo had the Dominican Republic’s Junior Castillo to contend with. As Great Britain’s first boxer to compete at London 2012, the Lowestoft man was greeted by a wall of sound as he strode into the arena, a reception like none other in amateur boxing.

But in the first round Ogogo boxed with the burden of that pressure on his shoulders. His feet were working, cornering Castillo, but he stayed tight, tense, not letting his fists loose. Castillo, a southpaw prepared to make life awkward for him, waited for Ogogo, sweeping hooks across his guard. But the Englishman’s left hook struck hard. He flung a one-two before stepping back and, after the first round, had edged ahead.

Castillo put together more combinations, drilling his rear left hand through. Anthony’s nerve held. He looked to counter with his own cross. When that fell short, he drove his lead in. Ogogo doubled his right hand and the crowd played their part too; after the second he had an 8-3 lead.

He harnessed that momentum, lifting his arms to fire up the arena before he went out for the last round. Castillo flew straight forward, linking straight punches, Ogogo edged straight back.

He knew he had it won. But lowering his normally solid defence could have been foolish. It did, however, encourage Castillo to come in. Ogogo looped a left hook up, before slamming in the same shot once again. Junior’s own lead hook shook Anthony but he closed the bout, spinning out of his opponent’s clutches and sending the Dominican slipping to the deck. It ended 13-6 in Ogogo’s favour.

“That was better than I dreamed it was going to be,” Anthony said of the atmosphere. “It lifted me up, brought me up. Just amazing.”

On the day of this bout Anthony’s sister Leanne went into labour and the GB middleweight is now the proud uncle of a baby boy. But trauma in his family life has cast an awful perspective on his participation in the Games. His mother suffered a brain haemorrhage six weeks prior.

“She’s in hospital, still recovering but she’s doing amazingly well. I’m so proud of her. She’s given me strength to get in that ring,” said Ogogo. “If she can come from where she was to now and hopefully get better, I can win the Olympics.”

He can beat Khytrov, but it will require a momentous effort. He’ll have to match the Ukrainian’s frenetic workrate, manoeuvre him cleverly at the same time. Ogogo is the underdog for sure. But one who ought to be full of self-belief. You can count on him, through every second of the work, never to give in.

Two Irish boxers were in action on the first day, with bantamweight John Joe Nevin excelling. His movement, aggression and handspeed confounded Denmark’s Dennis Ceylan. He landed clear jabs and put spite into the right, bobbing his head clear of return fire. Ceylan clipped him with the odd shot but Nevin’s fine judgement of distance prevented anything changing the momentum. The Irishman won 21-6.

“I’m delighted with the performance, getting my country off to a winning start, I’m over the moon,” said Nevin.

“It was brilliant to walk out to such a round of applause. Probably for the first minute or so my legs were a bit shaky. When you’re winning it’s just so exciting to hear them shout every time you land a punch.

“The first round was always going to be cagey,” said Darren. “He was trying to find his distance with me, I’m trying to break him down. The second I was starting to get the distance a bit more. We started working a little bit more downstairs because he was quite tall. I’m a tall middleweight but he’s taller than me.

“Once we got a few shots in, we were able break him down a little bit more. I knew the last round was just a matter of matching him and not giving away too many silly scores.”

After beating Puerto Rico’s Enrique Collazo 18-10, Germany’s Stefan Hartel will box O’Neill in the next stage.

The US team opened their account with two excellent wins. Their 56 kgs Joseph Diaz contested the first bout of the Olympic tournament against his opposite number on Ukraine’s strong team, Pavlo Ishchenko. Diaz was a class act throughout. The American southpaw stabbed his rear left hand over. As Ishchenko offloaded heavy hooks, Diaz worked in combination, his lead uppercut shifting the Ukrainian’s head appreciably.

Ishchenko drove his right through and thumped across a left hook. But Diaz whipped in quality uppercuts with his rear left hand. Neither man was too mobile on his toes but the American hit Pavlo back in the last round, punishment starting to tell. By the end Diaz was bringing him on to his cross, showing power in close and taking it 19-9.

“He was really tough, really strong. I felt his power but I knew my conditioning is very good and I knew that I was going to get him tired and that’s what I ended up doing, picking him apart. I felt like I hurt him and like he was getting more and more tired. I just kept the pressure on him,” reflected Joseph.

“It was my speed. He probably thought I was a little slower than usual. I was picking my left hand because I knew that he was looking for my body shots. Every fight in the Olympic Games is going to be the biggest fight of my life. I just knew I had stay focused.”

On getting the tournament and the Americans off the mark he said, “Giving the whole team USA a boost now. They’re motivated even more. Everybody was already motivated because they wanted to get that medal. They’re going to be ready,” Diaz pledged.

American middleweight Terrell Gausha was up against a genuinely difficult prospect in Andranik Hakobyan, who qualified at the Worlds in Baku, where through being Armenian (and through no fault of his own, I hasten to add) Hakobyan was the most hated man in the stadium.

At once Andranik was jabbing fast, setting up a right hand. Gausha blasted the same shot back and the crowd had warmed to the contest. Long straight punches from Hakobyan kept him off but power shots from the American still bombed through.

If the Armenian needed another warning shot, Terrell dropped another right on his chin at the start of the second round. Hakobyan curled in a left hook to maintain his slender, one-point lead. The American charged him at the start of the last session, dragging Andranik into a firefight. The touches of greater accuracy were from Hakobyan, his left hook ushering in his right hand.

Gausha remained wild but his strength came through when he needed it. His right arched over, cutting a line through Andranik’s jaw, who tumbled to the canvas, his legs loose beneath him. The clock however was running down. Gausha needed to pounce. The left hook he uncorked was the shot, blasting Hakobyan off his feet. The Armenian staggered up, had his balance back with no time left on the counter. But the referee’s job is to look at the boxer’s wellbeing, not the clock. It was a good call from Mik Basi to stop the contest.

“I felt it was a close fight and it was a little bit too close for comfort, so I thought I had to go for it,” said Gausha. “I wanted to leave it all in the ring. I didn’t want to have any excuses. This is definitely a confidence booster but it is just the first fight.”

Danabek cannoned forward, chopping down a series of short shots. The Indian tied him up, before finding his range once again. He snuck in an uppercut then scraped his left hook across. In the third Singh stayed mobile, Duzhanov tracking him. Active, on his toes, Vijender launched a lead left and took the win 14-10.

“He was a good boxer so I am pleased I finally beat him,” said Singh. “I hope London is lucky for me. I got an Olympic bronze last time and hope to do better here.”

South London’s young, only 17, Isaac Dogboe came so close to becoming the heart-warming story of day one. Still at school, he took the chance to represent Ghana, making it through the African qualifier to London 2012. To emphasise his role as underdog he had Japan’s towering bantamweight Satoshi Shimizu. Yet plucky Dogboe performed, darting in and out, slinging his fists to Shimizu’s head and keeping his hands up.

He led for the first two rounds but by the last had given so much he simply had nothing left. Satoshi put it on him, nicking it 10-9.

“I could have done better,” Isaac lamented. “I’m very gutted. I’m only 17 and I hope next time I get here it’ll be different. Three years in boxing and I’m at the Olympic level.

“This is a very big achievement. It’s a very big opportunity and it’s a very big thing also to be here, to see the great fighters. I hope one day in the future I’ll be back.”