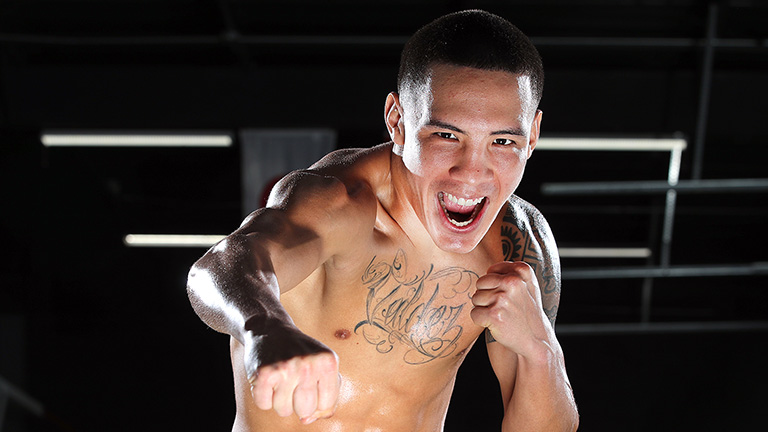 Fighting for pride, his country and his people, Oscar Valdez talks to John Dennen

OSCAR VALDEZ didn’t realise people would listen. He is a world featherweight champion, winning the WBO title in 2016 and subsequently defending the belt three times. That gives him profile and a platform. But he hardly expected to speak out for Mexicans in America.

Last year, as he ascended to new heights in his professional career, life in the USA began to change. With a new president coming into power, immigrants who had considered America home were suddenly facing a new kind of threat.

“It’s different when you see these things on TV, you say it’s a sad situation but when it affects your loved ones, your family members who are very close to you, that’s where it really gets sad because you get to know these great people, like my family members, they’re getting deported. It might not sound like a bad thing because they’re Mexican. But it really is. Because they’ve got all their doctors and their daily routine and their work in this great country of the United States and getting deported to Mexico, it might not sound that bad but they won’t get the same opportunities as they would get in the United States. It’s very frightening, very frightening for a lot of family members, a lot friends. What can we say? It’s a sad moment for all of us,” he told Boxing News.

“I’m positive if anyone would get the chance to meet my grandfather they would know he’s a great guy, he has nothing but love towards his family and towards his people. The way that the President of the United States describes Mexicans as rapists and bad people, that’s not the case. You can’t judge a whole race or a whole country and call them rapists and criminals and things like the President said.”

Addressing the turbulent politics of his time is an uncomfortable place for a boxer, even if he is a world champion. “There were things that I didn’t have the confidence to say because you don’t know what the reaction might be. I’ll be honest, I didn’t really know I had that kind of voice, that I could speak out. It all came from a simple question and I answered it and people started hearing, hearing my story, of my grandpa and my uncles. If it’s the case that my voice and my words can be spread out, if it can help them in some way then I’m going to speak out. I’ll speak out and whatever I can do to help immigrants or immigrant people I will definitely do it,” Valdez said.

“I would understand it if they were criminals, like they describe it. I would understand that because that should not be accepted any place. If you get to hear these people, like the DACA programme [a path to citizenship for those who were brought to American as undocumented children], these are people that came here to this country to do good things, even help the United States. Why would you do something negative towards people that have nothing but positive thoughts and to help a great country like the United States? So those type of things we’re questioning, like I said, if there’s any way to help I will definitely do it.”

Valdez has developed as a person over the years of his professional career, as well as blossoming as a fighter. He grew up in Arizona and Mexico. Now he trains with Manny Robles in California and between fights he returns to Sonora, to spend time with family and tend to his animals, including an increasingly large alligator called Steve. He was Mexico’s only amateur to go to two editions of the Olympic Games. He took immense pride boxing in the Mexican vest. When he was only 17 years old he qualified for Beijing 2008. At London 2012 he just missed out on a medal, losing to John Joe Nevin in the quarter-final.

It was enough however to catch the eye of promotional powerhouse Top Rank. Valdez is fast becoming one of their marquis names.

“He’s always had a very telegenic style and he loves to exchange and he loves to put everything into every punch,” Todd DeBoef, Top Rank president, told Boxing News. “We followed him through his amateur career knowing that he obviously came from a country that has a very rich, rich history of boxing, representing Mexico, of which we’ve had a very strong position in and we believed he had certain skillsets to take him to the next level.”

DeBoef was not surprised to see this rising political awareness in the boxer. “I think this is just relatively characteristic to the time and the day. I think everything has become politicised. We have the NFL, people are taking a knee during the national anthem, which has become very politicised,” Todd said. “I think boxing is nationalised where it represents, very similar to soccer, national pride. You represent your colours.

“If it was Chavez representing Mexico or Pacquiao representing the Philippines, there’s this nationalistic pride that is associated with boxing, that’s very similar to soccer. The difference is that in boxing it’s one athlete, it’s not a team. So the athlete represents a country.

“The world is going through some tense moments across the board,” he continued.

“People are being very vocal about how their feelings are and what they believe in. And I believe that Oscar has been that way from the beginning and I support him in his right to free speech and his right to express himself. I think it’s wonderful. I think that his mission, to move himself and to move awareness forward, is a wonderful cause. Because sometimes people don’t give back. They just take, take, take and for him to want to give back is a wonderful attribute.”

Now Valdez is establishing himself as a champion, fighting on broadcast giant ESPN in the USA with over 700,000 watching his main event against Genesis Servania. His next task is nail down contests with the highest profile opposition available. DeBoef says, “I’d like to do a homecoming fight, meaning a fight in Mexico with him. That would be a wonderful priority for us. We’re working on that now and then see where he wants to go with regard to targeting certain fights in the future,” he explained.

The first big name that springs to Oscar’s mind is Northern Ireland’s Carl Frampton. Straight off Valdez says, “I would like to fight Carl Frampton. Carl Frampton, they’ve been mentioning him a lot. I like him, he’s a great fighter, I’ve nothing but respect for him because of the great job he’s done as a professional. He’s done great fights. Obviously why not make a fight with him. I think the crowd would like that, he has a fan-pleasing style. I would like to put on a good fight for the belt.”

The natural step is for him to look to unify world titles in 2018. Valdez said, “I want prove to the world that I am the best featherweight. I don’t want to just fight a Genesis Servania or Miguel Marriaga.

“These fighters are very tough [but] the world doesn’t recognise these tough fighters. I want to make clear that I’m the best at 126lbs. There’s a lot of questions about who is because you’ve got Gary Russell, you’ve fighters like Leo Santa Cruz or Lee Selby. They’re great fighters but there can only be one champion and I want to prove to the world that I’m the best 126lbs.”

“It’s nothing personal towards none of these fighters, it’s just I want to prove I’m the best.”