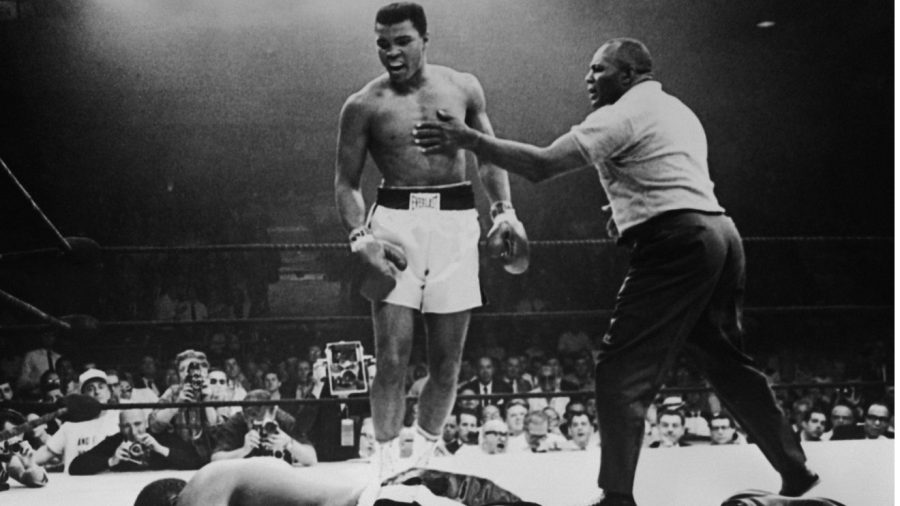 Alan Hubbard, who travelled the world with him, remembers the life, times and legacy of The Greatest, Muhammad Ali

FORTY-SIX years ago, on Monday March 8 1971, I was in the gents at Madison Square Garden when a man in a trilby standing next to me at the urinal turned his head and nodded: ”Howya doing pal?”

The stranger in the night with whom I was exchanging glances was Frank Sinatra.

“Fine thanks Mr Sinatra,” I gulped.

“Who d’ya fancy?” he enquired.

End of conversation. We returned to the press seats – Sinatra was accredited as a photographer for Life Magazine and I was a humble young scribbler covering the Fight of a Lifetime for a group of provincial newspapers: Muhammad Ali v Joe Frazier 1, for the then-richest-ever heavyweight championship of the world.

Sinatra was right about the result. Well, almost. The old warbler actually detested Ali because of his stand over Vietnam and also perhaps because here was someone at least as big as him in terms of global recognition.

But Ali, though well beaten by Frazier, was far from destroyed, as his career subsequently demonstrated. He was floored, outfought and his jaw was shattered. But both he and “Smokin” Joe lived to fight another day – and how!

New York, New York… that was some night. The Fight of a Lifetime was The Thrill of a Lifetime for a youngster like me chronicling one of the most momentous happenings in the annals of sport.

The report I telexed back to my newspapers immediately after the fight began: “A legend has been licked. The man who mesmerised the world with his mouthy magic is no longer ‘The Greatest’…”

Sadly, Ali is no longer, but he is, and always will be the Greatest.

Perhaps not the greatest boxer – Ali himself always acknowledged that Sugar Ray Robinson held that title – but certainly the greatest world heavyweight champion, and, as every opinion poll has ever indicated, the greatest sports figure in history.

Even when the dancing years ebbed away and the famous shuffle became no longer a dazzling quickstep but a distressingly slow wobble, he remained until his death at 74 the most recognisable human being on earth, and arguably the best-loved.

And all who loved the face that launched a thousand quips dreaded the day when we would wake up to the three words we never wanted to hear or read: Muhammad Ali Dies.

Subsequently few personalities few in history – and certainly none in sport – have been accorded the endless, massive tributes that continue to cascade around the world.

What particularly astonishes me is that so many come from those who never saw him fight; tweeting teenagers who label him their icon – a word which could have been invented for him.

I was fortunate enough to travel the world with the phenomenon who so ennobled his art that his role as the heavyweight champion has become impossible to follow. Yes, there have been those who have worn the crown, or tawdry, fragmented versions of it, since but none with such style, such guile, such skill and such charisma.

It is one of life’s ironies that the greatest orator sport has known, the street poet of pugilism, was in his later years reduced to a shambling shadow of his erstwhile self because of Parkinson’s Syndrome, the nerve-paralysing condition inherited from his painter father that was probably precipitated by having 10 fights too many. Alas, he never was the retiring sort.

Certainly Ali was no saint. He had his dark side, particularly in his the early days of conversion to the Black Muslims. His refusal to be drafted for the Vietnam War led to a five-year prison sentence which he successfully appealed but only after being exiled for three years from boxing at the peak of his career.

But for a fighting man there was an absence of malice outside the ring and throughout his illness he never had an ounce of self-pity, and he remained as generous with his time as he was, in his heyday, with his money. He was strong, but never militant in his Islamic beliefs, and was the first in sport of his faith to put his head above the parapet and condemn Islamist extremists in no uncertain terms, insisting his religion was one of love, not hate.

The charisma remained undimmed, despite the toll that Parkinson’s and those last few fateful punches took. In recent years it was not so much shaking the hand of Ali that brought a lump to the throat, but the shaking hand of Ali. Those of us privileged to have shared time with him, covering his fights from Atlanta to Zaire, Madison Square Garden to Manila, London to Las Vegas, could never countenanced such tragedy would engulf him because of who he was, what he had achieved and the prospect of what he might have become.

Never has a face been more photographed. Ali was not only the snapper’s delight, he was the scribe’s dream. No interview was ever spurned, no agent barred the path, no fee was ever demanded. Being a sportswriter in the Ali era was bliss. Media groupies we may have been, but we were never short of a storyline. Those were the days when we, too, were kings.

Once, back in the 70s, on arriving to interview him in Dublin before he was due to fight Al “Blue” Lewis, we discovered that Ali was flu-stricken and being attended by a doctor in his hotel bedroom. We explained to trainer Angelo Dundee that we had hoped to talk to Ali for 10 minutes.  “No chance,” came the reply. “He never talks to anyone for less than an hour. Go on up.” We emerged a good two hours later with notebooks overflowing.

“Ahm sooooo pretty,” he would say, patting the features that captivated the world. And he was, transcending boxing almost from the moment he won the Olympic light-heavyweight title in Rome in 1960 with a fleet-footed, backward leaning technique that defied all the sacred norms of the sport. The “Louisville Lip” was floating like a butterfly and stinging like a bee well before another of his acolytes, Drew “Bundini” Brown, coined the most famous phrase in sport.

Ali lived for the limelight, soaking up the adoration of the fans and celebrities which fuelled his very existence, whether Rumbling in the Jungle or Thrilling in Manila.

Ali reigned in an age when world boxing crowns were not bits of bling. He fought, and beat, everyone of note as well as many others of little consequence. No challenge was shirked, though some proved more difficult than others. He was knocked down, but got up – as he famously did as Cassius Clay against Henry Cooper. And he always stood up to be counted.

He changed the dynamics of boxing and of society in America, fighting for civil rights and landing some uncivil lefts.

If there is one enduring memory of his effect on the young, it was the morning after the fight before in Zaire. The very moment he sent rope-a-doped George Foreman corkscrewing to the canvas an electric storm had engulfed the President Mobutu Stadium that was literally set in the jungle.

Driving back to Kinshasa with colleagues Colin Hart, Reg Gutteridge and Peter Moss, the muddy roads had become rivulets, with hundreds of kids dancing in the streams and splashing water over us as they joyously did the Ali shuffle.

“Ali bomba-ye, Ali bomba-ye” they chanted, still mesmerised by his magic as we, and Foreman, had been a couple of hours before.

In more than half a century of sports writing I confess the only time I shed a tear was on the night of October 2 1980, when in a stadium built in the car park of Caesars Palace in Las Vegas, Ali, old and clearly unwell, was battered to defeat by Holmes. It was an awful night. Ali was a shell of his former self. He had nothing left except his pride. Like the urgently beckoning Holmes himself, we pleaded from ringside for the referee Richard Green to stop the fight, but it was left to Dundee to do so at the end of the 10th round. “I am the chief second and I stop the fight!” he screamed while Bundini, perhaps sensing a vanishing meal ticket, pleaded with Ali to fight on.

The lumps in our throats were as huge as the one covering Ali’s eye.

Ali fought his share of bums in his 61 fights, as most heavyweight champions do, but was always generous in victory even if he had been outrageously uncharitable in the build-up, always with an eye on the ticket sales.

But he also fought and beat the best, Foreman, of course, in the renowned Rumble in the Jungle when he regained the title for the first time at 32, but also Frazier. Their third encounter remains etched in the memory as perhaps the greatest heavyweight epic in history. “The closest thing to dying” was how Ali described it, collapsing in relief when half-blinded Frazier was retired with just one round remaining.

The one quality about Ali most overlooked was his bravery. He took more punches than he ever needed to, because he wanted to psyche out his opponents. “That your best shot, George?” he enquired of Foreman as swinging punches crunched into his ribs in Kinshasa. “You’re punching like a cissy.”

I often wonder what he might have become had he not been hit by the most devastating punch of all, Parkinson’s. An ambassador, not just for sport but for his country and world peace?

Like Manny Pacquiao and Vitali Klitchsko could he have punched his way into politics? Can you imagine him delivering those devastating verbal ko’s to Donald Trump right now, especially as Trump so conveniently rhymes with Chump?

During a career in which we applauded his sublime skills, cheered his fight for humanity and roared at his excruciating doggerel, Ali spilled millions of words. But his truest constituted a mere half dozen.

The last time we spoke was during a visit to London when he received his award as the Sports Personality of the Century. Ali always remembered your face, if not your name, and he placed a trembling hand on my shoulder as he leaned down to whisper. “It ain’t the same any more, is it?” “No champ,” I replied, “It ain’t.”

Nor can it ever be now that the Greatest really has gone. Finally, a legend has been licked in the one fight he could never win. But he’ll never, ever be forgotten.

What’s more, Mr Sinatra, he did it His Way. And then some.

Alan Hubbard covered the majority of Muhammad Ali’s fights from Atlanta to Zaire. He is a former sports editor of The Observer and latterly sports columnist and boxing correspondent for the Independent on Sunday and now a regular contributor to TV channel BoxNation.