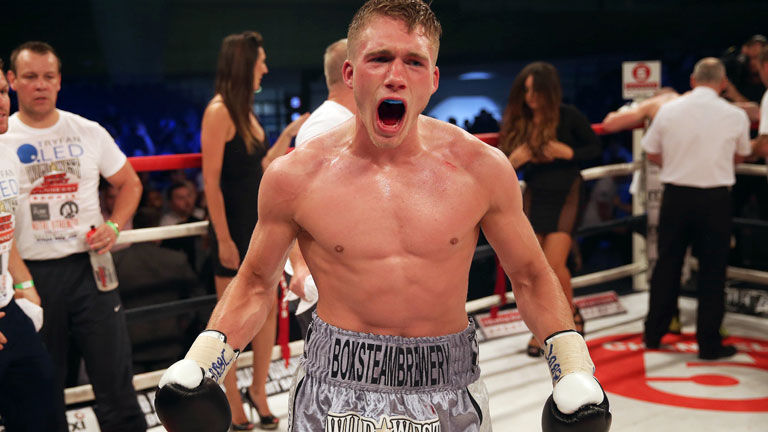 ONLY three punches were necessary. One broke the man’s eye socket, the other broke his jaw and the third broke his nose. And, like that, the damage was done. Nick Blackwell, then 17, required no further invitation to hunt his wounded prey and knock him out in the first round.

Fight over, he looked down at the man; a nutcase, a thug, two stone heavier than he was, many years older, bald, tattooed, the archetype of most fighters Blackwell encountered on the unlicensed circuit. The victor smiled. It was a mismatch he was expected to lose. Beforehand, before the cracked jaw, the damaged eye socket and bent nose, those at ringside felt sorry for him. One concerned spectator even shouted, “What are you doing? He’s only 17!”

“But I knew I was going to beat him up and I was buzzing about it,” recalled Blackwell. “It was a blood bath. It was like a bare-knuckle fight with gloves. Those watching couldn’t believe how bloody and brutal it was.”

The boyish savage who disfigured a grown man that night, sans head-guard, was the complete antithesis of the cheeky, mischievous but never naughty child who grew up in Somerset. He was physical, yes, and loved to be outdoors, but Nick Blackwell certainly didn’t appear a surefire bet for bloody and brutal combat. His father, John, and mother, Cindy, had no real affinity with fight sports, nor did siblings Sam, Dan or Hannah. But Nick was different. In love with an image, from the age of 14 he had even started to impersonate a fighter. He’d tell teachers at school he was preparing for fights at the weekend. He’d walk like a fighter, talk like a fighter. Only, at this point, the teenager had yet to even lace up a pair of boxing gloves, let alone use them.
“I’d never gone near proper boxing gloves in my life, but I always told people I was going to be a world champion,” he said. “It was something I wanted to do. I just never had the opportunity. My mum wouldn’t let me.

“When my mum and dad split up, though, my dad moved away from Bath, I moved in with my dad and he let me start boxing. It worked out quite well.”

Of course, most school kids could never get away with bending the truth in such a way. Any numbers of things would likely expose them; tears over a scraped knee, oversized spectacles, puppy fat, a flowery pencil case and so on. But Blackwell upheld the illusion with aplomb and earned his reputation on the playground.

“I always loved that feeling of having a fight on the playground,” he said. “I loved how it would make me feel. I’d be nervous but excited. And I wanted to start boxing training so that I’d be more confident when fights happened.”

At the relatively advanced age of 15, Blackwell sought evidence to back up his claims, so made his way to The Ringside Gym (now The Contender Gym) in Trowbridge, followed by younger brother Dan. Once there, he was tested immediately. It was as though the coaches at the gym had heard his bold proclamations and wanted to see him back them up.

“I got in the ring and one of the trainers said, ‘Ok, let’s see what you’ve got. Full pelt, don’t hold back.’ So I did. I punched like a maniac. Then, after about 54 seconds, I couldn’t even raise my arms. I had no energy left.

“I thought I was a fit lad because I played a lot of football, but I realised how unfit I really was after that. I was trying to throw my jab and it was pathetic. It was like I was trying to slap someone, not punch someone.”

One day, when trainer Mark Kent rounded the troops after a session, and informed all that there was a fight night coming up, Blackwell, keen to finally box, was greeted only with a laugh and a patronising shake of the head. He was then told, politely, that he was not far off awful and that he’d need to be in the gym at least three times a week to make the necessary improvements to one day box – properly box.

“I was there every single day after that,” he said. “I hung around and did the junior class, the women’s class and the adult class. I was training like a pro.”

It wasn’t long before Mark acquiesced and allowed Nick to finally do what he’d been telling others he’d been doing for months. He had his first fight. “My opponent was half a stone heavier than me and I knocked him out in the first round,” said Blackwell. “They then offered me another fight – same night – and I said I’d take it. They gave me someone who was again heavier than me, had tattoos and was an army lad. I thought, yeah, I’ll fight him, and, because I was a lot fitter, I was able to knock him out as well. So I had two fights on my first night of fighting.”

Better still, these were fights in the truest sense of the word; no head-guards, 10oz gloves, watched by the type of crowd that craved blood rather than beautiful back-hands. Blackwell was a little boy in a man’s world.

“People were saying to me, ‘Nick, you need to start coming to our amateur gym.’ But I didn’t know any better.

“I would have boxed as an amateur if I’d known what it would lead to, but I never knew what it was. I thought I was doing the right thing. I thought that was the only way.

“I wouldn’t change it, though. I did it the hard way and learned a lot. I could have been an amateur and been absolutely useless.

“Also, some of these amateur lads turn pro when they’re in their mid-twenties and they’re still a work in progress. They’re still not used to having proper fights. Thankfully, I’m not like that.”

Blackwell decided to stay unlicensed and had 18 fights in total. He was paid £150 for one of them. “I thought I was minted,” he recalled. “I was only 17. I was loving it.”

Unsurprisingly, as soon as he turned 18, Blackwell had his mind set on turning professional. Cash aside, he wanted longer, more gruelling fights. He wanted more blood on his hands. He wanted to break more bones. What he certainly didn’t want were any more college lessons or lectures from teachers.

“I went to college to become a bricklayer but I hated it,” he said. “I just wanted to be in the gym. One day my dad got a letter that said, ‘Your son has been absent from college 79 per cent of the time.’ They said I needed to go because the boxing thing wouldn’t work out and that bricklaying would be my bread and butter, something to fall back on. They said I wouldn’t earn any money from boxing and needed something else. I didn’t listen to any of them, though.”

“After losing to Martin Murray (his first pro loss) in 2011, I got really depressed and down,” he said. “I thought I’d never lose.

“I got paid something like £12,500 and it was my biggest payday, but I spent it all very quickly and was then on a massive downer. I didn’t think I was good enough to be a boxer. I thought I’d have to get a normal job.

“Now I have a low and just think, okay, that’s boxing. You have to get through it. I’m just glad I kept at it and kept working hard. Every time I lost a fight or had a setback, I’d come back and train harder. It motivated me more.”

Last year was a breakout one for Blackwell and few have been surprised by it. After all, the gym stories are legendary; they say he’s often given well-known domestic and world champions hell behind closed doors. Moreover, close losses to Billy Joe Saunders and Max Bursak hinted he was there or thereabouts. He just needed some fine-tuning, some tweaking.

Now, in winning and defending the British middleweight title, the 24-year-old appears to have smoothed rough edges. His stoppage win over John Ryder in May, when rallying back from a sluggish start, was a mark of his relentless pace and fitness, while a one-punch, highlight reel knockout of Damon Jones in July demonstrated both punch-power and a merciless streak that harkened back to his unlicensed days.

“I think it’s just down to improved technique,” said Blackwell, currently trained by former world middleweight title challenger Gary Lockett. “I never, ever thought I was a banger, but, after two fights, I’ve got people saying I’m a big puncher. It’s weird. They used to just say I was a tough, strong lad, but now they say I’m a banger.”

Stories like Blackwell’s need to be told, for they offer encouragement to the everyman, the blue collar grafter, the ones overlooked. He never had an Olympic medal or a television contract or a sponsorship deal or a celebrity trainer or a fashionable promoter upon turning pro.

Instead, a ‘have gloves, will travel’ mentality was about the best thing going for him, and even that pushed him perilously close to slipping down the journeyman route. “If I didn’t get the opportunity Mick [Hennessy, promoter] has given me, I could have ended up as a journeyman,” he conceded. “I never had an opportunity before that. I was always either an opponent or a sparring partner.”

Shortly after winning the British title against Ryder, the new champion strolled proudly through Trowbridge and parked himself down in a coffee shop. It was then that he spotted a familiar face.

“I’m so glad you didn’t listen to me back then and just went ahead and proved me wrong,” said the college teacher.

“I’d seen you lose a couple of fights along the way and assumed you’d give up like most people would.”

Blackwell smiled, then bought the teacher a coffee.