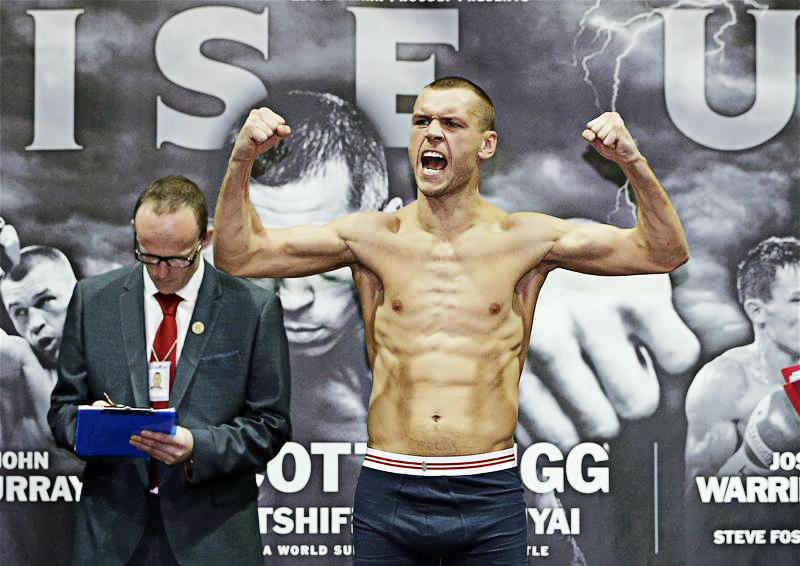 John Murray talks to George Gigney about his career, a perceived brush with death, and his new passion

WHEN asked what achievement from his thrilling career he is most proud of, John Murray needed a bit of time to think. Having won British and European lightweight titles, and boxed for the world title at Madison Square Garden, there were plenty of highs during his 11-year career.

“Winning the Lonsdale Belt outright. I think it was my fight against Gary Buckland, which was a hell
of a scrap. I was dead chuffed with that,” he told Boxing News after some deliberation.

Murray stopped Buckland in 11 enthralling rounds in 2010 to win the British belt for keeps and also claim the vacant European title.

Four years and three defeats later, Murray was forced to retire due to a severe injury to his right eye. The injury came after Murray’s gallant 10th-round stoppage loss to former gym-mate and close friend Anthony Crolla in April 2014, and was so severe that “The Machine” had to hang up his gloves for good.

“Nothing ever lasts forever and I had a really good career and when I retired a lot of people told me that they loved my fights, there’s a lot of positives to take from that,” he said.

“Even in the prime of my career, I was always worried about what I’d do after boxing. I had no guidance.

“I was always very realistic, I knew that once I retired I’d be in my thirties and like a school leaver with no qualifications, nothing to fall back on. That was a constant worry at the back of my mind. I’m glad to say I’ve found something I enjoy doing.”

Upon retiring, Murray was able to use his earnings from the Crolla fight to open his own gym in Reddish where he trains both amateur and professional fighters. He currently has three budding prospects – including his brother, Joe – under his wing and several more ready to turn over into the paid ranks.

“I’ve got kid classes, start them at four, five years old and it goes up all the way to professional boxing.

“I’m happy with the set-up, the gym’s thriving and I do every class. It’s not a job, I’ve found where I’m supposed to be in life.

“How far it’s come in 12 months is unbelievable, I’m excited to see how it will go in another 12 months. I’m chuffed with myself [laughs], it’s a good feeling. There’s no better feeling than helping someone out, working with the kids and seeing them come on. Plus it’s a business so I’m getting by alright.

“Obviously it was a bit of a worrying time when I retired, but I knew what I had to do. I’m very good when I set my mind to something, when I do that, I’ll go and get it done. I’m a proper grafter, I work hard, You get out what you put in, don’t you? I knew I wanted my own gym and I’ve worked my a*** off.”

For many boxers, retirement is a reality they cannot come to terms with, and the unquenchable inner fire which drove them through their careers forces them back into the ring.

Ricky Hatton – one of John’s heroes – returned after a three-year hiatus and a battle with depression only to find out his body could no longer keep up with this most brutal of sports. Frank Bruno, himself a sufferer of mental health issues, recently expressed his desire to fight again at the age 54, although has since admitted he could not.

Ultimately, boxing – John’s only source of income – retired him, rather than the other way round. The British Boxing Board of Control would never license the Manchester hero with the state his eye is in – he admits he can barely see out of it – but he maintains that the turn of events was good for him.

“There’s no doubt in my mind, I’d 100 per cent still be fighting if I could be. I’m known for liking a tear-up, I thoroughly enjoyed having a good scrap, even when I was losing against Crolla and [Kevin] Mitchell, I loved being in there. I lost those fights and if you’d have asked me the day after if I wanted to do it again, I’d have said ‘yes.’

“The eye’s made it impossible for me to fight and it’s probably a blessing in disguise, it’s given me a new focus in life.”

Murray giggled like a schoolboy when he recounted blacking out after a six-round decision win over Johnny Walker in Florida in 2005 – “the adrenaline just went to my head, Winky Wright was ringside shouting, ‘Go on Murray!’” – and almost lost himself as he reminisced about fond memories in his career.

Those were the good times. The dark times are harder for John to recall.

In July 2011, Murray suffered his first professional defeat, an eighth-round stoppage against Mitchell. With his earnings, Murray achieved a lifelong ambition by buying a house with his then-partner, before spending tens of thousands of pounds renovating it.

He then boxed an unbeaten – and overweight – Brandon Rios for the vacant WBA lightweight title at Madison Square Garden in New York, but was stopped in the 11th.

When he returned home that December, his life outside the ring took a devastating turn.

“I always said I wanted a house out of boxing. I was with my ex-girlfriend at the time, we had been together for four or five years and went to school together,” he explained.

“You think you can trust someone. I put all my money into this house, in her name. I spent six months after the Mitchell fight doing it up and we spent another £20,000 doing it up.

“Then I lost to Rios, that was on the second of December and my birthday was on the 20th. I went home for my birthday and she just said, ‘That’s it, it’s over.’ So she broke up with me and took the house.”

Murray, already veering off the rails after back-to-back defeats, swerved completely off them.

He went on what he describes as a “six-month bender” and found himself on the brink.

“I was at a low point in my life, I was dead, dead depressed. I’d lost two fights on the trot, I’d lost my house. All that money I’d worked toward in my career, I’d lost that. I self-destructed a bit.”

Somehow, he dragged himself back from the precipice and went back to the gym. His reward was a fight with British and European champion Gavin Rees, who was highly ranked by the WBA.

It was a significant fight, one he was confident of winning and a victory would throw him right back into the mix. He toiled away in the gym and whipped himself into the shape of his life, only for fate to once again deal him a hellish hand.

“I got it together, I got it right and I got the Gavin Rees fight. I’d really had a good training camp and then a week before, I got the phone call. That was a really, really low point. That could have killed most people, most people don’t recover from that.”

That phone call came from the Board of Control, who informed Murray he had failed a brain scan. He thought he had a brain tumour.

“I thought I was going to die at one point. The Board, after a scan, rang me and told me to go and see the doctor, and I said, ‘Am I going to die?’ and they said, ‘We can’t tell you over the phone, you have to go to the doctors.’ I thought, ‘F***ing hell I’m gonna die.’”

“I had just done my last spar and I was feeling red hot. It was a week before the fight and I’d failed the brain scan, so the fight was off. After the call I was in bits driving home. I rang the doctors right away and it turned out it was nothing important. I had to go for more brain scans and it kept me out for a year. The specialist in the hospital thinks it was misread. It kept me out while I was probably in the best shape of my career. It was annoying but everything happens for a reason, I’m not that beat up about it.”

While the alternative does not bear thinking about, the misdiagnosis – coupled with his own dance with the devil – robbed Murray of two years of action. The hiatus was a struggle and saw Murray digging up roads for a spell to earn money, but his circumstances convinced him to fight on once he had the all clear.

Issues with his eyes had already begun, some nerve damage after the Mitchell loss gave him minor double vision, but the need to earn some money the only way he knew how was too much.

“You get to the point where you’ve got to keep fighting otherwise you’re bankrupt,” he admitted.

“It got to the stage with me where I had to keep fighting because I had no options, I needed to set myself up. Otherwise I would have retired after the Rios fight, but I had a bad run of events outside of boxing. I had to go back and fight again. I had to keep going.

He boxed three times when he returned, with two routine stoppage wins setting up a big Manchester derby with Crolla. He may have lost, but the exciting fight added to his legacy as a fan-favourite. It was a fitting, albeit cruel, way for Murray to go out. More importantly, it allowed him to open his gym.

“I’m happy about what I did as a boxer. I came back and had another go, got myself set up. I’ve got my missus, my babies and I’ve got a little son due in May. I’m in a dead good place.

“I think this is the happiest I’ve ever been in life.”

The British and European titles are prestigious awards, but it seems clear Murray is currently revelling in his greatest achievement – battling adversity to find some lasting, palpable happiness.