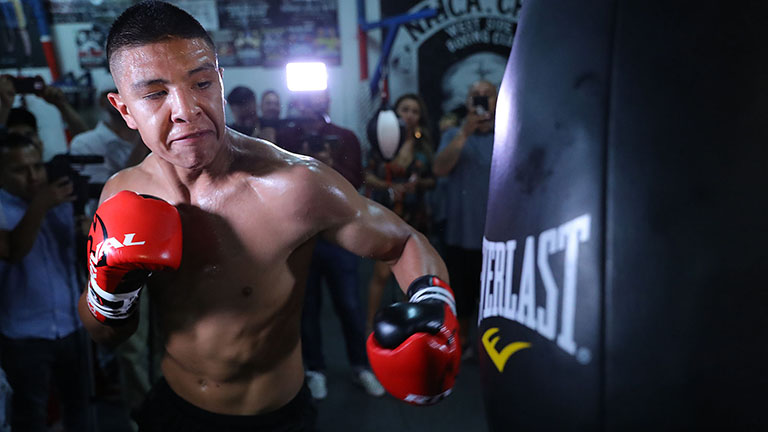 Declan Warrington considers whether Jaime Munguia is the anti-Canelo Alvarez

IF what appear insignificant occurrences dramatically shape the boxing landscape as often as they do entire lives, the Nevada State Athletic Commission’s rejection of Jaime Munguia as an opponent for Gennady Golovkin could prove similarly defining in the coming era.

The promising Mexican was considered unsuitable – overmatched against a truly fearsome middleweight – and, the NASC concluded, incapable of resisting the beating that Vanes Martirosyan that May night instead took.

An illness Liam Smith suffered then forced his withdrawal from a fight with Sadam Ali, creating a demand for a late-notice challenger for the then-WBO light-middleweight champion and ultimately a void Munguia – therefore available and perhaps saved from Golovkin as much as from himself – was permitted to fill.

What ultimately transpired was an even more devastating victory than the Kazakh had secured in anger against Martirosyan, the emergence of a new champion and, if the dismissive beat down of Ali was any indicator, Mexico’s latest potential great.

An electric storm had led to Manny Pacquiao meeting Floyd Mayweather and eventually agreeing terms for their long-overdue fight in the same way a stolen bike is often credited with the eventual emergence of the great Muhammad Ali. Interest will surround Munguia’s future as a fighter more than it will the nature of his next fight itself.

“I’m happy I didn’t get that opportunity [against Golovkin],” Munguia told Boxing News. “It was better [I didn’t] because my career’s also better right now. Of course, I’d have done a much better job than Martirosyan; I would have gone in there with the mentality to win, the mentality to throw punches.

“I know for a fact that I was going to do a lot better than him, but thank God it didn’t happen, because I won a world title and now I’ll be defending it.

“I really like the work – I like doing it. I really enjoy the sport. The fact is I can raise the living standard of my mother and my father; I can really elevate them through this sport, and I just want to show everybody what I’m capable of. That’s where all of this hunger comes from.

“[The unexpected and sudden success] is really nice, something that I really like, but something I’m not happy with yet. I obviously want to go even further.

“I like the exposure, I like all of this, but I still have a lot to do – and I still want to complete a lot of my goals.”

The son of a Tijuanan journeyman heavyweight who also goes by the name Jaime, the 22-year-old Munguia was first taken to the city’s Cheto’s Boxing Club at an age where he would barely have started school.

A strong amateur grounding gradually followed but a naturally-aggressive style ensured the temptation posed by the Olympics was resisted in favour of the professional ranks and, therefore, until earlier this year, limited recognition of his likely emergence from Saul Alvarez’s shadow.

Mexico’s – and perhaps the world’s – highest-profile fighter may often be recognised as the irrepressible alpha male who defeated grown men in his teens. Yet in his being fast-tracked and groomed for greatness by Golden Boy it is Munguia – the home-town boy who has forced his way to Las Vegas – who has instead become the archetypal blue-collar fighter, almost the anti-Alvarez.

“I started boxing very young, almost right at the beginning,” he said, via translator Gabriel Rivas. “When I was very young he took me to the gym and that’s when I started boxing. I must have been five or six the first time.

“I never actually got to see my dad fight; by the time I could remember things he had already retired. The first gym I went to was called Club Cheto’s, the first boxing gym Tijuana ever had.

“I didn’t come from a very luxurious background – [typically for Tijuana] it’s not a family with a lot of money. What happened is that my mum and dad worked really hard all the time. I didn’t experience a lack of food or a lack of clothing or anything like that; my parents worked really hard.

“My mother owned a grocery store in Tijuana, and my father was a seller, selling different things – including selling cars.

“From 14 or so, I liked to help my dad sell stuff, or sell cars; I’d help my mother in her grocery store; sometimes I’d help my aunts and uncles.

“I spent my entire upbringing in Tijuana. My dad just used to bring me in [to the ring] when I was just one year old. I don’t know if you can call it being nervous or being scared, but that’s what I had at the very beginning. Little by little that started going away, and I realised that I really liked it.

“A very good trainer I had, Alvarez Tostado, realised I could really hit hard, that I had a lot of talent in the gym.

“I had a long amateur background, I had maybe 130 fights, and because of my amateur background I was able to travel a lot in Mexico. I went everywhere – Cancun, Guadalajara, Mexicali – everywhere in Mexico and I even travelled to Cuba; when you compare yourself to the poverty over there, you feel rich.

“I never went to the Olympics because I didn’t want to do it. I did win some national titles in Mexico; in 2012 I won gold, in 2013 I won bronze, then afterwards I wanted to start my professional career.”

Oscar de la Hoya, Alvarez’s promoter, has been as vocal about his confidence in Munguia’s talents as the fighter has about his ambition of one day facing his greatest asset.

If the last Tijuanan to truly establish himself was the similarly working-class Antonio Margarito, if advice offered since childhood by the “inspirational” Julio Cesar Chavez proves wise and if Alvarez’s reputation remains damaged by perceptions he was first avoiding Golovkin and then gifted a draw when they fought 10 months ago, Munguia’s sense of timing could continue to prove his greatest strength.

Alvarez’s positive test for clenbuterol and the injustice felt at his subsequent, ineffectual ban further damaged a reputation that had grown when Juan Manuel Marquez joined Erik Morales and Marco Antonio Barrera in retirement.

It was the Morales-Barrera rivalry that secured their legacies in Mexico in the same way Marquez’s popularity grew when – so far similarly to Golovkin amid Alvarez’s influence – he was seen to have suffered unfairly against Pacquiao, and victory on Saturday would take Munguia closer to what would represent the perfect storm the NSAC so recently continued to grow.

Regardless of the outcome of September’s rematch the 27-year-old Alvarez will eventually require a new rival and Munguia – destined for the middleweight division – has recognised that from afar.

“I would like to fight with ‘Canelo’ or Golovkin,” Munguia, surprisingly the only fighter in his family, said. “Next year, I’ll go to 160lbs. I have the stature and size – it would be a dream fight. A fight between Mexicans is attractive, steals spotlights.

“I want to be the next Mexican idol, like Julio Cesar Chavez; I see myself like this in a few years.

“I’ve known Julio Cesar Chavez since I was kid in the amateurs. Julio Cesar Chavez knew me, and it’s a relationship where he gives me a lot of advice. I never really got to see him fight because that’s before my time, but it’s definitely an inspiration.”

The great future Munguia is envisaging and that so many are also suddenly predicting could yet be threatened with the champion fighting under intense scrutiny and pressure.

In Mexico he has largely and appropriately been guided by the less-known Zanfer Promotions, and who so recently led him to De La Hoya’s former trainer, the South California-based and respected Robert Alcazar.

“I started from zero, just like everybody else, I didn’t start with an established name, because my father didn’t really dedicate himself to the sport 100 per cent,” Munguai tells BN. “He always worked, and stuff like that, so he never really became a big name, so it really didn’t have an effect on my career.

“I don’t really know why so many good fighters come from here [Tijuana] but it seems a long time since there’s been one.