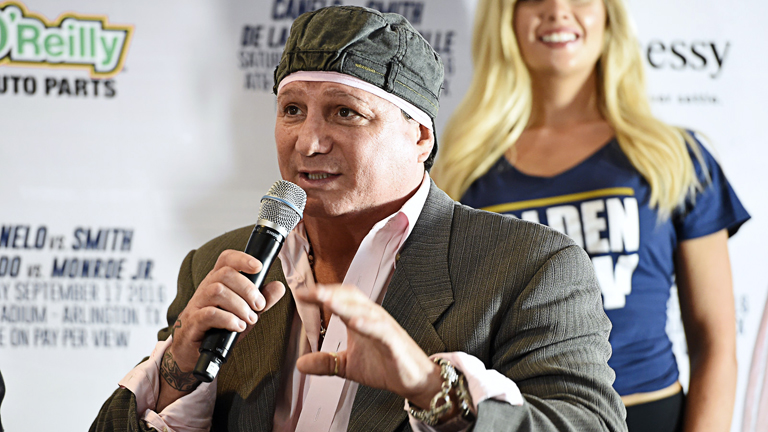 The subject of Bleed For This, former two-weight king Vinny Paz – formerly Pazienza, sorts the facts out from the fiction, writes Thomas Gerbasi

“That’s awesome,” he said. “That’s one of the greatest comments ever. And it’s very true.”

The context for this exchange was a discussion of Pazienza’s first fight with Dana Rosenblatt in August 1996.

Bitter rivals from the New England area of the United States, Rhode Island’s Pazienza and Massachusetts’ Rosenblatt were polar opposites – Pazienza the fiery Italian veteran and Rosenblatt the clean-cut Jewish kid with the glossy unbeaten record. And when they met in Atlantic City, the pre-fight animosity carried into the ring.

Pazienza was dropped in the first, but before referee Tony Orlando could intervene, “The Pazmanian Devil” jumped to his feet and cracked Rosenblatt. Regardless, Rosenblatt dominated the first three frames, before a right hand from Pazienza decked him. Rosenblatt rose, staggered back to the ropes, but was allowed to continue. Pazienza, smelling blood, didn’t let his foe off the hook, and even when Orlando intervened, the Cranston native kept punching, the referee falling to the canvas as well.

It was the career of Pazienza in a nutshell. Frantic, captivating, often out of control. And you couldn’t turn away.

Rosenblatt would avenge his defeat a little over three years later, winning a controversial 12-round split decision. After his career ended with a 37-1-2 record in 2002, he became a successful mortgage broker. No offence to those who are in that line of work, but Vinny Pazienza is no mortgage broker. He was, is, and always will be a fighter.

Luck had little to do with the nearly 21-year career of Pazienza, who mixed a blue-collar work ethic with crowd-pleasing flash to captivate fans around the world, while he won major world titles at lightweight and super-welterweight, as well as fringe ‘world’ titles at super-middleweight. Among his victims were the likes of Roberto Duran (twice), Lloyd Honeyghan, Greg Haugen (twice) and Harry Arroyo, and even when not on the winning side, he had no issues facing Roger Mayweather, Hector Camacho, Herol Graham and Roy Jones Jnr.

But it was something that happened out of the ring that added a new layer to an already compelling story, one that will hit the silver screen in November when the feature film, Bleed for This, is released.

As 1991 began to close, Pazienza was the owner of a 31-5 record, he was a former world lightweight champion, and on October 1, 25 years ago this week, he scored what he today calls his greatest victory.

“Gilbert Dele,” he said when asked for the fight he would put in his personal time capsule. “The fight in Providence at the Civic Center for the WBA junior-middleweight [super-welterweight] title. I was down and out, people counted me out, I came back, bam, win the world title. There was nothing like it. And then I break my neck a couple weeks later in a car accident.”

Nearly 25 years later, Pazienza speaks of that car crash, which took place a month after he stopped Dele in the 12th round for the WBA title, almost matter-of-factly. It’s almost like it was a mere blip on the radar of his life. But it was so much more than that.

Struck head-on while a passenger in a car driven by his friend, Pazienza broke two vertebrae, while a third was dislocated. There were doubts whether the then-28-year-old would walk again. Fighting? That was out of the question. To everyone but Pazienza, that is, as he never doubted that he would lace up the gloves and resume his career.

The images from that time are still striking. Pazienza, halo fastened to his head, working out and gaining the strength to fight again. Yet it was when the screws that fastened the halo to his head were removed that he knew for sure that nothing he could experience in the ring could match the pain he was about to feel.

“My doctor was like 75 years old,” Pazienza recalled. “One time when he clicked the ratchet – because it was literally a ratchet he used to get the screws out of my head – I hit him on his thigh and I went, ‘Doc, you’re going the wrong f*****g way.’ He said, ‘Vinny, I told you it was going to be painful.’”

Was the second one easier?

Stubborn to the core, Pazienza was going to fight again. There would be one more test though. He had to prove he could still take a punch.

“It was very, very intense,” he said of his first sparring session after the accident. “And it was done with a fighter who’s one of my best friends today – Ray Oliveira.”

One of New England’s most popular warriors, Oliveira was less than 20 fights into what turned into a respectable career when Pazienza asked him to spar.

“The first round, he [Oliveira] wasn’t hitting me,” Pazienza recalled. “He was hitting me with little sissy shots and I’m like, ‘Ray, you gotta hit me, man. Don’t worry. You gotta do this.’ He goes, ‘Yeah, yeah, Vinny, don’t worry.’ Second round, he’s not hitting me. I’m moving around, I’m boxing, I’m popping him and he’s hitting me like a girl. So in the third round I start opening up on him and just drilling him and hitting him with bombs. I’m banging him like crazy, so now he starts hitting me back. And at the end of the third round, we went at it, punch for punch, back and forth. And then the bell rang, and I was like, ‘YES, THAT’S IT. I’M BACK.’ That was the moment that I knew.”

On December 15, 1992, a little over 14 months after beating Dele, Pazienza returned to the ring with a decision over Luis Santana. The story could have ended right there and been Hollywood-worthy. But Pazienza continued to fight 23 more times, ending his career with a 50th win over Tocker Pudwill in 2004.

I ask him what his life would have looked like today if he listened to his doctors and never fought again.

“I probably would have went…” he said, then he stopped before continuing. “People say to me a lot of times, ‘Vinny, what would you had done if you didn’t box?’ I tell them I’m not even gonna answer that or entertain the question because there was nothing that I wanted to do since I was five f*****g years old other than box. I saw Muhammad Ali on TV, I loved him, that’s what I wanted to do for the rest of my life. And that’s what I did. So I don’t have an answer for them because I never thought about that. I never once thought I wouldn’t fight. Never once.”

It’s that attitude that endeared him to boxing fans when he fought, and his popularity hasn’t waned since his retirement. He’s no angel, with a few run-ins with the law over the years, but Vinny Paz (he legally changed his name from Pazienza) still has that special something that few fighters possess. Call it the Gatti or Mancini factor, the ability to transcend the sport and mean more than just a win-loss record. So will Pazienza follow the aforementioned action heroes into the International Boxing Hall of Fame?

“I think I deserve to be in wholeheartedly,” Pazienza said. “I fought for 20 years as a pro, I entertained millions and millions of people, I brought millions of people to boxing that would have never watched boxing. And just for that alone. But I won five different ‘world’ titles, I won 50 fights, and I fought the best of the time. When you watched me fight, I never quit. No one ever kept me down. I fought the heavyweight champion of the world (Jones) and he couldn’t keep me down. Duran couldn’t keep me down and nobody hit harder than Roberto Duran. Please believe me. No one hit harder than him.”

Life is good for Pazienza these days, with Bleed for This about to hit cinemas. Packed with Hollywood heavyweights in the form of Aaron Eckhart and Katey Sagal, as well as director and writer Ben Younger and executive producer Martin Scorcese, the star of the show is undoubtedly Miles Teller [pictured with Eckhart] , who has the full endorsement of the man he is portraying.

“The first time I talked to him on the phone, he was really nice and I could tell we’d get along easily,” Pazienza said of Teller. “He’s like my brother now. After we were talking a little while, he says, ‘Vinny, I want to hang out with you a little bit. I want to get your mannerisms down, I want to see what you do and how you talk. I want to get your accent down.’ And I went, ‘Whoa, whoa, whoa, Miles. I don’t have a f*****g accent.’ He started cracking up.”

Despite going a hundred miles an hour more often than not, Pazienza can occasionally slow down for a moment and reflect on a career well fought and a life lived to its fullest.

“It’s so crazy the things that have happened to me because of my boxing career,” he said. “Not everyone gets it, I understand that. And I totally appreciate it, love it and respect it. If there’s one word to describe it, I’d say that it’s cool.”