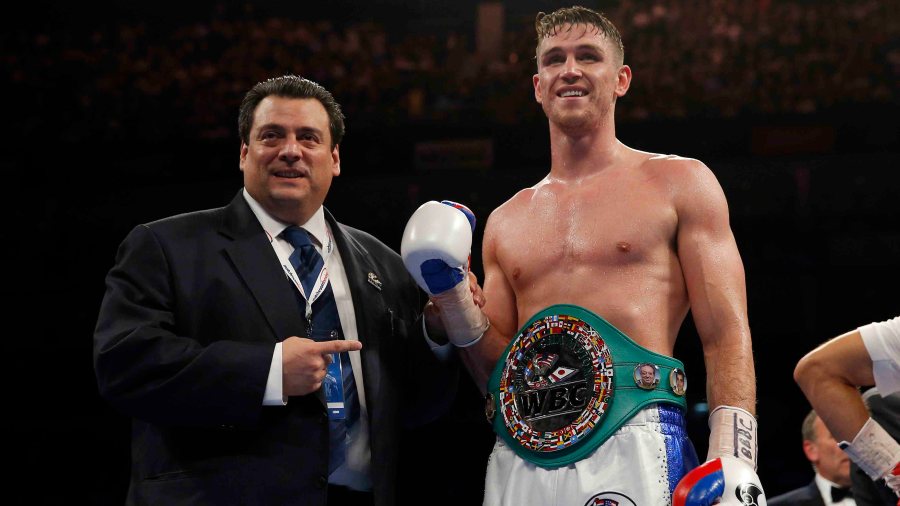 FOR one week only, the lobby at the Diplomat Resort in Hollywood, Florida – which hosts the 54th Annual WBC Convention – is like a treasure trove, with glorious tales of the unexpected at every turn. The wide open space, illuminated by the bright sunshine outside, is dotted with tables, chairs and tropical plants, and it’s where the champions gather. For the fans and media in attendance, it’s paradise as kings of the ring roam among us. And the adored fighters themselves are only too happy to be the showpieces.

After posing for his umpteenth photograph of the day, Roberto Duran – wearing a cap that says ‘Roberto Duran’, perhaps to avoid any confusion with his lookalike Del Trotter in Only Fools and Horses: Miami Twice – turns back to what he’s really interested in. It’s a pepperoni pizza with a circumference comparable to a car tyre. He grips it by the crust, scoops a slice into his mouth, and demolishes it with impressive haste while imploring those around him to get involved in the feast. The greatest lightweight of all time is, just like always, incredibly content in his own skin, and merrily feeds without appearing to have a care in the world. One man who eyes the pizza, before indicating he doesn’t want any, is the bespectacled Milton McCrory. The former WBC welterweight champion sits quietly, often appears lost in thought, and is the opposite in character to Duran. While “Hands of Stone” is fuelled by a mischievousness that’s hard to ignore, McCrory – wearing a ‘Milton McCrory’ t-shirt – is spotted on the edge of crowds, just happy to observe.

While the spectrum of personalities is a wild and varied one, they are by in large all joined by one common factor. Each and every one of them – quite rightly, it must be said – has an ego even bigger than Duran’s pizza.

“We asked to fight Duran but he turned it down,” claims McCrory, who sparred with Tommy Hearns back in the 1980s before and after the “Hitman” handed Duran his worst ever beating. “I guess after what Tommy did  to him, he didn’t want any part of me. I have no regrets about that, but what I do regret is never getting the Sugar Ray [Leonard] fight. And people forget that I was in line to fight Leonard. When he came back in 1984 and fought Kevin Howard, he was doing so because he wanted to ‘get my WBC welterweight title back’ which I had. That was supposed to be a tune-up fight for Milton McCrory. In the end it didn’t happen [Leonard retired again], but I wish it had, I would have shocked the world.”

But McCrory’s heart was never really into boxing when he was an active fighter. At least not in the same way it was for his more illustrious contemporaries. The man who Leonard eventually came back for was Marvelous Marvin Hagler, sending the then-middleweight king into a bitter retirement in 1987 following an eternally contentious decision win. Today, Hagler – who beat Duran four years before the loss to Sugar Ray – swims in the pool outside. Hagler is very much the star of the convention, and has the air of a man who knows this all too well. He talks to fans, but refuses to sign any gloves, presumably unhappy that they might simply be sold on, and make money from his great name. Nor is he keen on being interviewed, or at least his wife isn’t keen, after seeing her husband misquoted in several recent articles.

One man Hagler is pleased to see is WBC cruiserweight champion, and star of Creed, Tony Bellew who, along with his promoter Eddie Hearn, makes a flying visit to the convention and the Awards Ceremony that takes place on the Monday night.

“The greatest middleweight ever in Marvin Hagler asked me for a photo,” says Bellew, who in this setting is more fan than fighter. “I was on the verge of doing it. Someone said to me, ‘I’ve never seen Hagler do that before, ask anyone for a photo’, I didn’t know what to say. All I could do was look at him. My favourite woman in the world is Eva Mendes and how I’d look at her is how I looked at him. It does sound a bit like the wrong kind of party but that’s how I was looking at Marvin Hagler. He’s the dude, he’s the mother f****r who smashed people up. I’ve come here and it’s nuts, I’ve studied boxing since I was a kid. I spoke to my missus on the phone and I said ‘I can’t believe I’m with all of these’, and she said, ‘You’re one of those now’.”

The impressive cast that the WBC ensemble (which also includes Evander Holyfield, Julio Cesar Chavez, Jeff Fenech, Lennox Lewis, Iran Barkley, Humberto Gonzalez, Vinny Paz, Roy Jones Jnr and many more) provides fans with a once-in-a-lifetime environment, the awards ceremony delivers the end-of-year back slaps (some necessary, some cringe-tastic), but it’s in the conference rooms upstairs where the Convention’s real purposes are outlined.

Over the course of four days, following an opening ceremony that paid tribute to the memory of Muhammad Ali, President Mauricio Sulaiman – who is unanimously elected for another four years – chairs a series of meetings that are open for all attendees.

IN 2016, the WBC unveiled their ‘Clean Boxing Program’ which ruled that all champions and Top 15 contenders must be subjected to random drug testing.

Dr Margaret Goodman, who worked for the Nevada State Athletic Commission and started the Voluntary Anti-Doping Association in 2011, says: “I believe that eventually this will go beyond just anti-doping. It will lead to uniformity in brain testing, in how long a fighter should spar before a fight, or those kinds of things. It will lead into what kind of blood tests and urine tests, heart tests, and all these kinds of things, this has the potential to do.

“So far, since October when we started this program, the WBC Clean Boxing Program has tested over 23 times – some individuals were tested more than once – but a total of 23 blood and urine collections.”

A few days later, as President Mauricio Sulaiman prepares to leave the Convention and go home, he is told that Alexander Povetkin had failed one of those tests. The Russian is just hours away from taking on Bermane Stiverne for the WBC’s Interim heavyweight title. Sulaiman immediately withdraws the WBC’s sanctioning from the bout, and while some argue he nor Stiverne should have been permitted to fight in the first place (both had failed tests in 2016), their ultimate stance was the right way to end the fiasco.

However, the fact that Povetkin fights anyway – knocking out Johan Duhaupass (who just happened to be in Russia) when Stiverne refuses to enter the ring – illustrates the size of the task ahead; should the WBC hand Povetkin a lifetime ban from fighting for their title it will highlight their commitment to it.

Sulaiman requested a renewal of a rule that prohibits fathers from being the chief second in their son’s corner during a fight. “The father is more aggressive towards his son,” Mauricio explained, “and lets the fight [go] on too long [after it should have been stopped]. That’s what history shows.”

It is agreed that the father can train the son, and be second or third assistant, but will not be allowed to make the final decision in the corner. How this might impact on the likes of WBC welter boss Danny Garcia (trained by his father Angel Garcia and preparing to face Keith Thurman), Chris Eubank Jnr (handed a rating at super-middle and advised between rounds by Eubank Snr), or Floyd Mayweather (coached by Floyd Snr) should he ever return, remains to be seen.

Also up for discussion is putting a limit on the amount of rounds that are sparred before a contest, but it’s agreed that further investigation is required. Malignaggi admits the amount of sparring he takes part in varies wildly, depending on the contest, the opponent he is preparing for, and the stage of camp. However, all trainers agree that a fighter should not enter in any sparring until he is close to his fighting weight.

ONE of the biggest criticisms of the WBC over the years has been their ratings, and it is a bizarre experience to witness how they come to pass. It all begins on Tuesday morning (December 13) when the ratings committee (consisting of 20 people from all around the world) present their initial divisional rankings, and is not concluded until late the following day, when the mandatory placings are finally thrashed out.

As succinctly as possible, it goes something like this: The Top 15 is presented to the room, and it remains visible on a big screen behind the stage as debates ensue. Should anyone disagree with the placings, or feel that a fighter should enter or be removed, they (or a representative) are permitted to make their case. And, it should be said, in the majority of cases, any reasonable objections to the rankings are upheld (in several cases, the rankings are altered there and then). For example, if Fighter A can justify why they should be higher than Fighter B, Fighter A will be moved up. However, should Fighter B then decide they should have kept their ranking, they too can object. Should the committee not agree that a fighter deserves a higher placing at this point, promises are made that their progress will be monitored over the coming months (explaining why fighters will experience significant jumps after winning a fight). And it’s not just the fighters and their teams who get involved – absolutely anyone can voice their opinion, making it a truly exhaustive and largely transparent process.

However, while transparency exists, it is sometimes hard to agree with why the decisions are made. For example, at welterweight, Jessie Vargas (initially ranked No.8) and his team put it to Sulaiman that their fighter should be moved up – largely because he is a nice guy who has done a lot of work for charity. His request is granted, and he moves up to No.5.

ONE may not agree with all of the WBC’s policies but that they are striving to make the sport as safe as possible should be commended. At the Convention, everything is explained and open to all. They do go a little overboard at times with their quest for world peace (the WBC campaign to stop drivers from texting while at the wheel, for example, would perhaps be better left to someone else), but the extent of the ongoing studies and investigations they carry out are unparalleled in the boxing industry. They make some heartening promises, and should they keep them, their rival sanctioning bodies will have some serious catching up to do.