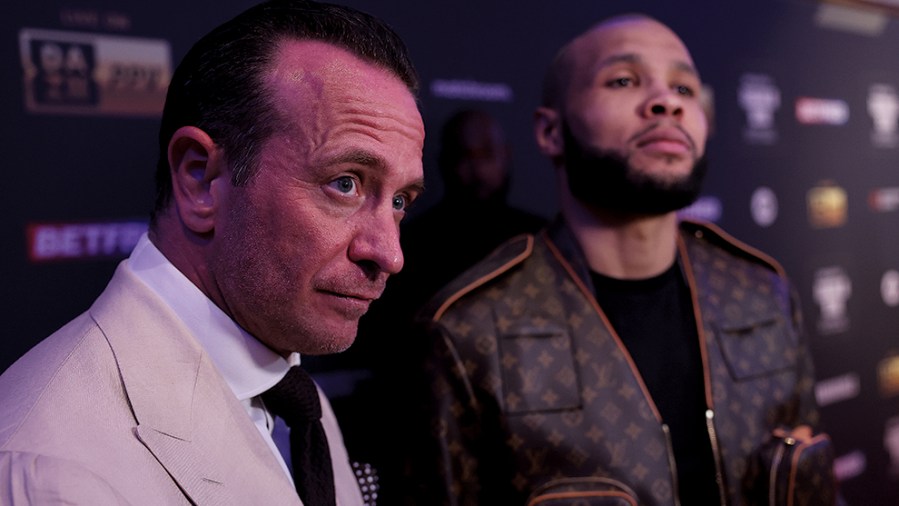 It wasn't vintage Vasiliy Lomachenko, but he still got the job done against Jamaine Ortiz in New York, writes Jack Hirsch

PERHAPS too much was expected of Vasiliy Lomachenko in his match against unheralded Jamaine Ortiz at Madison Square Garden’s Hulu Theater.

Lomachenko has raised the bar so high in the past that the question usually is not whether he would win, but how impressive he would look doing it. Against Ortiz, though, Lomachenko had to scamper to emerge victorious, rallying furiously over the second half of the match to win a unanimous decision on the scorecards of judges John McKaie (115-113), Mark Consentino (116-112 – same as BN), and Frank Lombardi (117-111). Charlie Fitch was the referee.

Of course, when it was over those who fancied Loma’s chances in his proposed encounter with Devin Haney this spring had to reevaluate their opinion. Not that Lomachenko had anything to apologise for. He did defeat an unbeaten fighter in Ortiz – and once he found his rhythm looked like the Lomachenko of old. And although Lomachenko relocated to California to train for the match, his mind had to constantly be on war-torn Ukraine, where he will return to serve in the military.

Things can be spun various ways as to why Lomachenko did not look like the pound-for-pound claimant we have been used to seeing, but the bottom line is that, at close to 35 years of age, Vasiliy has entered the phase of his career where he is no longer a great fighter, but merely a very good one who can still pose a serious threat to anyone on a given night. But for that to happen Loma would have to perform considerably better than he did against Ortiz.

As for Ortiz, things could be looked at two ways. After such a promising start, the Worcester, Massachusetts’ boxer’s inability to sustain his early pace cost him what could have been a massive upset. Conversely, his strong showing is sure to have made him new friends and get other matches of substance down the line.

One thing is for sure: Ortiz was not intimidated in the slightest. As a onetime sparring partner of Lomachenko’s, he’d shared a ring with him enough times to not be in awe when they fought for real. He took it right to Lomachenko in round one with a whirlwind attack. When the round ended, Lomachenko walked back to the corner with a bruise under the right eye. Ortiz looked bigger, faster, and stronger.

It was not until the third round that Lomachenko got somewhat untracked. From his southpaw stance he landed a left that had Ortiz temporarily reeling.

Ortiz finished the fourth round attacking hard, but, outside of a strong eighth, Lomachenko had the better of things. Even Ortiz indirectly acknowledged this when he switched to southpaw in the sixth to try to change the momentum of the bout.

Ortiz had his own bruise under the left eye. He had never been 12 rounds before. In the later rounds he frequently held, obviously concerned with having to go the distance. Lomachenko worked his way inside behind an effective jab and targeted the body.

Sensing it was close, Lomachenko enjoyed a big 11th round and then outworked Ortiz in the 12th. When the final bell rang, it became apparent that Lomachenko had erased any deficit he might have needed to make up.

Perhaps the Ortiz fight will turn out to be nothing more than a stage in training for Loma in his preparations for a bout against Haney. Loma will not be the betting favorite in that mooted fight, but he will surely be the sentimental one.

Robeisy Ramirez certainly did not win Olympic gold by boxing in the style he has adapted in the professional ranks. The Cuban slowly pursues opponents in what is a cat-and-mouse type game, then when he catches up unleashes an all-out assault. The scheduled 10 with Argentina’s Jose Matias Romero had the close-to-5,000 in attendance subdued for the most part. But, as is the case with most stoppages, the conclusion will be remembered Reed more than what transpired before it.

That it lasted until 2:20 of the ninth was a surprise after seeing how easily southpaw Ramirez handled Romero in the opening round. Romero went down for the first time in his career from two lefts and basically went into a shell after that, becoming much more concerned with not getting hit than winning. Ramirez followed him around the ring landing good body punches from time to time while waiting for an opportunity to present itself. That happened in the ninth when a long left hurt Romero. He stumbled into the ropes and Ramirez then showed the aggression that had been missing all match. Romero was soon forced into a corner and hit with a couple of jolting lefts. He started to sag when referee Danny Schiavone stepped in and made a superb stoppage.

Considering Romero’s history of durability, Ramirez got the result he needed and will be in prime position to fight for one of the featherweight belts by next summer.

If Nico Ali Walsh was not the Grandson of Muhammad Ali, the report of this fight would be strictly relegated to the results box. But his family name enables him to get more exposure than a boxer of his inexperience would normally get.

Ali Walsh is still very much in the learning stages. He is being matched carefully by Top Rank, who were probably a bit edgy during certain stages of his fight against Montana’s Billy Wagner, a man with a background in bare knuckle fisticuffs. After Ali hurt and cut Wagner in the opening round of the six, he was buckled late in the second. Wagner held his gloves up stiffly, but was able to reach Ali with clean punches now and then. Ali could not afford to coast, having to come on strongly over the last three rounds to pull out the verdict. Scores were 59-55 and 58-55 twice.

It was a slow-paced affair which saw Ragan content to do little more than jab and go to the body on occasion. However, in the seventh round he was hurt and spit out his mouthpiece twice. It looked to be intentional. Referee Johnny Callas warned Ragan he would lose a point if it happened again, but even deducting one would not have made a difference. Ragan recovered while the mouthpiece was being retrieved twice. Needless to say, this was unfair to Lebron.