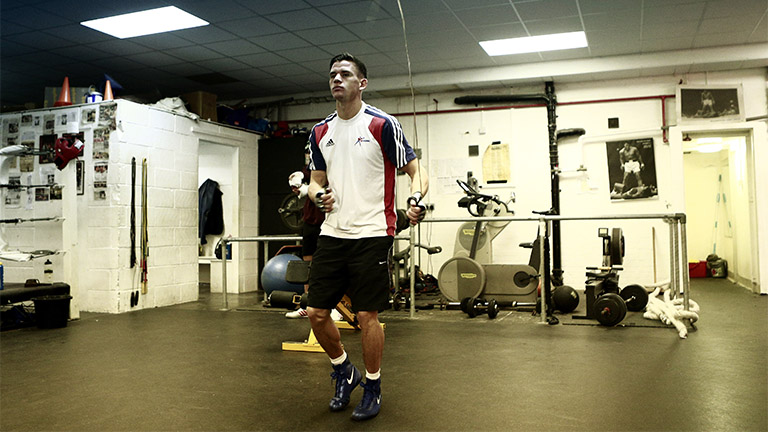 It's time to start thinking about getting back in shape. Fighting Fit spoke to a panel of experts about living the life outside of training camp

What training do you like your fighters to do between camps?

TONY SIMS: I like them to just tick over. That means running a couple of times a week and doing little bits in the gym twice a week. 30-40-minute jogs to keep the weight off and then come down to do a bit of technical work – a lot of shadow-boxing and pad work. It’s a good time to work on getting technical stuff right.

TREVOR WITTMAN: Between camps I like them to mostly stay in the gym. I always say they should get one or two weeks off and get away from the fight game because it wears you down. Once we get back into the gym it’s usually three days a week at a much lower workrate. That’s the time when you get to work on new techniques.

ABEL SANCHEZ: I like for them to stay not necessarily in shape but just to keep their weight down. To get them in shape for a fight I only need six-to-eight weeks depending on their weight. Just running is fine for that, three or four miles every other day. I don’t want them to set up a routine.

RICARDO DA SILVA: It is important my guys are always doing strength and conditioning. Everybody who fights professionally has very good technique, so you need to be stronger and fitter. It will only be a 25-minute workout to simulate a fight, and then they come to the jiu-jitsu, the grappling, the MMA class, boxing or Thai boxing.

How much weight can they put on and why?

SIMS: It’s up to the individual; I don’t want them to put on too much, but they all vary. Everybody’s bodies are different, some put on 14lbs, some 7lbs, some 21lbs, but it’s okay as long as they’re being professional about what they’re doing and don’t go too crazy. You can’t monitor them all the time.

WITTMAN: Every fighter is different and every weight class varies.
I never like a guy to go hugely up in weight just because shedding it is a big process. I like to stay disciplined and not get 20 pounds heavier. Most of the guys I deal with are very professional when it comes to this sort of stuff.

SANCHEZ: I would like to see them come to camp 10-12 per cent over their fight weight. I’d like that to be consistent but that may be asking too much. It’s a lifestyle they need to maintain; they must not abuse themselves. They’re not coming to camp as a fat farm, it’s to get in shape for a fight.

DA SILVA: Fighters are different. Jimi [Manuwa] doesn’t like to cut too much weight; he fights at 93 kilos, and normally he weighs about 97-98. Tim [Radcliffe], on the other hand, is about 80 kilos and he cuts to 70. It’s not just important how you lose the weight, it’s important how you put it back on as well.

What are the main rules for fighters out of camp?

SIMS: Mainly that they tick their bodies over, and don’t just stop still. I want them to try to eat as sensibly as they can. They are deprived of a lot of sugary food while they are in camp so when they have a break the body sometimes can’t help itself. But don’t go too mad.

WITTMAN: Stay in the gym, even if you’re not training. Help the other pros out, take a couple of guys underneath your wing, and keep your mind sharp. If you’re not physically training you need to be mentally training. Also, stay focused on what you’re doing; don’t start enjoying the luxury of the life until you’ve reached your final goal.

SANCHEZ: They should get some running in, not training camp running but enough to keep the weight off. I would hope they don’t do alcohol or drugs, and that they try to keep from staying out too late at night. This is their career, their business and they have to stay disciplined.

DA SILVA: They need to carry on training. That’s the time to practise everything and learn different things. Don’t put too much bodyweight on and always keep in shape and condition. Do something else apart from the martial arts that you enjoy and that involves fitness, like playing football
or paintball.

Explore the training section of our website for more information