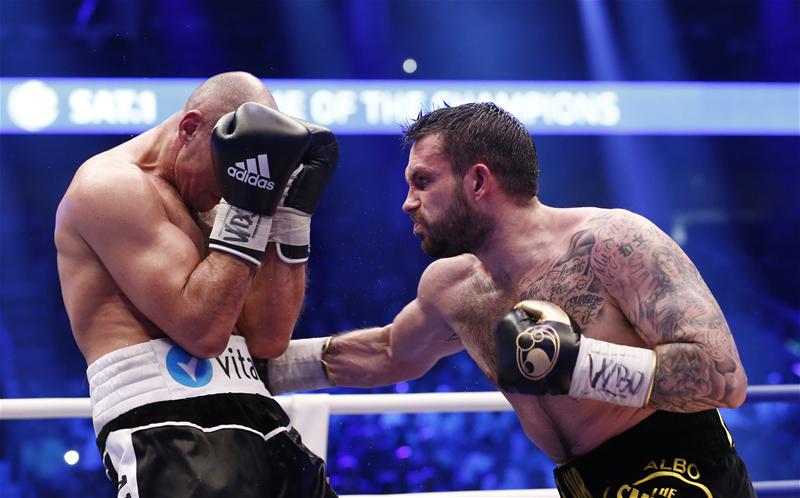 Refresh the page for the latest updates

“He was better tonight,” Paul Smith had to admit. “I never quite recovered from the body shot or the head shot in the fifth or the sixth… It takes it out of you.

“His defence is quality,” Paul continued, “I haven’t got quite the strength in my arms as Arthur Abraham has got to stop the shots coming through. He’s like a brick wall.

All three judges score for Abraham. He defends his title with a unanimous decision victory.

But as the bell tolls to end their struggle, Abraham smiles, confident he’s won this.

Game, gutsy … and a good last round for Paul Smith, whipping shots in.

Not sure why they’re stopping to have the ring mopped.

Smith looks pumped up as the last round begins.

In the 11th round, Abraham batters at Paul’s guard, putting Smith on the backfoot.

Smith does have a punch on him. But he’ll need it to shift the momentum of this fight.

We go into the 10th round. The champion seems to found his rhythm here.

To start the ninth Abraham still on top of the action. Slugs Smith with a massive right.

Abraham drives Smith round the ring. The champion looking dangerous.

Abraham comes out for the eighth, landing a sequence of stern jabs. But he is, as advertised, fighting in (shrewd) bursts.

Smith answers pressure with fire at the end of the seventh round.

Smith jabs through and heaves a right hook to the champion’s solid midriff. Abraham worries at Paul’s defence as he leans into the ropes. But Paul appears to be finding an opening for his left hook to the body.

Abraham’s jab flickers in. He lets Paul come on to him and the Liverpudlian brings hooks round to his body. Abraham steps away from a left hook to the body. Paul slings a right hook round to the head. A heartening moment of the success for the Briton.

Into the fifth round Smith is hitting his guard. This’ll tire him. Abraham counterattacks hard. The champion jolts him with straight right hands. Smith has to roll away to escape.

Smith works a long one-two. He tries to get a right hook round Abraham’s guard. Arthur hurts him with a right hook. He presses home that advantage. Smith has to fight him off. Abraham hammers that right straight in. Smith needs to back off here.

Smith times his left hook well as the champion drops his guard for a moment. Paul hits the jab high and to the body, forcing Abraham to stay behind his gloves. Arthur get big cheer every time he attacks forward.

Abraham hammers at his body with big hooks. Abraham imposes that physical strength in the second. Paul fires in good shots to get himself off the ropes.

A confident first round from Smith.

Not sure if a ring announcer with a voice that rises from the bowels of hell hissing, “It’s time to rock and roll” is going to catch on.

Nice that the Sauerlands have found someone to gargle the national anthem.

Not so sure about the terrifying voiceover that welcomes Abraham to the ring… Admittedly the band that strikes up now is not particularly intimidating. However tremendous dinner jacket look for Abraham as he strolls in. Insouciant.

Paul Smith is on his way to the ring…

So England waits, anxiously, for the main event. By all accounts Paul Smith has been calm and composed ahead of his second shot at a world title. You have to wonder how long Abraham can stay at the top. The champion does, potentially, have a massive German fight with Felix Sturm ahead of him if he can retain his WBO title. He’ll be motivated. Smith was surprisingly competitive when the two first met in September and he and Joe Gallagher will have the plan to defeat Abraham. Executing it however is a different matter. Paul still has yet to beat an opponent of this calibre in his career.

The decision is unanimous and goes to Ricci, the better stylist in there. The Italian bellows with delight and leaps on to someone, presumably his own cornerman. We have a victor from the away corner…

Ricci leads impressively with his backhand and swings his left freely in. Leaning on the ropes, Ricci connects as the German tries to get to him. Ricci finishes the last round well.

Kalle Sauerland, the promoter, is up out of his ringside seat to roar at his man.

Ricci, in contrast to Koelling, drops his hands, twitches his body to stay mobile. The Italian opens up with a hook to drive the German back.

They rip shots to the body and Koelling cracks in a blow to the head. Enrico leaps in to land his right.

A fight has broken out as we go into the last three rounds of Koelling-Ricci.

Ricci’s straight punches dart in, while Koelling bustles him to the ropes. Koelling is cut and Ricci is pressing the attack.

Koelling, the heavier handed of the two, trundles forward but waits too often behind his high guard. The Italian is letting his hands go more freely. Into the seventh round.

Ricci attacks off the back foot with a fast flurry. He looks the more relaxed in there.

German light-heavyweight Enrico Koelling grinds forward, he slugs Italy’s Mirco Ricci with a hard right in the second but the tricky Italian begins to frustrate him in the third round.

What would you like to see next for David Price, another confidence-builder back in Liverpool? Dereck Chisora? Or straight in with Tyson Fury or Anthony Joshua? Let us know, tweet @boxingnewsjd

“That was the best of both, I got a few rounds under my belt and finished it off with the stoppage. Perfect really,” Price commented. “He’s pretty solid there’s no way I was going to jump in and start blasting him out.”

Price could have done with a more explosive outing to generate momentum again but insisted patience is the order of the day. The Liverpudlian is now due a fight back in England. “Time to go home now I think,” he said.

Tyson Fury or Anthony Joshua would be appealing rivals for the heavyweight. “I’ve lost twice, I’ve got nothing to lose. A man with nothing to lose is dangerous,” David warned.

In the sixth round Price drops the Brazilian with an excellent left hook. Price puts him down a second time in the round with a right. Costa rises again only for Price, with the right then the left crashing in for a third knockdown, to claim a ruthless finish.

Costa finally steps forward with a brace of hooks. Price fields them.

David clips him with a right hook but it’s not one of his power shot. As the fourth round progresses, Price finally begins to drive in more aggressively with the cross.

Price canters back from Irineu’s right. Unruffled, he returns to his methodical jabbing.

In control after the first round, Price lands his right and follows it with a left. The Englishman is taking his time here but in charge.