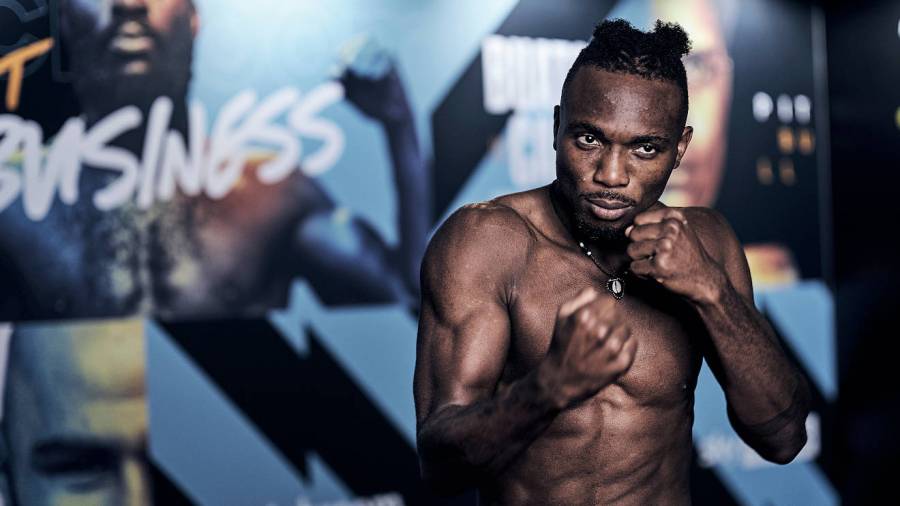 Linus Udofia will get his chance against Denzel Bentley, writes Elliot Worsell

SIX years into his professional career, Luton’s patient and promising Linus Udofia finally gets his shot at the British middleweight title on May 13 in London (Indigo at The O2, Greenwich). To win the belt, the former English champion will have to overcome the threat of Battersea’s Denzel Bentley, a man who not only once held the belt but has been on Udofia’s radar for some time.

“I always assumed I would box him at some point,” Udofia told Boxing News. “He’s a top-class operator, and I consider myself a top-class operator as well. He’s won the British title before. He wasn’t successful defending it against (Felix) Cash (in April 2021) but he obviously wants to right that wrong – maybe not against Cash, but he wants his old belt back.”

Indeed, Bentley, 15-1-1 (13), won the British title back in November 2020 with a fourth-round retirement stoppage of Mark Heffron (due to a swollen left eye), only to then lose it against Cash, who stopped him inside three rounds in what was Bentley’s first defence.

If a shock at the time, the shock had more to do with the manner of defeat than the defeat itself. The fight, after all, was deemed a 50/50 contest beforehand, with even those backing Cash surprised to see him end matters as quickly or as easily as he did.

Udofia, however, saw it coming – especially after the first round.

“After the first round I knew it wasn’t going to go the distance,” he recalled. “That’s no disrespect to Bentley. Cash was just on a different level. You could see it as soon as the fight started and the styles started to gel.

“We all knew how good Bentley was, and what his potential was, but we didn’t know how good Cash was. When Cash beat him in that fashion, then we knew. He was dominant. He didn’t miss a step. He did everything right and closed the show in devastating style. He showed he was way above domestic level.”

Now, of course, it’s the turn of Udofia to reveal the difference in levels between himself and Bentley on May 13. He must first assume his opponent has grown from the experience with Cash, then carry the conviction of a man who believes he can repeat the trick. “I think Denzel will have learnt a lot from that loss,” said Udofia. “I think (Frank) Warren did the right thing getting him out again not long after that, just to get him going and get some confidence back.

“I’m not sure his style will have changed, though. To an extent, I think he was just a rabbit in the headlights that night. Not a lot of people expected Cash to do that.

“At his best, he’s got very good lateral movement. He really employs that Philly-shell defence, which has its advantages and disadvantages. He’s got a very good counter right hand when you throw your own right hand. He does a lot of things well. He’s very cagey and cute and obviously carries a lot of power.

To date, Udofia’s career has been something of a slow-burner, with 13 of his 17 pro fights taking place against the humble but no less illustrious backdrop of York Hall, Bethnal Green. Unbeaten at 17-0 (9), his most notable wins arrived in 2019 and 2020, when, in English title fights, Udofia beat both Tyler Denny (MD 10) and John Harding Jnr (TKO 9).

“That Denny fight brought me on the most,” he said. “You’ve seen how far Denny has jumped. He’s really stamping his name on the division now and showing how good he is.

“On paper, it was a 50/50 fight and I think I proved a lot of things that night. I was chin-checked and proved I could pull it out the bag. That was a fight to show me the levels and Denny brought it out of me.

“Right now, I’m very happy with where I am. Everything has happened at the right time. This (the British title shot) is what should be happening at this stage of my career and I feel like I’m in the best place for it. Everything just feels right at the moment: right age, right level, right amount of experience.”

Rather than allow himself to become impatient, Udofia, 28, could always see the sense in building his career slowly, carefully. Now he looks back on those formative years with appreciation.

“I got built properly. There was no fast-tracking or rushing to a level I might not have been ready for,” he said. “When the spotlight’s on you, people demand more from you, and then you get pushed into fights too early. Next thing you know it doesn’t work out.

“I’m very thankful for the way my career has been structured. It has allowed me to fly under the radar and be a bit of a hidden secret. Now I’ve finally got the stage, I feel like I’ve done it properly.”

A humble character, Udofia concedes his upcoming fight with Bentley is a 50/50 affair and that the winner will be the one who produces on the night. Yet, equally, he will be conscious of the fact that the last time Bentley was involved in a so-called 50/50 affair with the British title at stake, it ended within just three rounds.

“Boxing purists know the British title is the most prestigious belt in Britain and it is something I’ve always wanted on my mantelpiece,” Udofia said. “Once it’s mine, you’re going to see tears.”