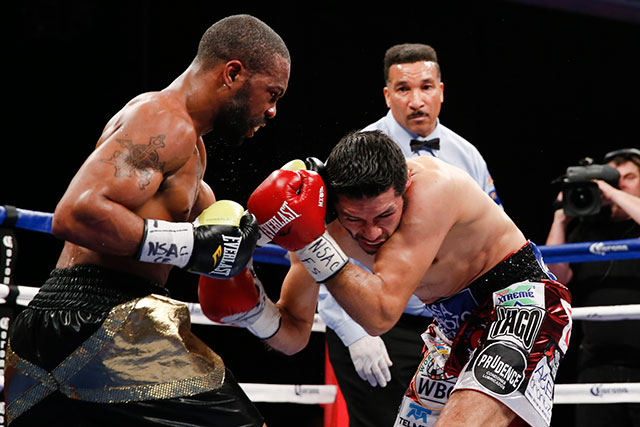 BIG story of last weekend was the victory by Gary Russell Jnr over Jhonny Gonzalez for the WBC featherweight title in Las Vegas. What impressed was not that Russell Jr won – but that he did so in such crushing fashion with a fourth-round knockout.

The Maryland southpaw confirmed he is a real factor at 126lbs and not just an overhyped, over-protected pretender riding high because of having influential Al Haymon as an adviser. That appeared to be the case in Gary’s first world title crack, when Vasyl Lomachenko outworked him over 12 rounds for the vacant WBO belt last year.

Too many easy matches caught up with Russell Jnr that night, when Lomachenko seemed the more complete professional despite it being only the third pro fight for the double Olympic champion from Ukraine.

But credit where credit’s due: Russell Jnr has regrouped and, when his second chance came, he seized it in convincing style. Gonzalez may be a veteran, but he has a huge left hook, which he used to demolish Abner Mares in one round. He wasn’t a lucky champion just waiting to be dethroned.

It just goes to show that losing your first title fight needn’t be a career-defining setback. Many other top boxers came up short in their first bid for global glory only to achieve great things; two men who left their mark on the featherweights come to mind in Alexis Arguello and Eusebio Pedroza.

Fans remember that Arguello won titles at three weights (126, 130 and 135) before two epic fights at 140 with Aaron Pryor. But how many recall that the classy Nicaraguan was outpointed by Panama’s Ernesto Marcel in his first featherweight title crack (WBA version)?

And while Pedroza held the WBA 126 crown for nine long years before losing to Barry McGuigan at the QPR football ground, not many realise his first world title shot – down at bantam – saw him wiped out in two rounds by Mexico’s Alfonso Zamora.

It will be interesting to see where Russell Jnr goes from here. There are interesting matches to be made at 126lbs, although three of the division’s top men (Lomachenko, WBA king Nicholas Walters and IBF boss Evgeny Gradovich) are with Top Rank, who until recently did not do business with Haymon or Floyd Mayweather, whom Al advises. (Lomachenko-Russell Jr happened because it was an ordered fight that went to purse bids).

Things are changing, however. Mayweather fights Top Rank client Manny Pacquiao on May 2 and one night earlier Mickey Bey, one of Floyd’s stable, defends his IBF lightweight belt against Top Rank fighter Denis Shafikov. That doesn’t guarantee Gary will box Walters, Gradovich (who fights Lee Selby in London on May 30) or even in a return with Lomachenko (who boxes on the Floyd-Manny undercard). But whoever he does fight will now know he is for real.

GONZALEZ: “I did not expect Russell Jnr to fight like that”