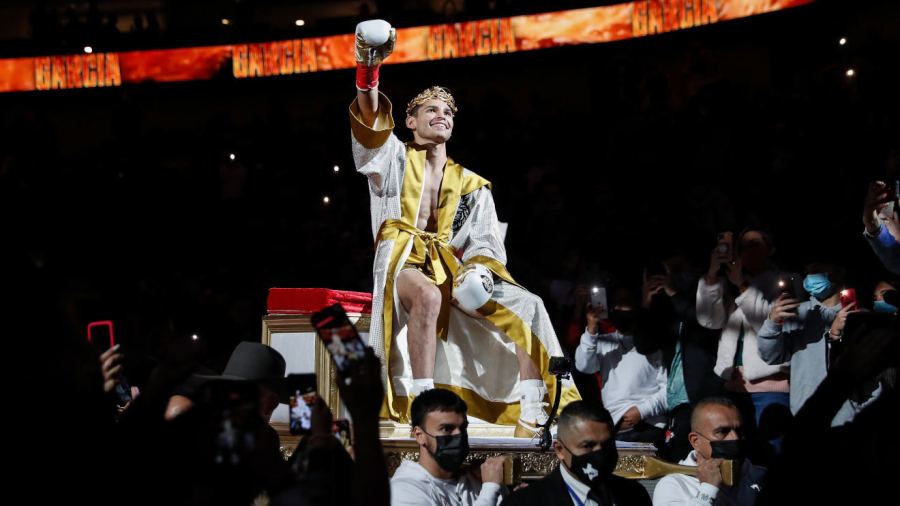 WHY HE IS ON THE LIST:
Lopez lived up to his nickname by taking over the lightweight division three months ago. Up against Vasiliy Lomachenko in a clash for the undisputed crown at 135lbs, Lopez produced a display of prowess and maturity that belied his youthful age. By beating a man who going in was considered by some as the top pound-for-pound fighter in the sport, Lopez announced himself as the king of the lightweights. He was a worthy winner of Boxing News’ Fighter of the Year award for 2020.

BEST PUNCH:
Although the lead left hook is a particular favourite of Lopez’s, his most potent strike is the right hand down the middle. Thrown with punishing power and unerring precision to either the head or body, it is a debilitating punch – just ask the likes of Richard Commey, Edis Tatli and Mason Menard.

STANDOUT VICTORY:
Obviously his star-making triumph over Lomachenko. There were not many people out there who were picking Lopez beforehand, but the underdog proved his credentials with an elite-level performance. By starting fast, fighting aggressively and showing Lomachenko no respect, Lopez stifled his renowned rival’s rhythm. His clever tactic to frequently target the midsection was one of the key reasons for his unanimous points win.

X FACTOR:
Not so much one attribute but rather a combination of various qualities. Lopez’s all-round attacking game is exemplary. Power, speed, accuracy, poise and adaptability are just some of the strings to his bow.

WHO HE SHOULD FIGHT NEXT:
After defeating Lomachenko, prevailing against Gervonta Davis would provide Lopez with another pound-for-pound scalp. A meeting between these two gifted, power-punching aces would set pulses racing. It is undoubtedly one of the best bouts that can be made in boxing.

WHY HE IS ON THE LIST:
A fistic genius and one of the finest amateur boxers of all time, Lomachenko had close to 400 contests in the unpaid ranks, losing just once. After garnering gold medals at the Olympic Games (twice), World Championships (twice) and European Championships, the sublime southpaw claimed WBO featherweight honours in only his third professional outing. The WBO super-featherweight title followed in fight number seven, with the WBA lightweight belt arriving after 12 bouts. The WBC and WBO straps were added to his collection at 135lbs, before Teofimo Lopez came and took his titles.

BEST PUNCH:
Lomachenko pumps out rapid-fire jabs from an assortment of angles. Constantly feinting and making use of his excellent footwork, opponents struggle to see where the next stiff, tormenting right hand is going to come from.

STANDOUT VICTORY:
Gary Russell Jnr and Guillermo Rigondeaux are two of Lomachenko’s most high-profile victims. Both boxers were unbeaten at the time, and neither has lost since. However, his 10th-round stoppage of Jorge Linares in May 2018 particularly stands out, as it took place up at lightweight, whereas the Russell and Rigondeaux fights were contested at featherweight and super-feather respectively – divisions which are more suited to Lomachenko’s natural size.

WHO HE SHOULD FIGHT NEXT:
Avenging his surprise defeat to Lopez is the primary task on Lomachenko’s to-do list. There were signs in the second half of the bout that he was beginning to get to grips with Lopez somewhat, which is why a rematch would be fascinating.

WHY HE IS ON THE LIST:
As his most recent matchup – against Leo Santa Cruz in October – was fought at the 130lb limit, Davis is ranked at super-featherweight in Boxing News’ official world ratings. Nevertheless, as Davis’ spurious WBA secondary lightweight strap was on the line in this contest, in addition to Santa Cruz’s WBA super-feather crown, he still has one foot in the 135lb division. Size-wise, lightweight is a more comfortable fit for the stocky southpaw, so his future is likely to lie in this weight class.

BEST PUNCH:
How can you look past his lethal left uppercut? Davis took home Boxing News’ 2020 Knockout of the Year prize thanks to the phenomenal finish he provided against Santa Cruz. After slipping a right hand thrown by Santa Cruz in the corner, Davis pivoted to his left and uncorked a sensational uppercut from his backhand. The stunning shot removed Santa Cruz from his senses and led the referee to immediately terminate proceedings in round six.

STANDOUT VICTORY:
Santa Cruz was a four-weight world titlist who had only tasted defeat once before, yet Davis made a huge statement by storming past his respected rival in devastating fashion. The win catapulted the three-time world super-featherweight champ into the pound-for-pound top 10.

X FACTOR:
The explosive, game-changing power that Davis possesses is his most formidable quality. All but one of his adversaries have been beaten inside the distance, resulting in a frightening 96 per cent KO ratio.

WHO HE SHOULD FIGHT NEXT:
It has to be Teofimo Lopez. There has been talk of the lightweight leader potentially moving up to the super-lightweight category, but hopefully not before he shares a ring with Davis. It is a fight that boxing needs.

WHY HE IS ON THE LIST:
Garcia is the latest fighter to join the current band of lightweight luminaries. The rangy puncher boasts a massive following on social media, but against Luke Campbell earlier this month, he proved that there is substance behind the hype. After being knocked down in the second round, the vibrant Garcia regained his composure and proceeded to bombard Campbell with heavy blows from both gloves, eventually leading to a breakout seventh-session stoppage victory.

BEST PUNCH:
Garcia’s honey punch is his left hook. Unleashed either upstairs or down, it is hurled with an accurate and punishing force. Campbell was sent to his knees after catching one clean in the ribs, while Francisco Fonseca and Romero Duno were both caught cold with slamming shots to the head.

STANDOUT VICTORY:
Conquering Campbell was an important accomplishment for Garcia. The win marked the moment that the touted talent went from exciting prospect to serious contender. He dealt with the pressure impressively.

X FACTOR:
The thing that sets Garcia apart from his peers is his crossover popularity and immense marketability. With his film-star features, confidence and charisma, the Instagram favourite is a promoter’s dream. Crucially, he has so far been able to back up the social media ‘likes’ with performances in the ring – the place where it really matters.

WHO HE SHOULD FIGHT NEXT:
Of the five fighters on this list, Garcia and Devin Haney are the youngest at 22 years old. They are each a rung below the more established Teofimo Lopez, Vasiliy Lomachenko and Gervonta Davis on the boxing ladder, so it makes sense for the two precocious hotshots to face off against one another, before stepping up to the next level.

WHY HE IS ON THE LIST:
Flawless so far as a pro, Haney has steadily ascended the lightweight rankings, one dominant victory at a time. Whether winning inside schedule or succeeding convincingly over the long route, the lightning-quick prodigy has showcased his undeniable skill. He holds a version of the WBC championship at 135lbs, although Teofimo Lopez owns the organisation’s true title (despite its absurd ‘Franchise’ label).

BEST PUNCH:
For a fighter still so young, the variety that Haney possesses is extremely impressive. Of the wide array of weapons that make up his arsenal, the most valuable and consistently effective is his lengthy jab. Thrust out at a blistering pace, it softens his opposition up and leaves them susceptible to vicious follow-up hooks. The stinging rangefinder is often the foundation on which Haney’s rattling combinations are formed.

STANDOUT VICTORY:
Yuriorkis Gamboa is unquestionably the premier name on his record, but Haney’s most dazzling display so far came against the previously undefeated Zaur Abdullaev in September 2019. Haney needed just four rounds to thoroughly thrash Abdullaev and force him out of the fight.

X FACTOR:
Haney’s hand speed is something else. Even when up against aggressive opponents who press forward, he is able to remain unperturbed due to his scintillating swiftness. More often than not, his foes find themselves swallowing punches that they have not even seen coming, and as they say, it is the punch that you do not see coming that is the most dangerous.

WHO HE SHOULD FIGHT NEXT:
A showdown between Haney and Ryan Garcia would represent a mouth-watering mix of strengths and styles – Haney with his speed and Garcia with his power. Having met multiple times as amateurs, they are perfectly placed to renew hostilities as pros.

THE OTHERS
These six fighters are ones to watch out for

Shakur Stevenson
A former WBO featherweight boss, the outstanding Stevenson moved up to super-featherweight last year and has his sights set on claiming world honours there. His next stop after this would logically be lightweight.

George Kambosos Jnr
Tenacious and determined, Kambosos [below] overcame Lee Selby in an IBF final eliminator to put himself in prime position to challenge Teofimo Lopez. Not lacking in self-belief, he would no doubt be confident of causing an upset.

Masayoshi Nakatani
An all-action aggressor, the long and lean Nakatani is coming off a thrilling, come-from-behind victory over Felix Verdejo. The entertaining slugger also gave a good account of himself when opposing Teofimo Lopez.

Gary Russell Jnr
Russell is a real wildcard, considering he has spent all of his career as a featherweight so far. The long-time WBC 126lb champion has made no secret of his desire to jump up two divisions and test himself at lightweight.

Denys Berinchyk
Following a successful stint in the amateurs, where he medalled at the Olympics and the Worlds, Berinchyk entered the pro ranks and has since advanced to the fringes of world level. Can he now make that next step?

Michel Rivera
Rivera is yet to contest a 12-rounder but he is nonetheless brimming with potential. Now showcasing his talents in America, he has defeated Fidel Maldonado Jnr and Ladarius Miller in his two most recent appearances.