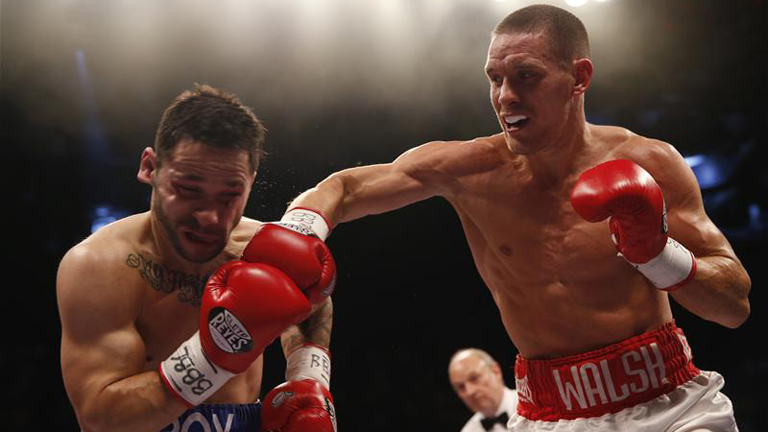 Can you tell us what you think of Gervonta Davis?

“He certainly has potential and star quality – that was clear to see when he beat [Jose] Pedraza. But he has to come through me first.  I don’t see any other way than me winning.  If he’s going to be a star in the future, it’s going to have to be with a loss after fighting me.”

Are there advantages to fighting at home?

“I thank Frank Warren for that and giving me that advantage.  I think it all depends on his mental capacity.  He’s coming to a foreign country.  Provided that he adapts to the environment and change of scenery, then we’ll find out that night.”

You were Pedraza’s mandatory so were you surprised that Gervonta won that fight and in that dominant a fashion?

“I was to be honest with you.  My prediction was Pedraza to win on points.  I thought Pedraza had all the attributes and tools to get the job done.  But then on the night watching the fight, I was surprised by the way Pedraza went about his work.  I thought Gervonta looked brilliant and mature beyond his years.  I think he put on a really good show but I thought Pedraza could have gone about it a little bit better.”

What are your advantages in the fight against Gervonta Davis?

“First and foremost, I don’t think he’s completely overrated, but I think there are still a lot of questions to be asked of him.  He looked very good and brilliant against Pedraza.  The only other reputable fighter on his record is Cristobal Cruz.  There are a lot of question marks lingering on.

“I feel like I’ve been in tougher fights than him.  I feel like I’ve been in longer fights.  I think I have a better boxing IQ than him.  He’s very powerful, very physical and very fast, but we haven’t seen him in a long fight or a dog fight or a grueling fight though.  I will certainly ask all these questions.  I’ll do it any which way that it has to go.  I’m more than confident I’ll get the job done.”

Is it key to take the fight into later rounds?

“I think possibly, yeah.  I think that could be one angle to look at it.  We’re not going to really know until the first bell rings.  We all have game plans, but good fighters have to adapt. There’s going to be ebbs and flows in this fight, but I think the better fighter will prevail and I think that’s me.”

Boxing is hot in UK, how much of a benefit do you think will that be for you?

“I think it’s definitely beneficial to be fighting at home.  I don’t live far from London so I won’t have to leave my house until a couple of days before the fight and obviously my sons will be there in support for me.  It’s definitely beneficial.  I want us both to get a fair crack and I’m sure it will be.  When you’re the home fighter, you feel more obliged to dig a little bit deeper for your home fans who are cheering for you. So that’s what I’ll do.”

What is your prediction for the fight?

“Like 21 previous times, I’ll always predict I’ll win.  So that’s what I’ll predict again.  One thing is factually certain, I’ll give my absolute all.  My prediction is I’ll come away with victory and the belt, whichever which way I have to.  I’ll find a way to come away with that belt.”

Over here in the U.S., the sentiment is that Gervonta is the favorite in the fight. Do you think you’re the favorite because of the experience that you bring to the ring?

“I don’t think I’m the favorite but I’m not a 3-1 underdog.  When I was told that, I thought I must be fighting three people.  I’ve never been a 3-1 underdog.  I’m a big underdog apparently, but certainly not in my eyes.  In my eyes it won’t be a massive shock if I win this title.  The U.S. fans think it will be a walk-over, but that couldn’t be more further from the truth.  I can understand him being the favorite with all the hype and Mayweather behind him, but I’m baffled by being that much of an underdog.  But we’ll find out.”

Is there extra motivation in being the underdog?

“Yes, it’s extra motivation.  My friends are betting on me and when I win, they’ll have a great night.  This is the first time I’ve been the underdog in my pro career, and I’m really enjoying being the underdog.  I’m really thriving on it.”