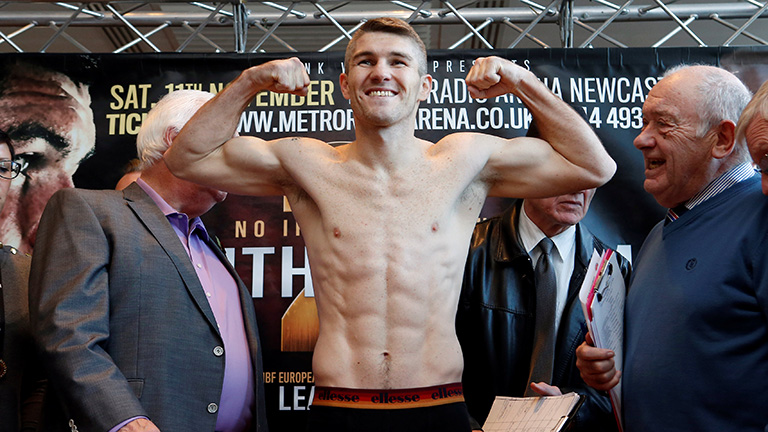 But Liam Smith is determined to press for his mandatory shot at WBO champ Sadam Ali, writes Jack Figg

LIAM SMITH has discussed his heartache after making the decision to pull out of his WBO super-welterweight challenge against Sadam Ali, which had been scheduled for May 12 in America.

Smith pulled out of the fight last week citing a medical problem, as it was revealed the former WBO champion had suffered an allergic reaction and virus illness. The Liverpudlian confessed he was “gutted”.

“I’m gutted, that’s why it’s such a hard pill to swallow,” Smith said. “I’m okay and I’m not injured in the fact I’m not out with a bad hand or an elbow or back injury it’s just an allergy and a virus that kept me out of training for seven days.

“Two weeks before a world title fight, seven days on the couch is not good for no one and it was just the right decision to make, but it’s still a hard one to take and one I have to just move on from.

Smith has just one loss in the way of a ninth round stoppage at the hands of Saul “Canelo” Alvarez in September 2016 at the AT&T Stadium, Arlington, Texas. After the fight it was revealed Smith had suffered a cut during sparring.

The cut hindered Smith’s ability to proceed with sparring for the last four weeks of his camp, something “Beefy” felt affected his performance, adamant to learn from his mistakes the 29-year-old withdrew from his opportunity to regain the world title.

“I’m not going to go ahead with it like that again” Smith explained. “It’s not that the cut was the case for me losing against Canelo, but the cut cost me the chance to look better in that fight.

“I had moments in the fight where I know with a better camp of sparring I could’ve looked better and come out of it with more credibility than probably what I already got.

Mexican Jaime Munguia was announced as a replacement, however Smith is still hoping to challenge for the WBO title against the winner.

Smith said, “That’s my full focus now and making sure the WBO do the right thing and keep me mandatory for the winner of the Sadam Ali and Munguia fight. Frank [Warren his promoter] is going to push for that and there’s no reason why I wouldn’t still be mandatory.

“It’s a valid medical reason, I’ve got doctors notes and I’m just injured, I only wanted the fight postponed three weeks, a month but I’m sure because of Ramadan he has to fight now.”

Despite targeting the WBO strap, Smith refused to rule out other avenues and revealed unified champion Jarrett Hurd could be a possibility, after the American called him out.

“We’ve seen interviews with Jarett Hurd and he’s saying he’d like to fight me” Smith said.

“I think he meant if I had the WBO title as well but if I was to get offered Jarett Hurd for the WBA and IBF it’s a different kettle of fish.”