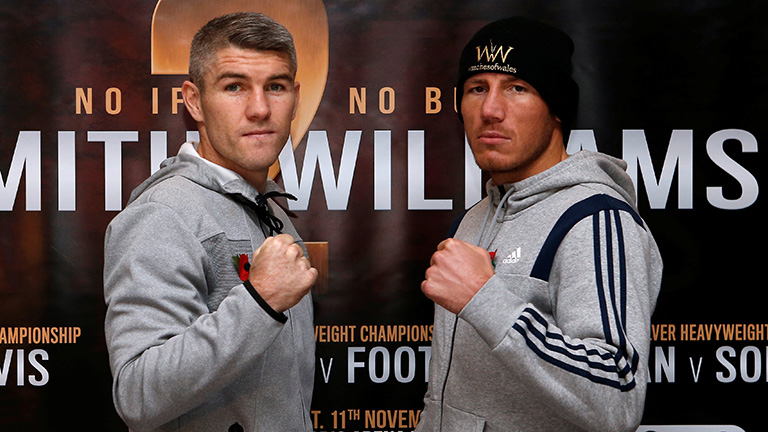 THIS weekend us British boxing fans are truly in for a treat. We have the rematch of one of the most intriguing domestic showdowns of last year. Welshman Liam Williams will once again square off with his bitter Liverpudlian rival Liam Smith in a grudge match that has fight of the year written all over it.

The first contest was a riveting battle that saw Williams sharp punching and dazzling footwork rack up a lead on the scorecards, only for Smith’s determination, experience and strength to claw him back into the fight as he proceeded to gather momentum over an increasingly tiring Williams. The contest was poised for an epic finale, only to be denied by a clash of heads which resulted in Williams trainer pulling his man out of the contest. Whether the clash of heads was accidental or deliberate is up for debate. Whether Williams could have finished the contest or Gary Lockett was right to pull him out is also a talking point. The needle and animosity in the build up to this rematch is centred around one point; was Smith on the verge of stopping the tiring Williams and therefore was Williams happy to have the fight stopped in the corner. The debate has raged, the insults have been thrown from both sides, the British boxing fraternity has been whipped into a frenzy. All that’s left now is the fight … and what a fight it could be.

Williams showed great boxing ability early in the first contest. He was fast, fluid and defensively sound. This had the markings of a breakout performance, a win which would have catapulted him into the big time alongside the likes of Puerto Rican legend Miguel Cotto. While Williams was boxing clever and trying to do most of his work from the outside, or using clever footwork to negate Smith’s need for an inside battle. The instances where he was caught on the inside were very telling. Liam Smith was able to put tremendous pressure on Williams and work his body consistently. The ever-increasing pressure coupled with the body assault had Williams visibly tiring and beginning to unravel from the fantastic form he showed early on. As Williams began to tire and become more ragged, or as Smith began to get in his groove and turn the screw (you will agree with either comment depending on who you side with) the fight became rougher, more violent and nastier. Head clashes, elbows, various other rough house tactics became more prominent. Liam Smith had been competing with a cut which he sustained early on from a clash of heads, he has implied he felt the clashes of heads on Williams behalf were deliberate. As the heat of the fight began to reach a scalding temperature Smith and Williams “clashed” heads once again, this time with Williams coming off much worse! Williams was left with a horrendous cut on the eyelid, his trainer Gary Lockett immediately pulled him out of the fight as soon as he saw the extent of the damage, (quite rightly so in my opinion, nothing is worth risking your eyesight). As with Froch–Groves 1, a controversial ending has paved the way for a highly anticipated rematch. I think the result of the second fight could hinge on a few factors:

Did Smith take Williams lightly the first-time around? Much was said before the first bout from Smith that he felt Williams was a step backwards and had never operated anywhere close to the level he had competed at. Did he prepare as thoroughly as usual? Will he turn up better prepared? This may be a factor.

Who will be more confident heading into the rematch? Will Williams take confidence from the fact he was boxing so well early on and ahead at the time the fight was stopped? Or will Smith be more boosted knowing that he started slowly, but managed to stay in the fight and start to break a visibly tiring Williams down? Only the two competitors will truly know how they felt in the ring.

Will the damage from the first fight affect the second?  Both men sustained bad cuts in the first fight and both took a lot of damage in what was a tremendous battle. Will either of their cuts reopen? Did the pace and violence of the first battle add any mileage to their clocks? This is a question that will only be answered once the first bell rings.

After analysing the above and being forced to pick a winner, I am going with repeat rather than revenge. I feel that with the confidence of knowing he was getting to his man, that he may not have prepared as well as he should have, and with the experience of being on the biggest stage before, Liam Smith will have his hand raised in victory. I anticipate a fantastic firefight, one in which both men have success but Smith with his come-forward pressure style will once again hang tough while Williams is racking up rounds, only to stage a late rally which will get him the nod on the scorecards … maybe even controversially.