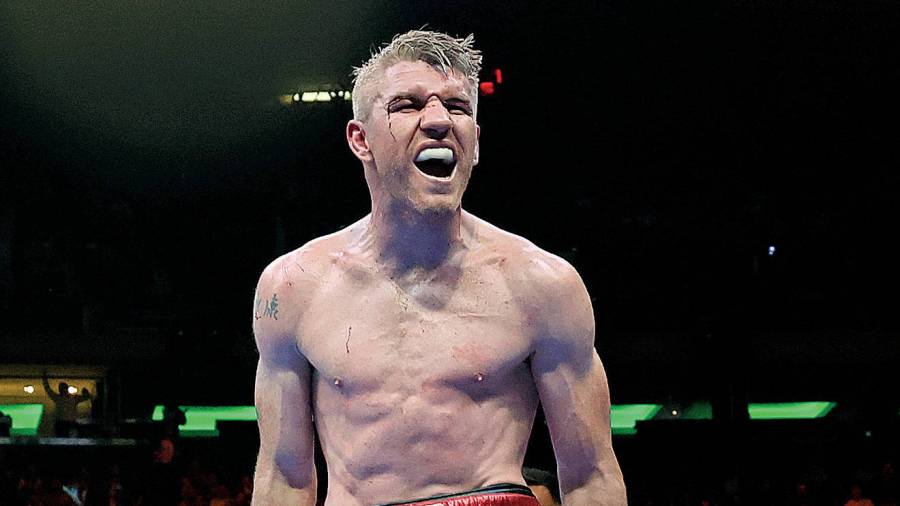 LIAM SMITH may not be the best in the world, but the talented veteran proved, once more, that he is a cut above boxing’s gatekeeper class. On the undercard of the Katie Taylor-Amanda Serrano world lightweight title bout at Madison Square Garden on Saturday. Liverpool’s Smith bullied and battered Las Vegas’ Jesse Vargas until referee Steve Willis intervened in the 10th round of their super-welterweight bout (set for 12) to put a stop to the abuse. The official time of stoppage was 0-41.

The win was Smith’s second straight since his disputed 12-round points loss to Madomed Kurbanov last May. Since being cut down by Canelo Alvarez in 2016, the Liverpudlian has carried on his career in workmanlike fashion, winning eight of 10 bouts. Vargas, on the other hand, suffered his second straight loss, and seems increasingly bound for retirement; the former welterweight belt-holder has already stated his intention to embark on a political career in his home state of Nevada.

While the first three rounds were mostly evenly-matched, it was clear that the fight was being fought on Smith’s terms: on the inside. After shaking off a cut in the third round, Smith began to turn the tide in his favour in the fourth, landing his cleanest punches of the fight up to that point. It was readily apparent that Vargas, who has suffered from conditioning issues in the past, was bothered by Smith’s rough-hewn pressure and relied heavily on trying to trade with his back against the ropes, a move that only abetted Smith’s his grind-‘em-down strategy.

There were some compelling, back-and-forth exchanges in the middle rounds, but Smith’s punches were more effective. Vargas, the smaller man, did not have the savvy or power to diminish Smith’s plodding, but steady, onslaught. In a lopsided sixth round, Smith unleashed combination after combination, and repeatedly found a home for the left to the liver. By the time Vargas answered the bell at the start of the 10th round, he was already a spent and defeated man. Smith moves up to ninth in the world rankings at 154lbs.

Katie Taylor and Amanda Serrano were not the only women who set a milestone Saturday night.

Crews-Dezurn set a fast tempo against Cederroos, beating the Swede to the punch over and over again. By the third round, Cederroos, who never seemed quite comfortable in the ring, was already bleeding from the nose. Cederroos managed to have some moments in the fight, but she was mostly outgunned and had no answer for the straights of Crews-Dezurns. Sparkle Lee officiated.

Austin Williams could soon become a player in the middleweight division. The hard-hitting Houstonian was expected to go some rounds against Chordale Booker, a well-regarded, tricky veteran from Connecticut, in a fight that was billed as a competitive, all southpaw match-up. But Williams, who goes by the moniker ‘Ammo’, barely broke a sweat; he mowed down Booker in a single round.

The 26-year-old pounced on Booker, 30, at the opening bell and never looked back. After a combination by Williams staggered Booker, dumping him into the ropes, referee Charlie Fitch had no choice but to issue a count. Booker managed to land on his feet, but began to dodder, compelling Fitch to wave off the bout. The official time of stoppage was 2-25 in the first.

Galal Yafai could probably think of a year’s worth of sparring sessions in which he had a tougher time than the fight that took place Saturday night. In his second professional bout, the Birmingham native and 2020 Olympic gold medalist made short work of Miguel Cartagena of Philadelphia, stopping his overmatched opponent in two rounds of a 10-round flyweight bout.

Yafai, 29, had Cartagena flopping all over the ring in the opening round, battering him with straight lefts. Yafai continued the beatdown in the second round, but Cartagena refused to go down.

In the end, Cartagena’s seconds decided to pull the plug on their charge, telling referee Harvey Dock during the break leading into the third round that they wanted no more of Yafai.