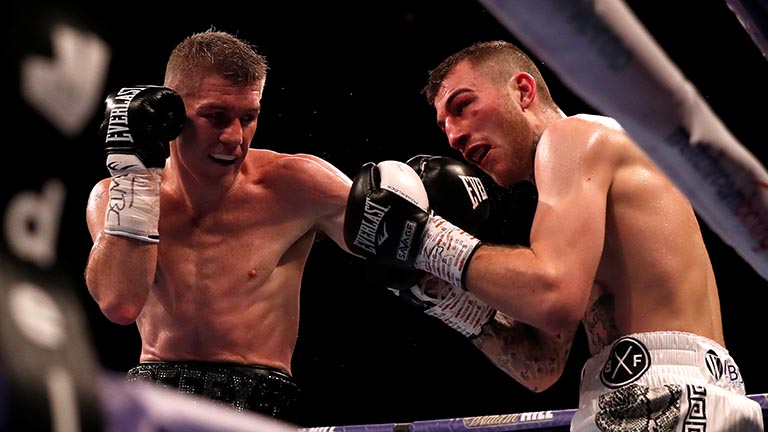 FORMER WBO world super-welterweight champion Liam Smith is looking to return to action in July and continue the momentum that started building with a fifth round stoppage victory over Sam Eggington at the Echo Arena in Liverpool.

With that March win, “Beefy” picked up the WBC Silver title in the process of breezing past Eggington in what was the first fight of his new deal with Matchroom Boxing, as well as headlining on Sky Sports in his hometown.

Now with a July date in mind, he is looking for a similar performance against another highly ranked opponent, as he targets a potential world title fight by the either the end of 2019 or early 2020.

Smith said, “July is the aim. I’ve been back for a couple of weeks but I’ll leave Eddie Hearn and MTK to sort an opponent out. Last time out in Liverpool was great with Matchroom and fighting on Sky Sports in front my of hometown Arena was exactly what I set in my head.

“People may have thought I was overlooking Sam but it went right how it should have. He was a good opponent for me then because everyone knows how game he is and I’d been out for about 10 months, so it really could have been a banana skin, but with the situation being how it was, it went exactly as planned.”

Smith has plenty of targets on his radar, however the talk of a potential all-British clash with Kell Brook, who stepped up from welterweight following his loss to Errol Spence Jr in 2017, has been intensifying in recent months.

Smith added, “It’s on my radar and a fight that I would like in the future, as it’s a big fight and those are what I want to be in. If it’s not a world title fight then a fight with Kell certainly interests me and talk on social media about it means it isn’t going to go away.

“I even did a question and answer on twitter on the way to Nottingham and there was loads of people asking when I’m going to fight him. He’s lost his chance to fight Amir Khan, so that must mean I’m the next pick for some people, so if he does want it and it makes sense at the time for both us, I’m here and I’m not going anywhere.

“My career doesn’t revolve around a potential fight with him. I signed with Matchroom so they could move me on in my career, not to fight Kell Brook. The plan was always fight Eggington, then a better opponent after that before I target a massive fight in my third one. Matchroom can propel me into the fights that I want to be in. If that’s what it is, then he knows himself he just has to say the word and the fight is on, as anyone who knows me are well aware that I will fight anyone.”

Since a defeat to Saul “Canelo” Alvarez in September 2016, where he lost his WBO world title in Arlington, Texas, Smith has only fought five times, including the win over Eggington in March. For Smith, he is confident that activity will be the difference between winning and losing those hard fights.

After a four round win in Spain, Williams engaged in a bitter rivalry with Liam Williams, getting the better of him twice, before losing to current WBO king Jaime Munguia, a fight which the 30-year-old would happily take again.

“I’ve never had a schedule where I fight in March and then July. My last couple were Williams in April then in November, before fighting Munguia, in a loss that still really grates on me, in July and then obviously Sam in March. It’s not the biggest load of fights in two years, so if I’m fighting three times this year give me anyone out there as I’ll fancy my chances, but if I lose then there is absolutely no excuses,” he said.

Family is never far away from the discussion with the Smiths. Stephen returned last Friday in Nottingham, picking up a six round win, following his recovery from a horrific ear injury at the end of 2017, whilst Callum, who is the WBA champion at super-middleweight, is about to be handed a huge opportunity in June, when he defends his newly won world title at Madison Square Garden in New York City, most likely as chief support to Anthony Joshua’s defence of his heavyweight titles against Andy Ruiz Jr.

“The only thing Callum needs now is that exposure in the States to get his name out there and potentially towards a fight with the likes of Canelo. All the people in boxing know who he is, but he needs to get out there for the public to see him and get established starting on June 1 when he fights on the Joshua bill in New York, before going onto something bigger and unifying the division because he’s the best there is, hands down,” Liam said.

As someone who has shared the ring with Alvarez, Smith is well aware of the threat that the Mexican superstar brings. However, he is confident that his younger brother has all the tools to get the better of Alvarez should the pair meet. “I’ve always said Callum will beat him. I’m a big Canelo fan, not just because I fought him, as I really rated him before that but size is a big part of boxing. With Callum you’re not fighting someone who’s a big lump and quite good, you’re fighting someone who is massive at the weight and is not just interested in getting a nice payday. He can do everything,” Liam said.

“I’d fancy my chances against bigger men who aren’t the best, but when you’re fighting a man whose big and also very good, it is twice as hard and that’s the difference with Callum, which Canelo will find out if they do fight.”