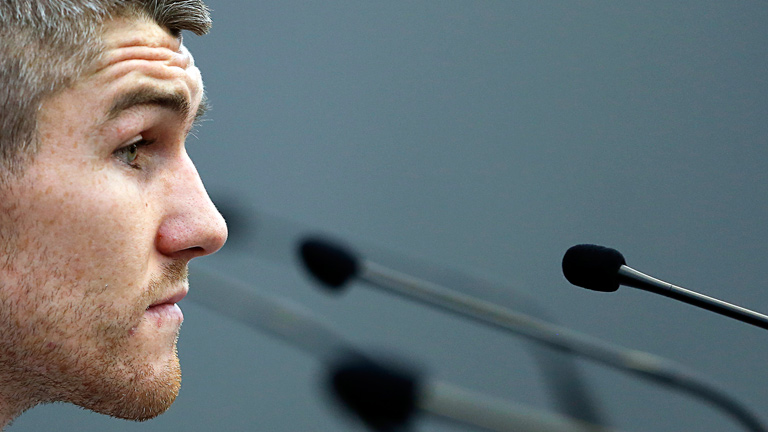 The threat of Canelo Alvarez, cut eyes, crooked judging do not bother Liam Smith one bit

LIAM SMITH has everything stacked against him, but he doesn’t care. He’s the champion that no one knows, the underdog in an alien land, merely a platform for Canelo Alvarez to win another world title. And today, American journalists noticed a scar above his right eye.

The wound can be traced back to a sparring session with countryman Kell Brook, who was also preparing for his own superfight – against Gennady Golovkin, the man whose name has been uttered more times this week than Smith’s. Liam and his team insist the injury is not an issue going into the biggest fight of the Englishman’s life.

“There’s no concern over the nick, it happened 10 weeks ago,” Smith said. “I took a week out and it’s fine. It took a couple of stitches, and it has not opened up since, it’s been fine in sparring. The blood wouldn’t run into my eyes anyway, it would go down my nose.”

Smith, who has been relegated to the right side of the fight posters, and will enter the ring first despite being the WBO super-welterweight champion, is here to fight. From the moment this contest was announced the Scouser has thrived in the role of the underdog, and throughout this week has been a model of quiet determination.

In contrast, Alvarez has appeared uneasy at times, yet remains the favourite inside the impressive AT&T Stadium with good reason. Alvarez is regarded as one of the best fighters on the planet, pound-for-pound, and can list Miguel Cotto, Amir Khan, Erislandy Lara, Austin Trout, Shane Mosley, and James Kirkland among his list of victims. Only Floyd Mayweather has beaten him.

This is a huge step-up for Smith. But for him, despite the change of scenery, the incessant media attention, and the lack of faith, this is just like any other fight.

“We are relaxed, there is no point in being nervous, and we are here to fight,” said Smith. “People think it’s a downpoint for me [staging the fight at the AT&T Stadium] but it will be a night I will never forget, beating Canelo Alvarez in front of 50,000 people.”

On Wednesday night, Smith enjoyed an evening with his team, and members of the media. Elsewhere it was rumoured that his opponent was working hard to lose the last few pounds to get down to the 154lb limit – a weight he hasn’t achieved since losing to Floyd Mayweather in 2013.

Tomorrow, his team will grow as his fighting brothers, Stephen, Callum and Paul, join him in Texas.

“When I am in the ring, you just hear certain voices, everything else is just a blur,” Smith said about the benefits of having his brothers nearby. “I will hear my team, my brothers. Nothing else. One punch can change a fight – I respect his power but he had better respect mine.”

Alvarez will undoubtedly approach this fight like he has every other, with victory in mind, and with complete respect. Some observers – including Joe Gallagher, Smith’s trainer – are predicting that Canelo will attack from the start in an effort to finish the fight early. Undoubtedly, Alvarez is under pressure to make a statement. It’s the kind of pressure absent from the champion.

“I know we have done everything asked of us,” Smith said. “We are ready to make a statement. If he comes and comes [after me] early, he’s going to be in for a long night.

“He’s not a massive puncher, there are bigger punchers out there. I am not here for a slugfest, there are times when I am going to box, others when we will be fighting.

“Not many have had the balls to hit Canelo’s body and I am happy to stay in the pocket and hit when I have to. I will be shocking the world. The eyes of the world are on this fight, when I beat Canelo I will be the new kid of the block.”

Smith rejected suggestions that he must stop the favourite to win, refusing to dwell on the possibility that he could get ‘robbed’, should the contest go 12 rounds and to the scorecards.