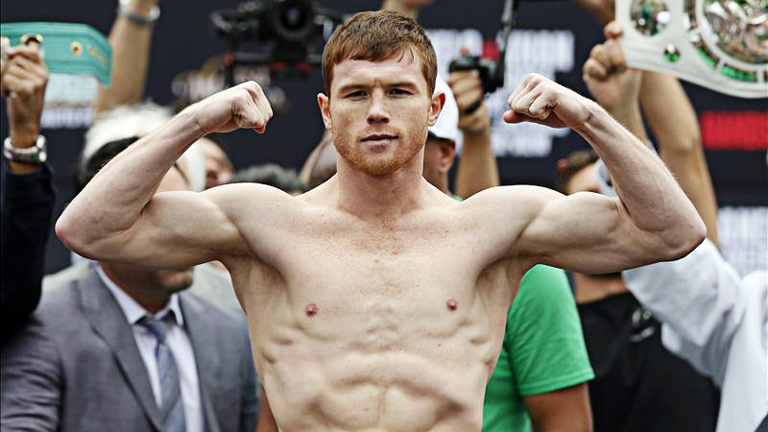 The story of the Liam Smith-Canelo Alvarez weigh-in

MUCH of the talk in the build-up to Canelo Alvarez’s challenge to unfancied WBO super-welterweight champion Liam Smith, was that the Mexican was struggling to make weight. Smith’s trainer, Joe Gallagher, promised there would be no fight if Alvarez – who has spent the last three years campaigning above the 154lb limit – failed to come in at the contracted weight. Yet a naked Canelo skipped on and off the scales quickly, before his weight was announced to the crowd at Arlington’s AT&T Stadium as 154lbs.

The British trainer was afterwards dubious about the amount of time Alvarez spent on the scales, but is content with what transpired, and the fight goes ahead. Liam Smith, yet again a picture of confident relaxation, also came in at 154lbs.

The champion has somehow managed to keep himself in a bubble of concentration since arriving in Texas, the size of his task not affecting the travelling Scouser one bit. Throughout the week, “Beefy” has played role of the calm and collected underdog perfectly, one focused only on the job in hand. But at today’s weigh-in, an all-singing, all-dancing, extravaganza of typical American excess, Smith got a taste of what will await tomorrow night.

Smith made his way to the stage as Oasis’ swaggering Rock N’ Roll star boomed through the venue. His image could soon be seen on the enormous screens above the stage, and in true pantomime style, Alvarez fans booed the Englishman in a way he has probably never heard before. Smith smiled,  amused by the reaction, and punched his fist into the air in defiance.

In contrast, Alvarez, his sunken cheeks hidden slightly behind dark glasses, was emotionless as his fans roared approval. The former WBC middleweight champion has cut a solemn figure this week, the strain of getting down in weight undoubtedly playing its part.

“He looked like he looked yesterday [at the press conference],” said Smith. “He shouldn’t be applauded for making weight, that’s what he’s supposed to do. If he struggled to make weight I’ll break it out of him.

“The last time he was under 154 he was dead on his feet [against Floyd Mayweather in 2013], but he was against the best fighter in the world. We’ll see.”

To many fans, Smith is an unknown. Highlight reels played on the big screens before the fighters emerged; Canelo could be seen pummeling fighters like Miguel Cotto and Amir Khan, with Smith’s victims far less noteworthy. But the outcome will not be decided by what has taken place before, only what occurs from now. And several insiders, like Khan, Virgil Hunter and Freddie Roach, rightly recognise that Smith is indeed far better than his 23-0-1 record suggests.