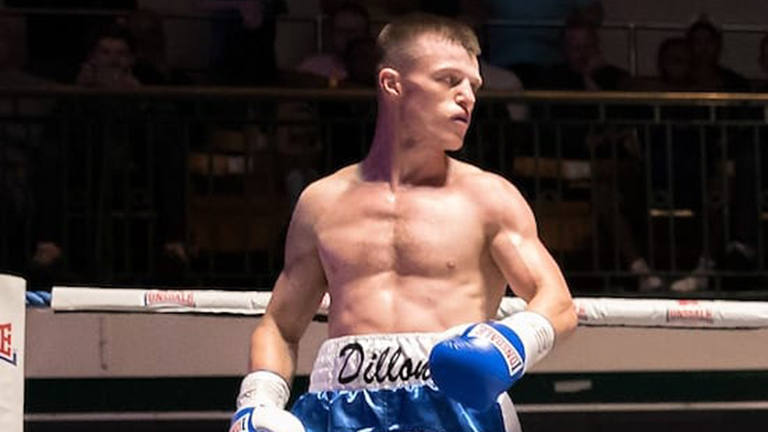 Liam Dillon will fight former footballer for the Southern Area crown on Saturday. He speaks to Chris Kempson

Confident Dillon known by his trade slogan of “I’ll fight anyone”, has no fears about climbing the heights of boxing’s paid ladder, as he is a scaffolder by trade. The former Waltham Forest amateur has progressed to eight straight victories in the paid code, with just one victory coming inside the distance, although this statistic in no way belies his powerful punching prowess as his ring progression has been at the cost of some  very good quality and meaningful opponents.

Liam is a very keen Chelsea fan and his opponent, veteran 37-year-old Dave Birmingham from Portsmouth, is a former professional footballer, with Pompey and Bournemouth among his sporting CV. He has eight victories (three inside) and three losses all by way of stoppage on his ring record and has fought before for and lost for the Southern Area lightweight title. Those losses may well show a certain vulnerability and fragility about the south coast man and will not have escaped the notice of Dillon nor his experienced coaching team of Steve and Bob Kipps. The Kipps father and son team have already guided two boxers to Southern Area titles, Ian Napa at flyweight and more recently Matthew Chanda at super-bantamweight; a Dillon victory would complete a perfect hattrick for this coaching duo.

Talking ahead of the fight Liam said, “I’m very excited about this fight. It’s my first title fight, I’ve been putting a lot of work in the gym, I’ve been improving with every fight and I’m looking forward to delivering on the night. I’ve heard my opponent is bringing plenty of support from his hometown.  He’s an ex-professional football player so he’s done very well to reach the top of two crafts. I’m expecting a hard fought contest but from how I’ve been working in the gym, I’m confident the title will be mine on March 9.”

Dillon is a strong, tough fighter, very fit and well focused for the biggest test so far in his fledgling professional career and victory at this level will get him noticed among his weight division and can well lead to more lucrative fights during the year.

Certainly, Birmingham will give it his best shot as, especially as at his age, defeat will leave him with nowhere really to go in his latest sporting venture.

Dillon with his youth, strength and desire should triumph and may have to travel the distance to land his first professional title.

Tickets for the show are available now from Myfighttickets.com and of course Goodwin Boxing.