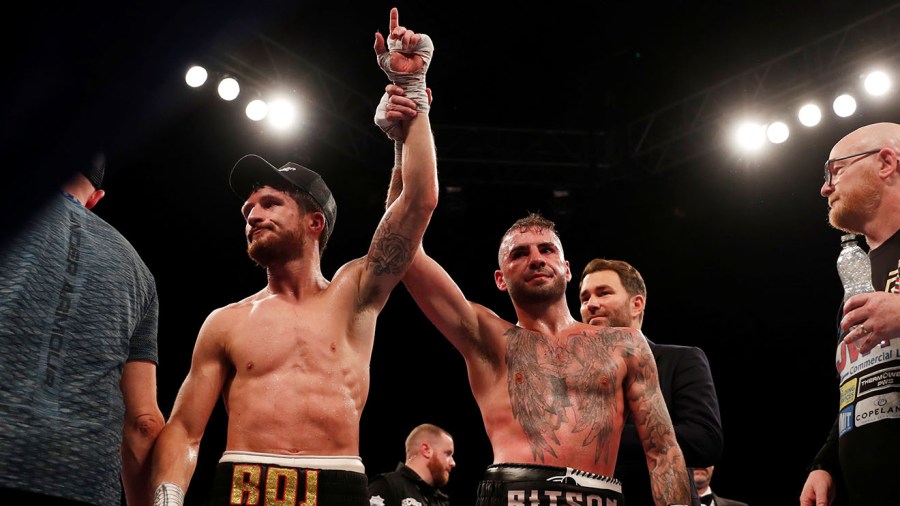 Lewis Ritson's next dream is a stadium fight with Josh Taylor for the world title. Speaking exclusively to the fighter and his promoter Eddie Hearn, John Dennen finds out how they plan to make it happen in Newcastle

LEWIS RITSON sits back in an armchair, his feet up, legs stretched out. He has just completed a vicious 12 rounds with Robbie Davies, winning a gruelling but unanimous decision. Late in the night in Newcastle, as his changing room empties he is already beginning to formulate his next dream.

“I feel spot on. I feel alright,” he says cheerfully. “I was never hurt, never wobbled.

“I was impressed with him being tough, I didn’t think he could take some of the shots. I thought I could have got him out of there late [but] he was riding the shots quite well.”

“I thought I was countering him quite well with the left hook,” Ritson continued. “He was using his strength and it was working for him.”

The abiding memory will be the tremendous reception Ritson enjoyed at the packed Utilita Arena in his Newcastle hometown. “Obviously Josh Warrington’s got a strong thing with Leeds and I think we’re up there with him,” he told Boxing News. “I could have sold a lot, lot more. But partly that was down to Robbie as well. It takes two to tango. The bad blood and the arguments and the daft spats that we’ve had has got the imagination of the crowd and it’s sold out double quick.”

One of the “daft spats” was taking place the previous night. A fire alarm was set off in the fight hotel. Davies had already moved to other accommodation but he blamed Ritson or at least his supporters, while Ritson maintains he’s being framed…

But, regardless of the shenanigans on the sidelines, the two staged a fantastic battle. Given Ritson’s fanatical following taking this fight in the first place was risk. Defeat, after he’d already lost at European level to Francesco Patera last year and the last time he boxed in Newcastle, would have set him very far back.

“I just feel like you’ve got to put these guys in with each other. It’s a gamble,” promoter Eddie Hearn said. “If Lewis Ritson loses to Robbie Davies then St. James’ Park goes down the drain. But we represent Robbie Davies Junior, they both made a lot of money, it was the right fight for both, there was that bad blood, we sold 9,000 tickets. You’ve got to let them fight.”

But now he is setting his heart on boxing at St. James’ Park, Newcastle’s football stadium. He wants to fight Josh Taylor there for the world title. “Tonight I think that I’ve shown that domestically, apart from Josh Taylor I’m the top 140-pounder in the country now and I want to push on,” Ritson said. “Robbie has proved that he is at least world fringe level, he’s won the European, he’s won the British so the next step is world fringe level and I’ve beat him. So I would definitely say I’m up there now. I definitely deserve to be in the top 10. I’m just ready to go.”

“I’m not stupid. There’s massive levels between Josh Taylor and Robbie Davies,” he continued. “There’s 10 levels between Robbie and Josh. I thought I won by three or four comfortably against Robbie tonight but against Josh Taylor that’s a totally different story. I’m going to have to be fully focused and try and get fitter than I were tonight and try and grind out a win.”

Taylor has a world title unification for the WBA and IBF super-lightweight crowns with Regis Prograis on October 26 in London. If he is victorious, promoter Eddie Hearn is confident he can make him a tempting offer to defend against Ritson at the stadium in Newcastle. “For me it wouldn’t be as his promoter, it would be to make him an offer. We’ve worked with the [World Boxing Super] Series, we can work with his promoters or whoever he’s with. But it’s more about making them an offer to fight Lewis Ritson at St. James’ Park. I just think that would be such an amazing achievement, to put a fight on at St. James’ Park for one of their own in a world title fight and against a Scot,” Hearn told Boxing News. “[The Davies fight] was high level. It wasn’t a British title fight, it was much more high level than that. It was a world title eliminator. Two guys who are rightfully in the top 15 in the world. I really believe Lewis Ritson is ready for a world title fight. I think that him against Josh Taylor is a brilliant fight, I really do. I think he’s improving and I think you could sell out St James’ Park and it’s a Sky Box Office [pay per view] event. But Josh Taylor’s got to win next week, which is easier said than done.”

To go from losing for a European belt to possibly getting a dream world title fight would be a remarkable turnaround in Ritson’s fortunes. He reflected, “It would be amazing if it comes off and I’m hopeful it does. That’s what Eddie’s been saying. The WBA mentioned that we would definitely fight the winner [of Taylor-Prograis]. It’s a very, very tough fight. Personally am I confident of winning? Who knows, but I’ve said it for some while Josh Taylor is a very, very special fighter. But St. James’ Park, a massive crowd in front of you… If we go out on our shield in front of St. James’ Park, in front of however many people, it would still go down in history. And I’d be happy.”